In the early days of scientific inquiry, people believed that light had to be the basic material God had used to make the universe. Whether science has served to clarify or confound its nature, the literal exploration of light entered the domain of the artist once it could be captured on film. All photographers must somehow master light to accomplish the desired effect, but few photographers have inspired me to consider the human experience of light so deeply.

Lukas Roels was born in 1957 in Ghent, Belgium and it remains his home to this day. He studied photography at the Academy of Arts there but felt the program had little to offer him, so he left after a few months and engaged in self-study. Because he wanted to be taken seriously, he did complete exams before a special commission and participated in internships at various photographers’ studios before striking out on his own. Initially, he had a brief career as a press photographer, but as that kind of work was unfulfilling, he worked his way to a professorship while pursuing the artistic side of his craft. He teaches at several schools and leads workshops for children and adults.

Roels says he got started on the “Angels of Time” series by coincidence. Although he had already been photographing the children of close friends, when he got a pair of wings as a present one day, it inspired him to begin this series using them. 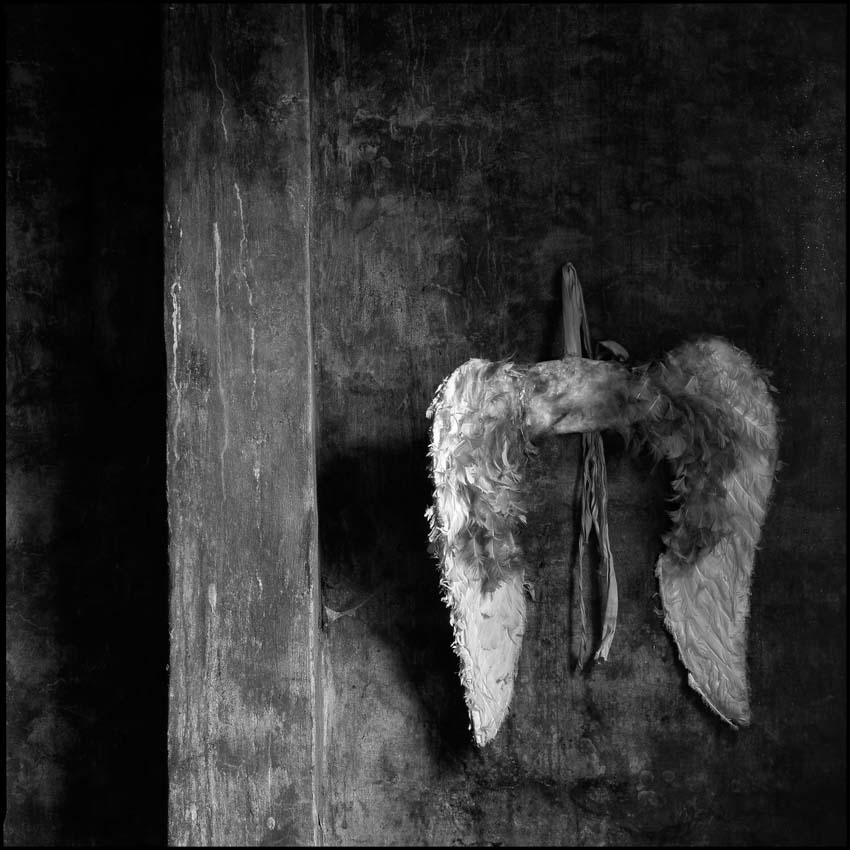 His first photograph of a child with the wings was Papi. As it was not the first time he had photographed a child naked, it never occurred to him that some people would react so strongly. Papi got her nickname from the people in her hometown who began to call her “Papillon” (French for butterfly) because of the shape of her eyes. It was later shortened to “Papi”. 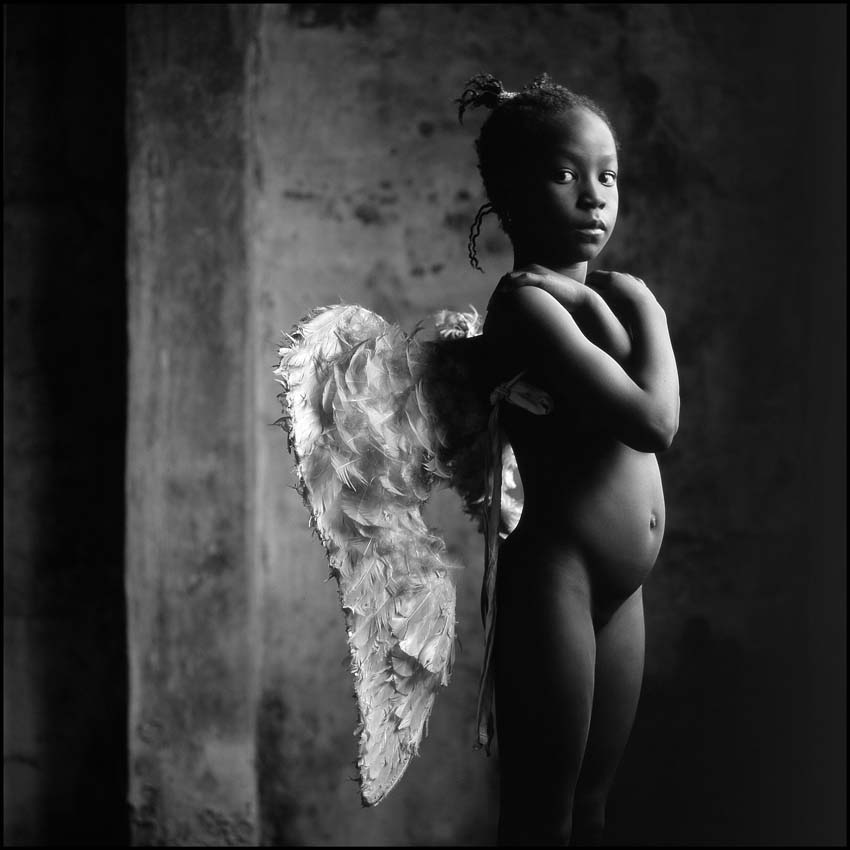 Roels was not trying to make any kind of statement at the time, but the reactions of friends were very good, so he continued to photograph their children. After Papi came Sisters I then Sisters II. The younger one, Marieke, he photographed again years later when she was about 11. So this is a personal series for the artist and his relationships with the people involved have been an integral part of his life. He hopes someday to photograph the children of his former models. He has exhibited all over the world, but in his home country he is far less well-known because of the controversy involved. I learned of “Angels of Time” when a catalog of his exhibition in Bruge was produced in 2010 and became available to a wider audience. This created the impression that he was new on the scene but in fact he has been working at a slow pace for 25 years now. With true artists, the kind of mind that can create a beautiful work is not one that is necessarily skilled at self-promotion. 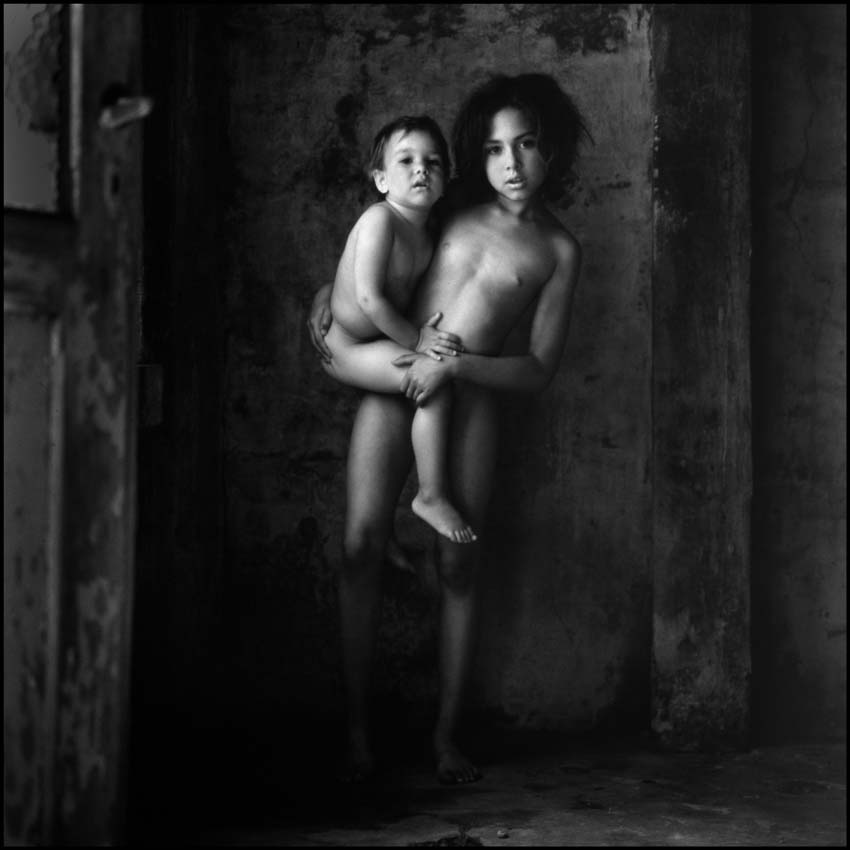 One of the aspects of children that intrigues Roels is their tendency toward androgyny. He wants to go beyond gender and show the universal beauty of a young body. There is clearly nothing sexual about it and he makes no effort to hide anything or to provoke. The artist simply gives these young people the freedom to express their natures and personalities with self-assurance. This challenges some viewers who find it more difficult looking at a photograph than a more derivative sculpture or painting. However, Roels insists there is no difference and his photography is as much an abstraction as any other medium; there is someone who poses and there is the artist who endeavors to capture an eternal moment of beauty. There is another excellent shot of this boy taken later when he was 13 called Death of an Angel which can be seen on his website. 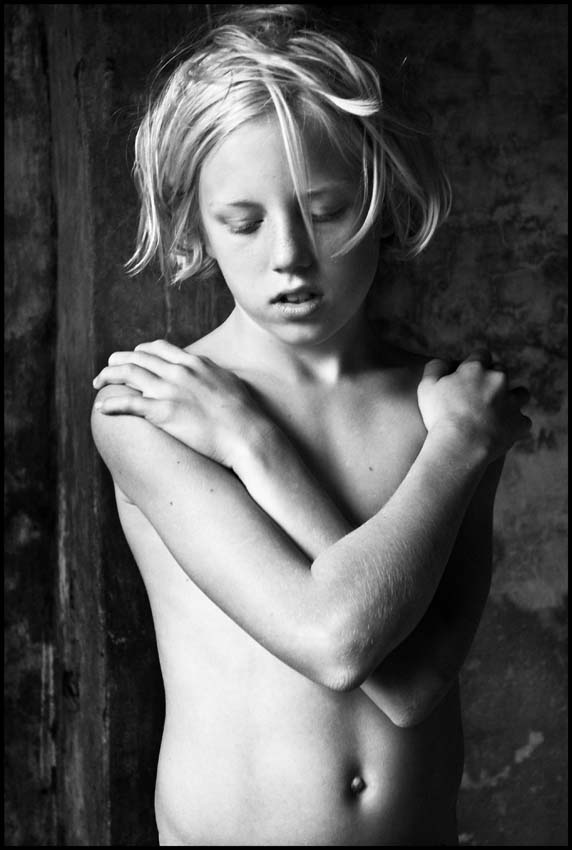 In a country with a strong Catholic heritage, it would have been hard for Roels not to assimilate some of its iconography, such as angels’ wings symbolizing spiritual flight. Real children are earthbound, yet it does not seem incongruous for them to have wings. It is as though they enjoy a grace period of innocence where adults treat them with tender reverence. The artist uses natural daylight exclusively, and though its intensity may verge on harshness, it never diminishes the delicate and subtle features of his subjects. In most cases there is a strong suggestion that the light is coming from above: a heavenly light. 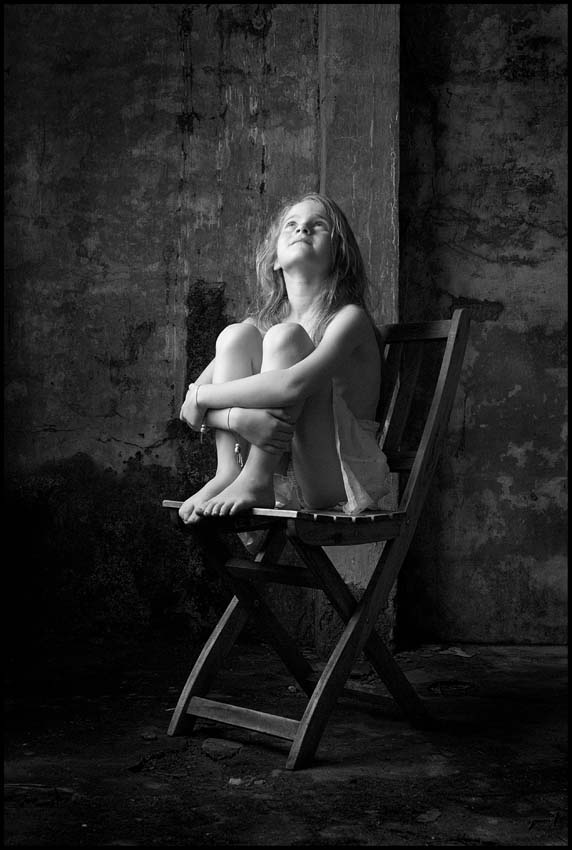 The older and perhaps more vital of Western Europe’s spiritual legacies is the Classical. Pagan symbols have much power and poignancy when conveying the pristineness of young beauty. 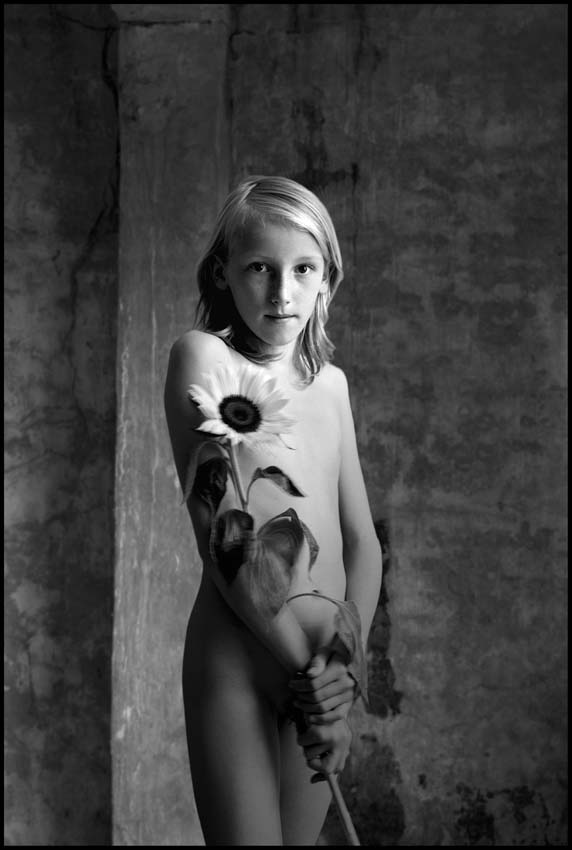 At first, I did not notice the exquisite quality of Roels’ compositions, but when a friend of mine was moving, he asked me to hold some of his prints for safekeeping until he settled in. I hadn’t realized how different the same image can look in a larger size; the A3-sized print of Our Days on Earth took my breath away. After closer examination, I noticed that it brought out a kind of horizontal rippling of light and shadow. The vibrancy of the effect was further enhanced by the girl’s expression of joyful exuberance. It is not shown here because doing so might cause problems for the artist. Although the girl and her mother were pleased with the results, the father (and ex-husband) has taken exception with its public exhibition. Fortunately, it can still be seen in the large-format book Angels of Time published in late 2011 by TimeWorks, and prints can be purchased by private collectors.

Roels, like many who came before, has had his own trial of tears with the authorities. Fortunately, he had firmly established himself as a legitimate artist before the various high-profile scandals about pedophilia. About five years ago there was a police investigation; they searched his house and questioned him for hours. They confiscated his computer and all the negatives they could find. It appears they had received a tip from a lab that made prints for him. Fortunately, there was an intelligent investigating judge who decided that this work had nothing to do with child pornography. It illustrates something I remember another artist saying about European versus U.S. courts. Being rather more artistically literate, judges in Europe seem better able to distinguish art from mere vulgar exploitation. After the judge’s ruling he got all of his property back. Now he does much of his own printing, and the larger sizes are done in a nearby lab by people he knows and with whom he has established mutual trust. To publish the hardcover book, he had to approach three printing companies; the first ones would not print his work because of the subject matter. An air of paranoia has made many people nervous about being connected with certain material involving children, despite its aesthetic or artistic quality.

Roels recently began to develop more complex compositions, introducing natural backgrounds in his new series “Les Voyages Imaginaire” (Imaginary Voyages). I have observed that it is a natural evolution for many artists to progress from a pure focus on human subjects to a stronger emphasis on backgrounds and landscapes. This image strikes me as hopeful, the dove being a potent symbol of love and peace.

It is gratifying to know that the artist is still producing new work in spite of the obstacles. This new piece is striking in how the sharply contrasting background brings out the outline of the figure, further accentuated by the dynamic pose. This image is quite sculptural in quality and I can easily imagine the ancient Greeks appreciating this piece.

Both boys and girls are well represented in Roels’ exhibitions and published work and now his fascination with androgyny has progressed another step. He has just begun work on a new project that he says is all about transgender people. Although he expects this venture to be a challenge, it won’t be the same kind as that involved in working with his child models.