Back in the days when I used to go to video stores, a random cover would sometimes catch my eye and I’d look at the description and figure it was too weird for me to check out. This was the case with a video that had three charming girls looking out at me from the box. But after exhausting the store’s inventory for new titles, I finally decided to give it a try and I was in the mood for something lighter anyway. The production quality was about what I expected but for some reason this series started to really grow on me.

It turned out that it was only one of a series called The Saddle Club and is based on books titled The Saddle Club and Pine Hollow written by Bonnie Bryant. Once one looks past the predictable melodrama, one can enjoy the kind of idyllic inner life of girls who also happen to love horses. There are three series but the first one is the best produced in 2001-2002 and is the emphasis of this post. It has the spark of youthful inspiration before getting bogged down by the ravages of its own popularity.

Ultimately, the appeal of this series boils down to two things: little girls and beautiful horses. The Saddle Club is also a kind of fantasy for young horse lovers with the lead characters spending almost all their time at Pine Hollow with the animals and learning about themselves and their world from a safe inner sanctum. Here the girls have some say and power in what transpires around them. There are adults present but they always feel peripheral to the narrative or simply serve as a catalyst for the girls’ adventures—offering words of wisdom. To the writer’s credit, there are no shrinking violets among the female characters and even when their own insecurities create dilemmas, the girls always come out on top. For those interested in horses, practical elements are thrown in giving the stories some plausibility. Some of the discs have extras about competing in show events and advice on the care and maintenance of the animals. The TV series is a joint Australian/Canadian production and due to its early popularity was cobbled together into a set of four movies. This hasty move does create some story continuity problems between Adventures at Pine Hollow and Horse Crazy, but the shifts within each movie are not too jarring. The first film The First Adventure and the last The Mane Event round out this set.

The Saddle Club proper is a core of three girls: Carole, Stevie and Lisa. 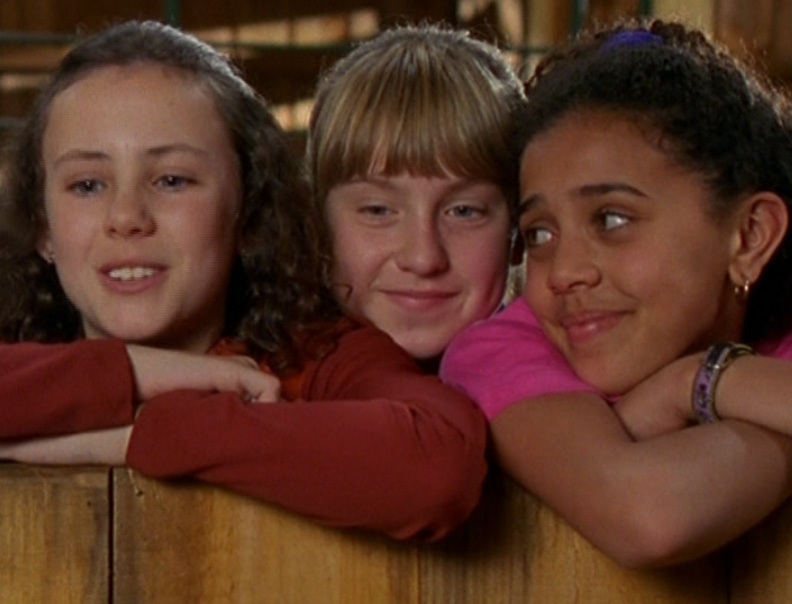 Carole Hanson (Keenan MacWilliam) seems to be the glue of the group. Between the hot temper of Stevie and the insecurities of Lisa, she is watchful—balancing out these extremes and keeping the group focused on its purpose. She has suffered the loss of her mother to cancer and used the money she got in the will to buy her horse Starlight. She also hopes to follow in her mother’s footsteps and become a veterinarian. Here she gets the news that she has been accepted as a veterinary assistant. 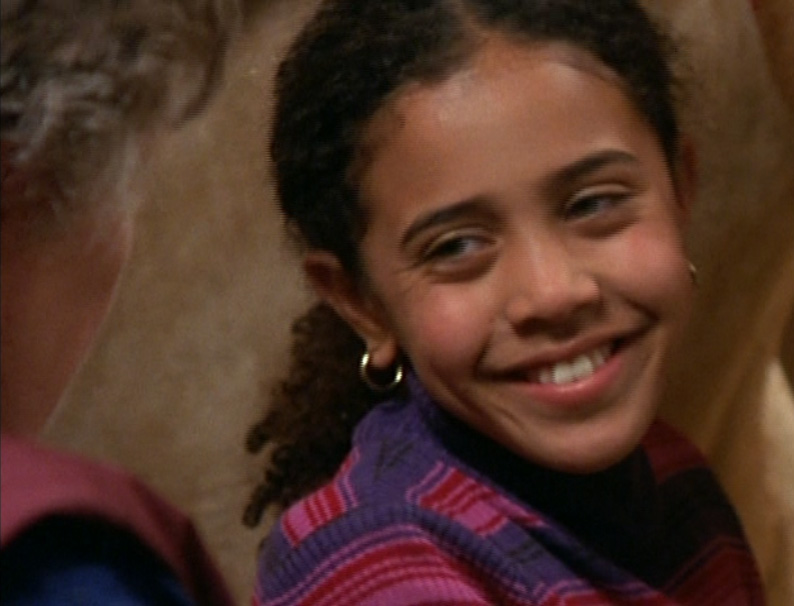 Stephanie “Stevie” Lake (Sophie Bennett) seems to be the virtuoso of the group—being a skilled jumper and doing tricks with the horses. Stevie starts out with Comanche, who is Pine Hollow’s best trick horse, but later she adopts Belle whom she rescues from an abusive owner. An amusing running story is how Stevie and Phil (Glenn Meldrum) who really like each other can’t seem to get past a series of misunderstandings that prevent them from getting together. Here she is with Comanche. 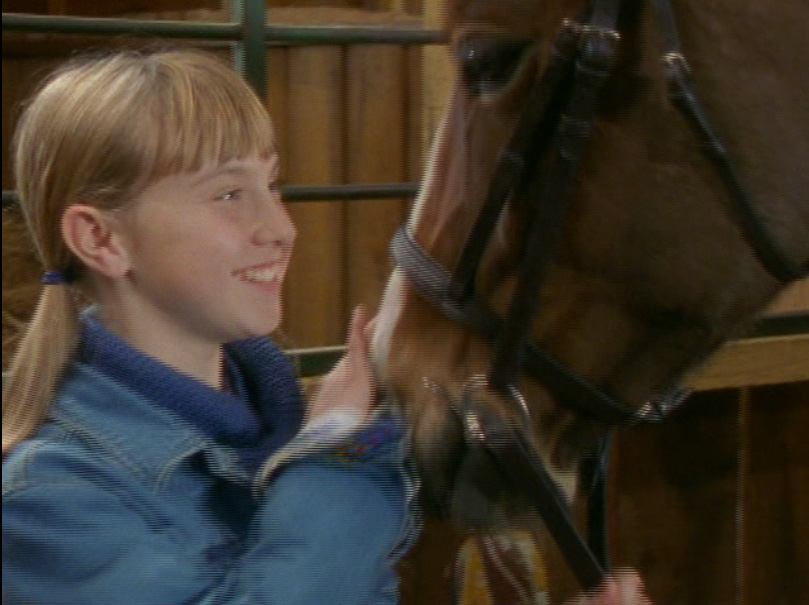 Lisa Atwood (Lara Jean Marshall) is the newcomer to the group and spends her first days desperately trying to get the approval of Carole and Stevie, but blunders always seem to get in the way until a heroic moment when she saves Stevie from one of Veronica’s pranks. An exciting time for her was when a movie was being shot at the ranch and the lead actor, who is really just a regular nice guy, takes a special interest in her. Lisa starts out with a paint pony called Patch and later promotes to Prancer. Here Patch is flirting with her before their first ride together. 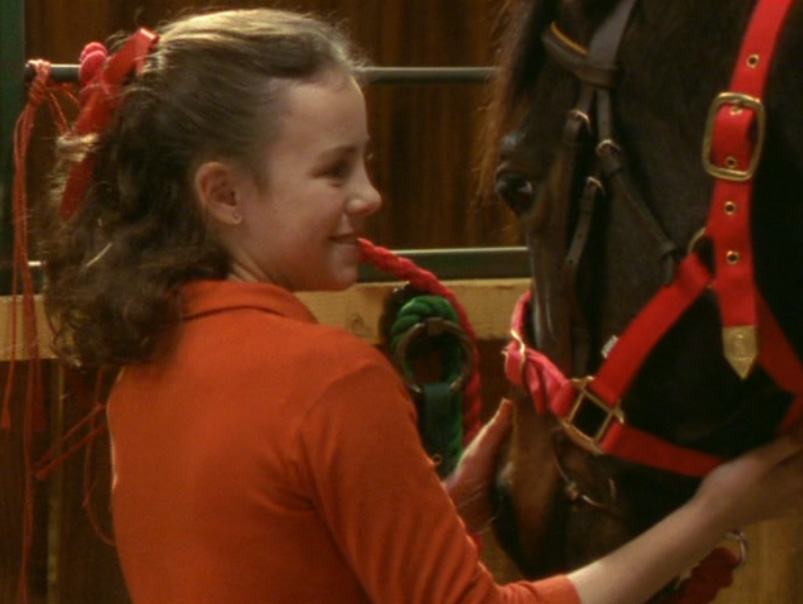 Marshall is impressive in another way; she is one of the few girls who can get away with saturated orange as her signature color. Another detail I like is how the costume director almost always has her hair in ribbons, accentuating her precious girlishness.

Veronica diAngelo (Heli Simpson) is the beautiful and aristocratic villainess at Pine Hollow. A spoiled but talented rider, she is always jealous of the accomplishments of others and brags whenever she can. She is notorious for neglecting her horses so that one of the other girls has to pick up the slack. This behavior makes her subject to pranks and pratfalls, as the other girls keep trying to teach her a lesson. Her mount is Cobalt—the most expensive horse at the ranch—who has to be put down after an accident caused by Veronica’s recklessness. Her parents later buy her a beautiful mare named Garnet. Here she is trying to manipulatively save face after being scolded yet again by Max (Brett Tucker)—the proprietor and instructor—for shirking the care of her horse. 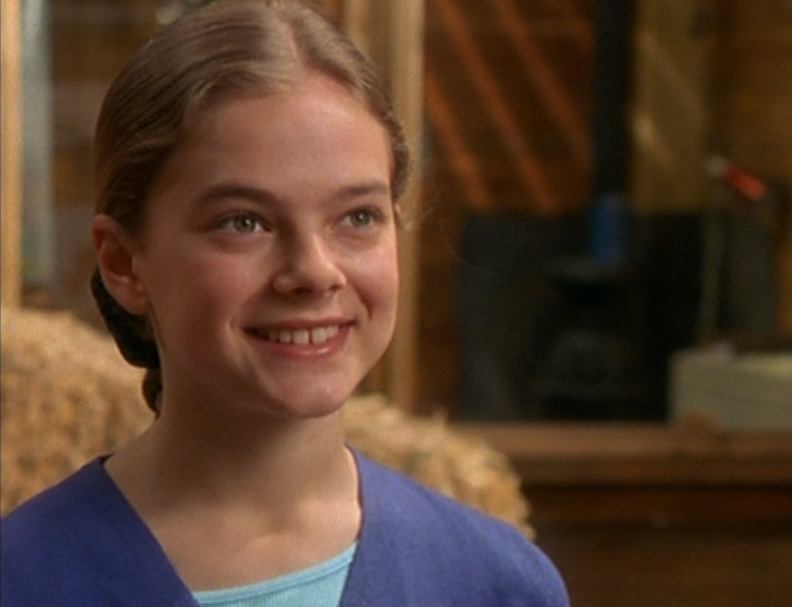 Kristi Cavanaugh (Kia Luby) is Veronica’s best friend, but they often go their separate ways in various plotlines. She is obsessed with boys and can be seen flirting with Red (Nathan Phillips) the head stable hand when there isn’t someone better on offer. Even though her family has money, she comes across with a disarming down-to-earth quality. One storyline has her seducing a visiting boy named John who is teaching the group to ride Western style. Kristi thinks he is charming and romantic, until she discovers he is only putting on an act for the sake of the workshop and is really a big geek. Her regular mount is Barq, but here she is standing by Garnet, listening to Red describe what a great horse she is. 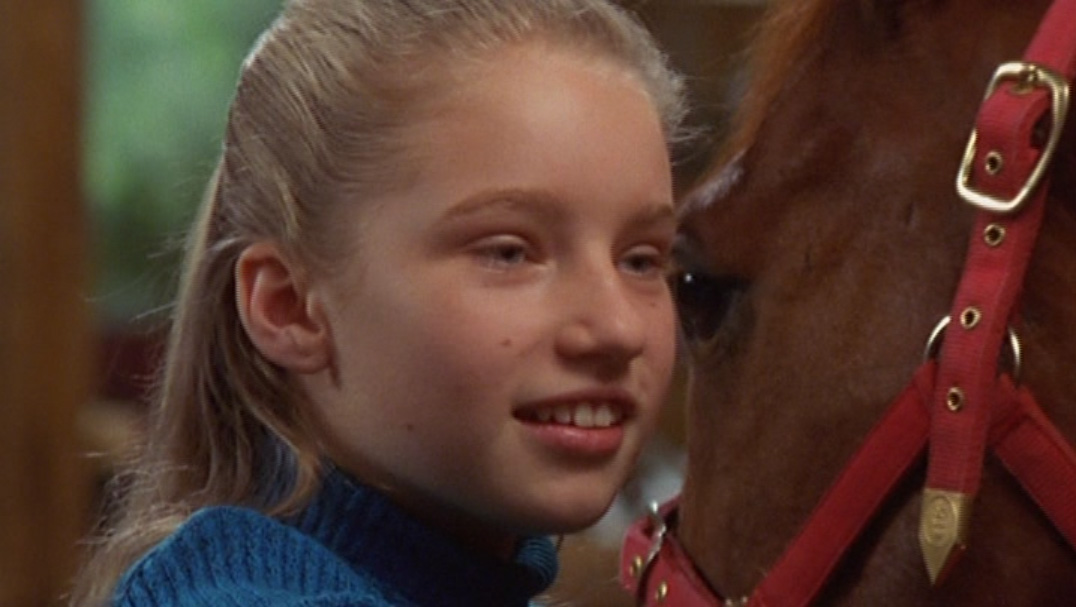 Melanie (Marisa Siketa) is Lisa’s cute kid sister who sometimes hogs the spotlight but does not yet ride at Pine Hollow. A charming storyline is one where she tries to keep the staff from force-feeding a new foal whose mother has mastitis. Max’s mother Mrs. Reg (Catherine Wilkins) helps her figure out a way to persuade the foal to take a bottle instead. Here she is in Lisa’s bedroom tormenting her about a trail ride she desperately wants permission for. 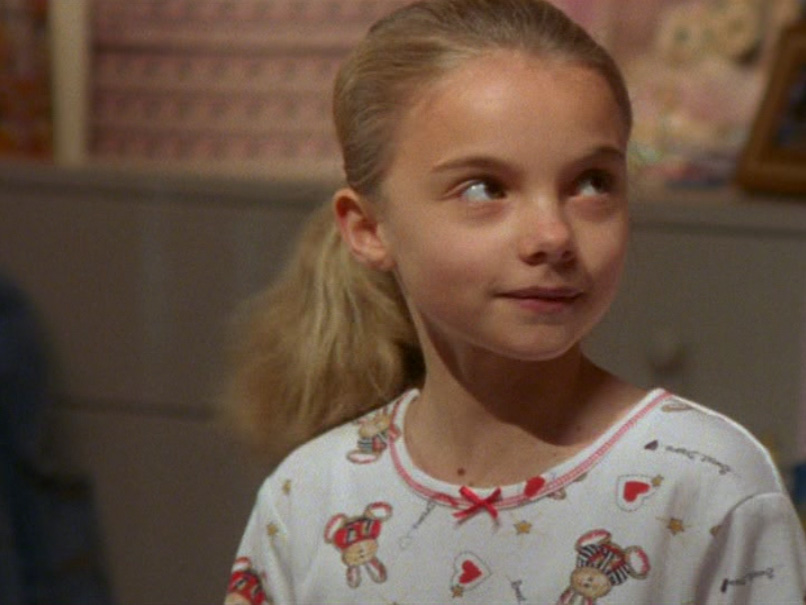 Ashley (Jannelle Corlass-Brown) is a younger rider whose pony is named Dime. When not riding, she and Melanie spend a lot of time together taking care of the horses. An amusing adventure with Ashley is when she believes Comanche has swallowed Max and Deborah’s wedding rings and follows him around all the time, waiting for the rings to pass through the horse’s system. Here she is teaching Comanche to do some new tricks which leads to the mishap. 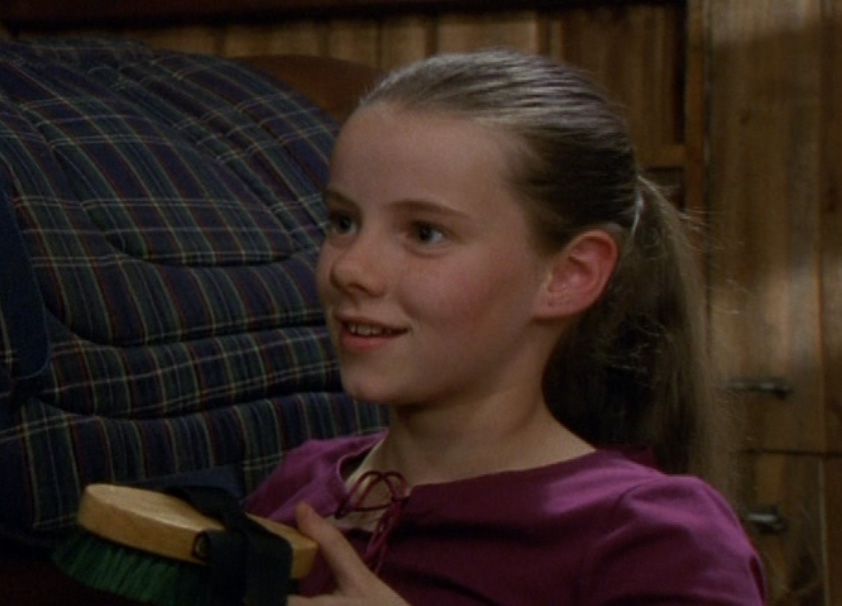 Megan (Sophie Hensser) is a simple sweet girl who encourages others and is a real team player. She competes with Kristi for a while for the attentions of John, and when Kristi decides he is too much of a geek, she tells Megan the good news that she is not interested in him. 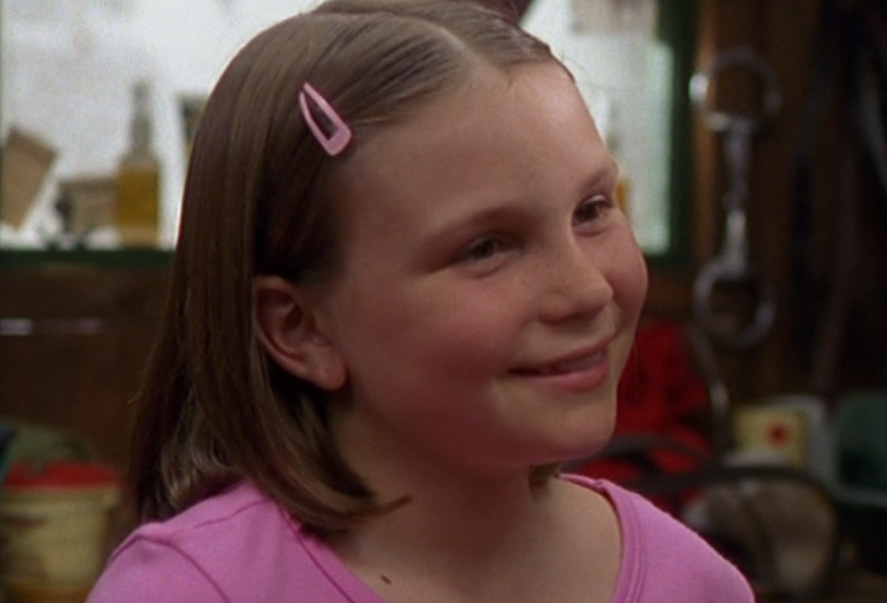 There is a feeling of genuine sorority in this program and in this scene the girls officially form The Saddle Club. The club has only two rules: they must look out for each other and be crazy about horses. It seems not to be a secret club, as other characters refer to it by that name from time to time. 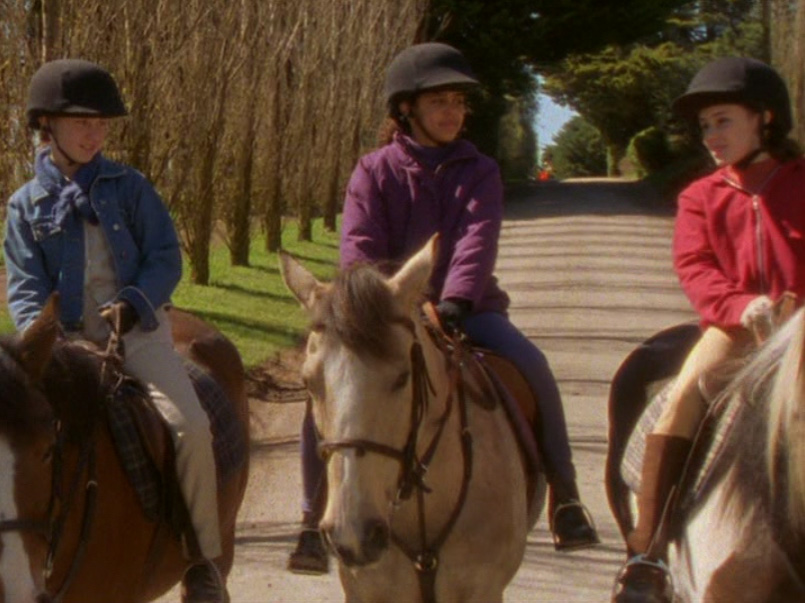 It is tempting to think that, because of the animosity of the characters, they don’t hang out together on the set. But in a way Simpson is really a member of the club, and here she is having fun with the other girls in the sound studio. 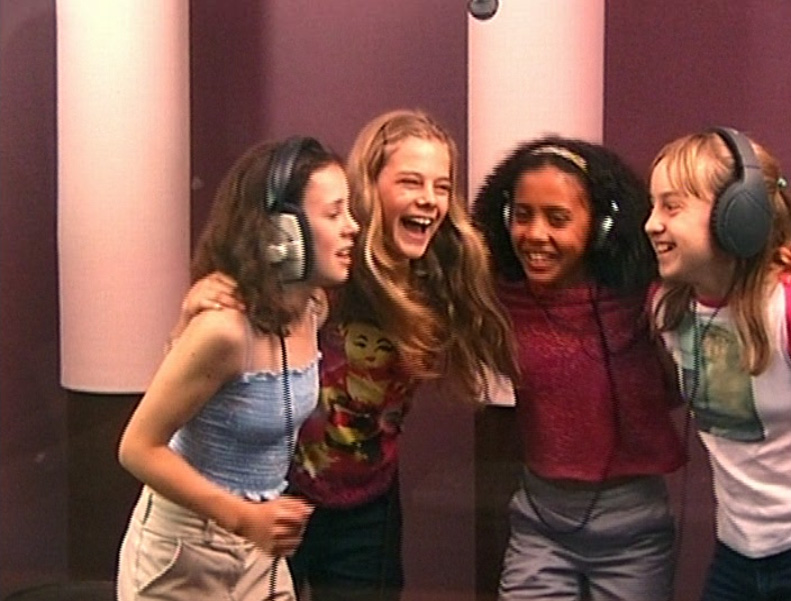 The second series was shot in 2003 and though the actresses are still young, they are noticeably older. This gives the stories the feeling of being motivated by a more teenage mentality. Melanie and Red were recast and the production style is different so it seems a very different show. Two movies from this series were made: Storm at Pine Hollow and Horse of a Different Color. A third series was made in 2008 and is a remake with all new cast but I have no idea if it is a rehash of the old stories or if new plots were written for the characters. I only became aware of it when researching The Saddle Club for this post.

Bonnie Bryant (b1957) is the author of nearly a hundred books about horses, including ‘The Saddle Club’ series and the ‘Pony Tails’ series. She has also written novels and movie novelizations under her married name, B. B. Hiller.  She began writing The Saddle Club in 1986 and although she had done some riding by that time, she intensified her studies then and it was as though she was learning right along with her characters.  Born and raised in New York City, she still lives there.  In honor of her contribution to this popular series, she was given a cameo appearance in the episode ‘Star Quality’ in Season One.

[June 9, 2014] The surprise success of the series compelled the producers to create these movies which are the most accessible to most people.  The annoying thing is that there a number of continuity issues and bits of missing story that were not included in the feature length films.  I was able to watch the actual episodes from Season 1 online and get the missing pieces and have a clearer idea of the timeline.  Also, there are a few more charming girls that do not appear elsewhere and I felt like covering them here:

Nia (Hannah Daniel) has only a small part in this episode (too bad) and her odd behavior is a clue to the mystery of the Mystery Weekend. 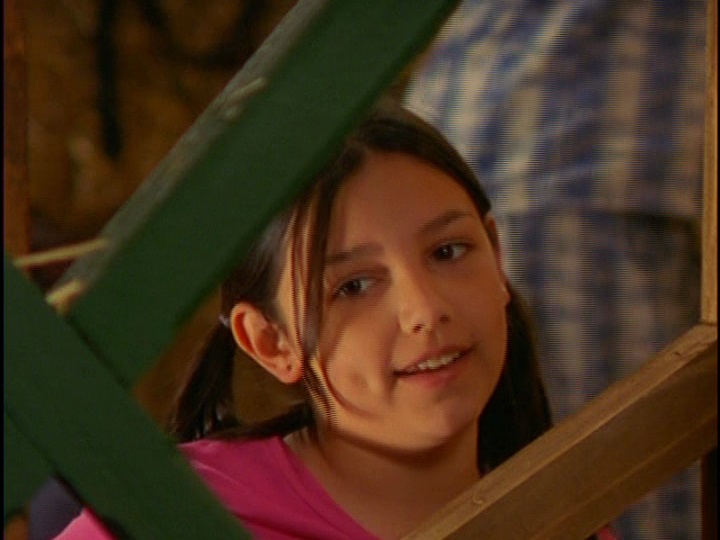 Tina (Kate Dorrington) is an old friend of Stevie’s in town for a visit but is now “all grown up” and Stevie is torn between fitting in with the “mature” girls and staying loyal to the Saddle Club girls.  Here Tina (left) is explaining why she going out with Christy (right) instead of hanging out at the stables. 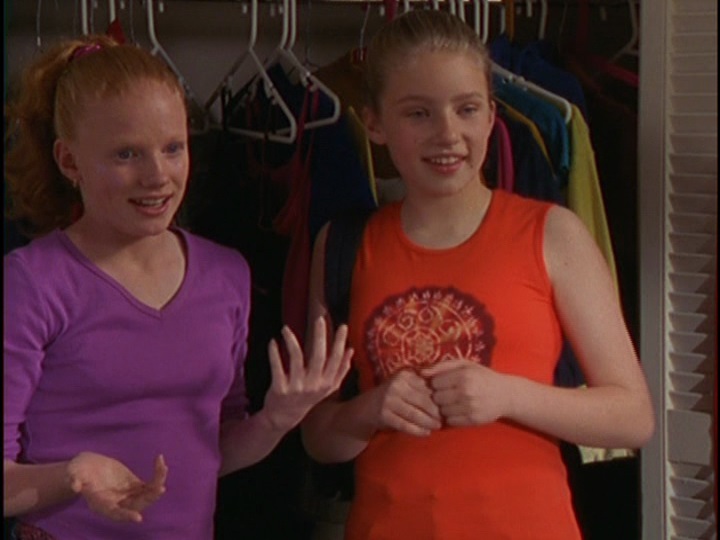 Andrea (Ashlee Kavanaugh) whose mother travels all the time is staying at Pine Hollow temporarily during an important dressage competition.  Carole, who is also competing, is threatened by the competition and feels as though she is being replaced in the Saddle Club.  I found this an odd casting choice as Kavanaugh is noticeably taller than the other girls and seems out of place when they are standing together.  Here she (left) is standing behind Stevie (right) who is serving as her groom. 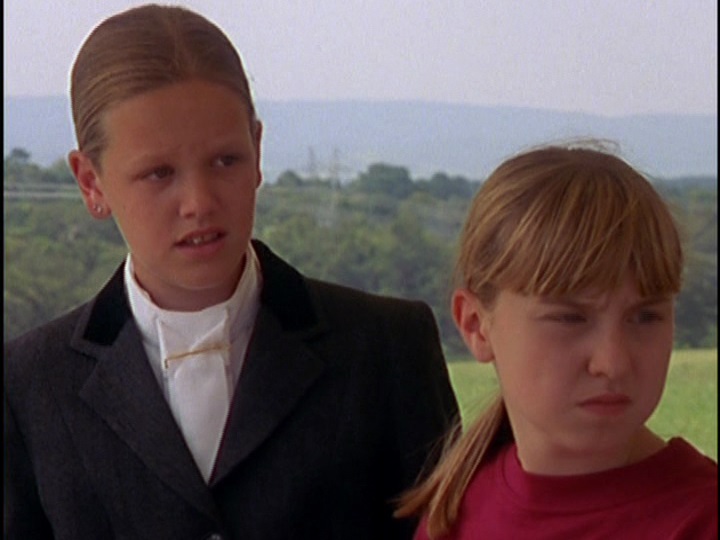 *Ray at novelactivist.com makes a point of keeping track of the careers of young people who are intellectually gifted or exceptionally talented.  He tells me that Heli Simpson participated in the International Science Olympiad, representing Australia in biology and her team won a bronze medal.  The event was covered in a documentary called Battle of the Brains aired by ABC-TV. She also pursued her musical ambitions and released an album and a single.  She is now studying medicine/surgery at Melbourne University entering the program with a perfect score, making her one of the top high school graduate students in the state.