It is not my wish to insult anyone by including this post, but as a teacher I felt it important to include material about the key players in photographic history. As an amateur art lover, an artist with whom I made early contact helped me by giving me a reading list and a list of relevant artists. That gave me a good foundation and it is my intent to do the same for readers who may not have considered the interesting historical context. About one-sixth of Cameron’s output involved children and many are girls, but perhaps not as many as it might at first appear.

Julia Margaret Cameron (née Pattle) (1815-1879) was born in Calcutta, India of a respectable English family. As her family was well-connected, she was raised to perform the kind of duties expected of a woman of her class and upon her marriage to Charles Hay Cameron in 1838, became a devoted mother of six. Cameron got a late start in photography for two reasons; the techniques were still in their infancy and she had not recognized the need for artistic expression until the children were out of the house and she wanted something to help pass the time. Sir John Herschel, an astronomer and friend informed her of this new technology and she must have at first experimented by borrowing the cameras of others before receiving her own as a gift from her daughter and son-in-law Julia and Charles Norman in 1863. This was an unusual hobby for a woman as it was a technical and messy process using wet collodion and such photographers were noted for their black fingers from handling the chemicals. She was self-taught and worked on her craft in England and then in Ceylon where she and her husband relocated in 1875. Apart from Herschel, she was friends or acquaintances with a number of noted figures including Alfred Tennyson and his wife who were neighbors for a time. Running a business was becoming a respectable practice for the upper classes in Victorian England and photographers were making their fortunes producing postcards from their images. At that time photography demanded a lot of time and money, and though Cameron wanted to supplement her family’s income with her work, that ambition never reached fruition.

Fortunately for us and for posterity, there was a resurgence of interest in Cameron’s work in the 1970s and efforts to track down her surviving photographs began, resulting in the book Julia Margaret Cameron: The Complete Photographs by Julian Cox and Colin Ford in 2003. 1225 images are known to have survived and are included in catalog form in this book. She was a prolific correspondent and was one of the most written-about women of her time so there is ample documentation about her life and artistry. She classified her work into three general groups: 1) Portraits, 2) Madonna Groups and 3) Fancy Subjects for Pictorial Effect. No matter what the theme, Cameron regarded her goal as achieving a work of beauty. Her earliest efforts did make use of the children in her life, mainly members of her extended family and those of her closest friends. Her first exhibition was in 1865 at the South Kensington Museum. Her accomplishments are even more impressive when one considers the 3 to 7 minute exposure time required. Cameron made efforts to minimize the production time, but it must still have been a formidable challenge to get children to sit still that long. The exposure times also made the modern convention of smiling for photographs out of the question, as such a tense expression could not be maintained.  Although Cameron was a perfectionist when it came to composition and effect, she was harshly criticized for her sloppy technique.  Early photography was a sensitive process; chemicals had to be applied evenly and the photographer had to be careful handling the plate to avoid dust, scratches and other marks.  To preserve the authenticity of the artist’s work, such marks were not cleaned up for this post.

Cameron regarded her early work with Annie Philpot her first official success and this image is listed as number one in the catalog. 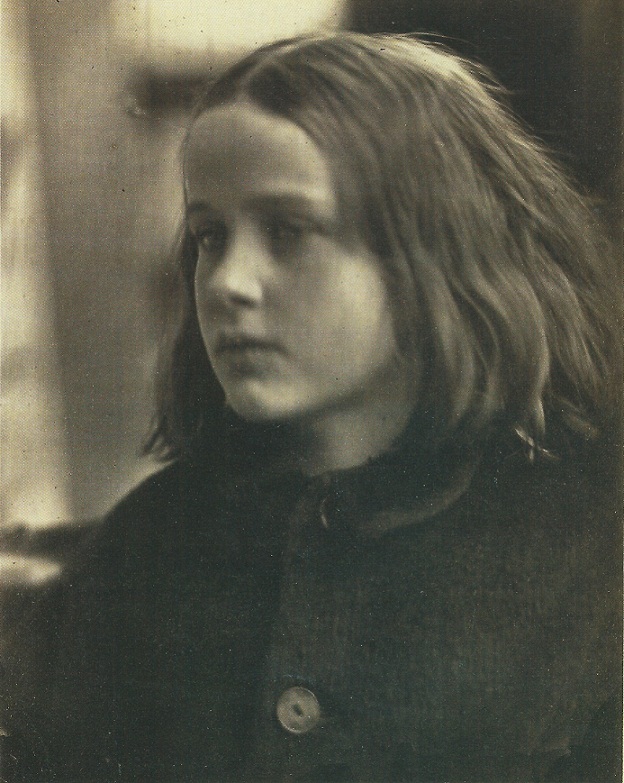 Many of her works had a sacred theme and a number of images had identical compositions and titles as she experimented with photographic effects and different versions were needed for friends and interested museums curators. I always felt that the sitters had an unusually devout expression in her images. Several of these were called Madonna with Two Children (Cat. #18). 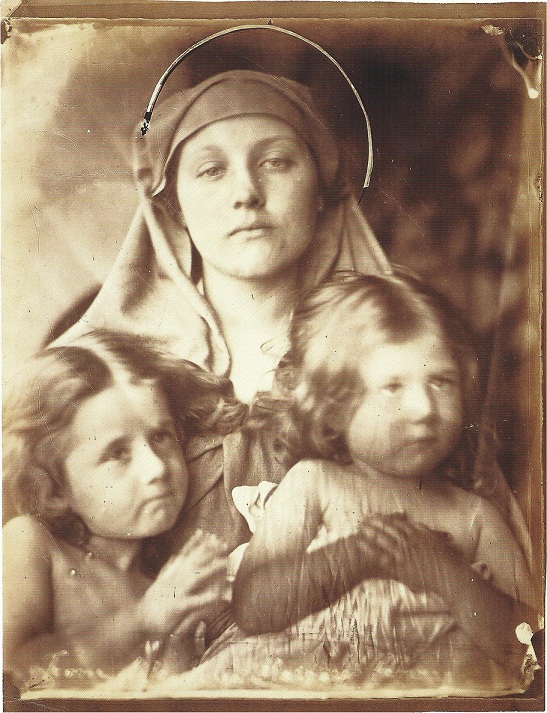 This ensemble shows some of her favorite models: Mary Hillier (one of her servants), Elizabeth Keown, Mary Ryan, Alice Keown and Mary Kelloway (Cat. #147). 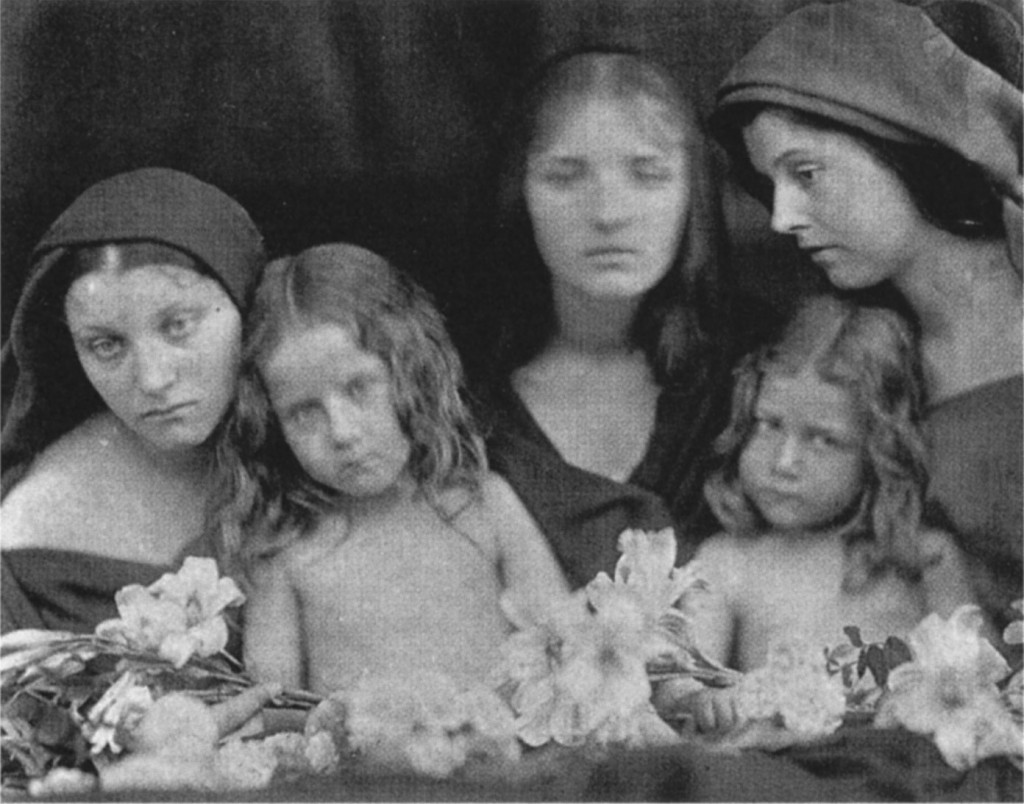 Cameron was fascinated with how the quality of a child’s skin comes out in photographs (Cat. #41). 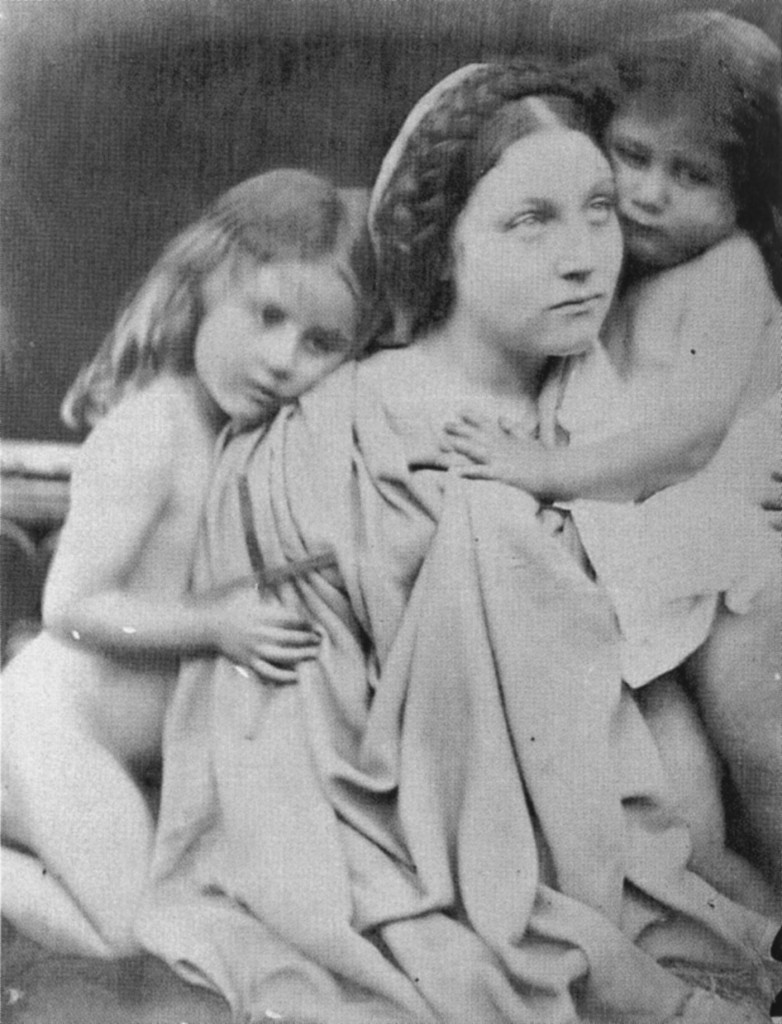 It wasn’t that Cameron was especially religious, but children of that time were regarded as pristine and wholesome and that lent well to cherubic or angelic themes. Wings could be used to produce angels and cupids alike (Cat. #889). 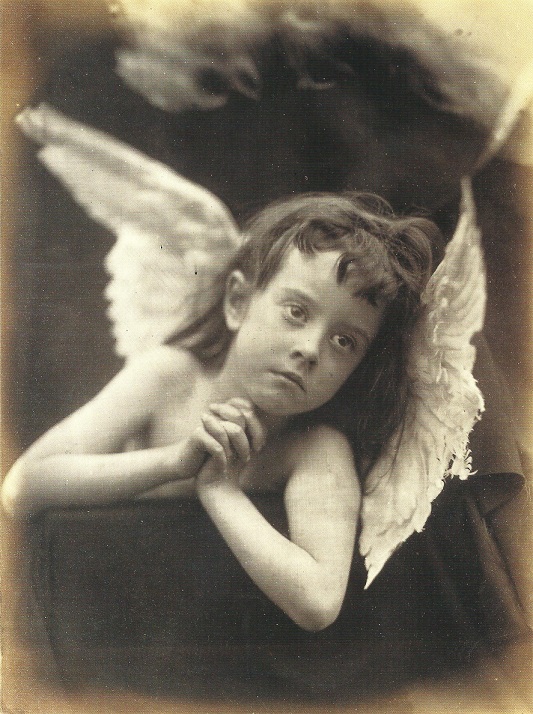 An image like this may seem a bit startling with children, but the severity of the effect might have been exaggerated by the long exposure and as children were regarded as uncorrupted, the viewer of that period might imbue such images with deeper spiritual meaning than could be achieved with adults (Cat. #858). 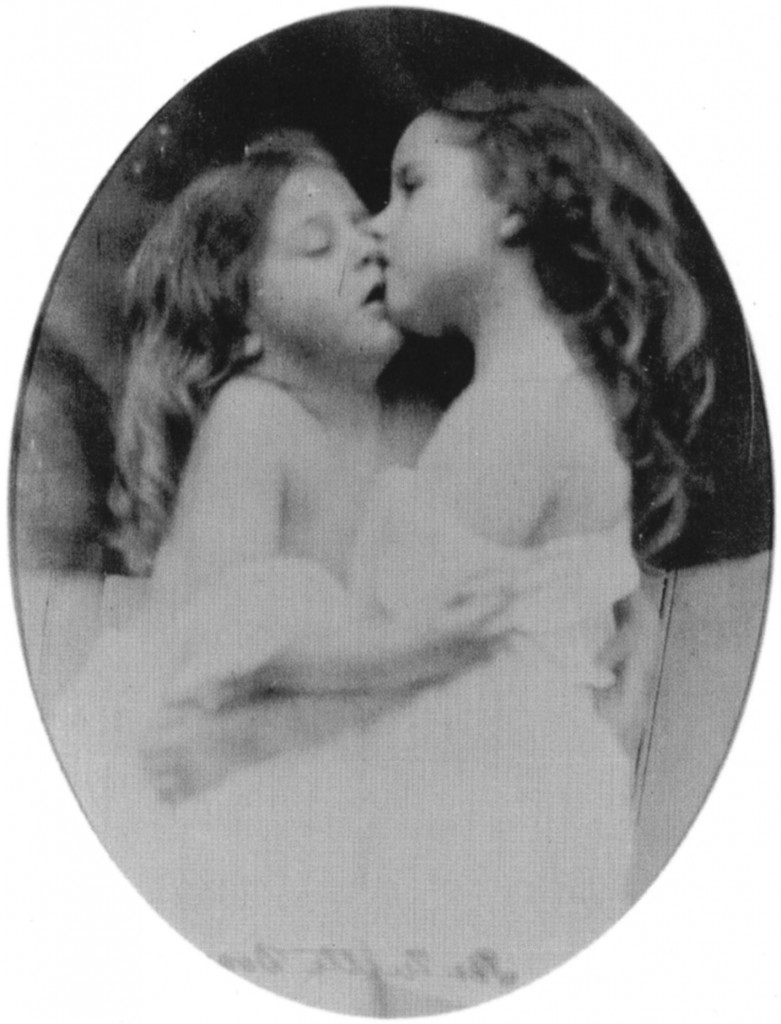 Cameron and Charles Dodgson were well acquainted and collaborated from time to time. This piece resembles his work with Beatrice or Evelyn Hatch. After seeing some of Cameron’s angels, Dodgson probably requested a “cleaner” image of the girl without the accoutrement of wings. To me, Cameron’s title suggests an eerie double meaning. The more obvious is that this piece was a special request made to order, but there is also the suggestion that such an ardent desire for this image was unseemly and precipitates a child’s fall from grace (Cat. #896). 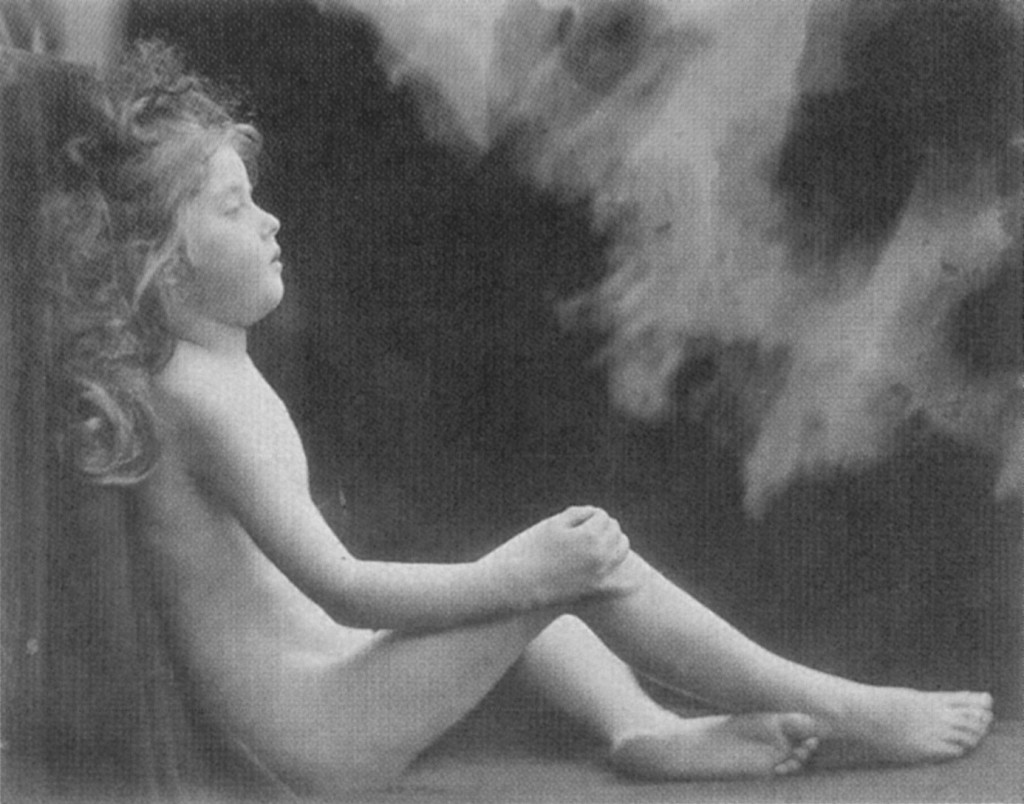 Julia Margaret Cameron – An Angel unwinged by your desire (1873)

Many times while reviewing the catalog, I was surprised that a particular image was in fact a little boy. Her soft focus and motifs naturally emphasize the feminine qualities and it was fashionable for boys in upper-class families to wear their hair long to bring out their youthful beauty. The sitter in this image was Stephen Powys (Cat. #1013). 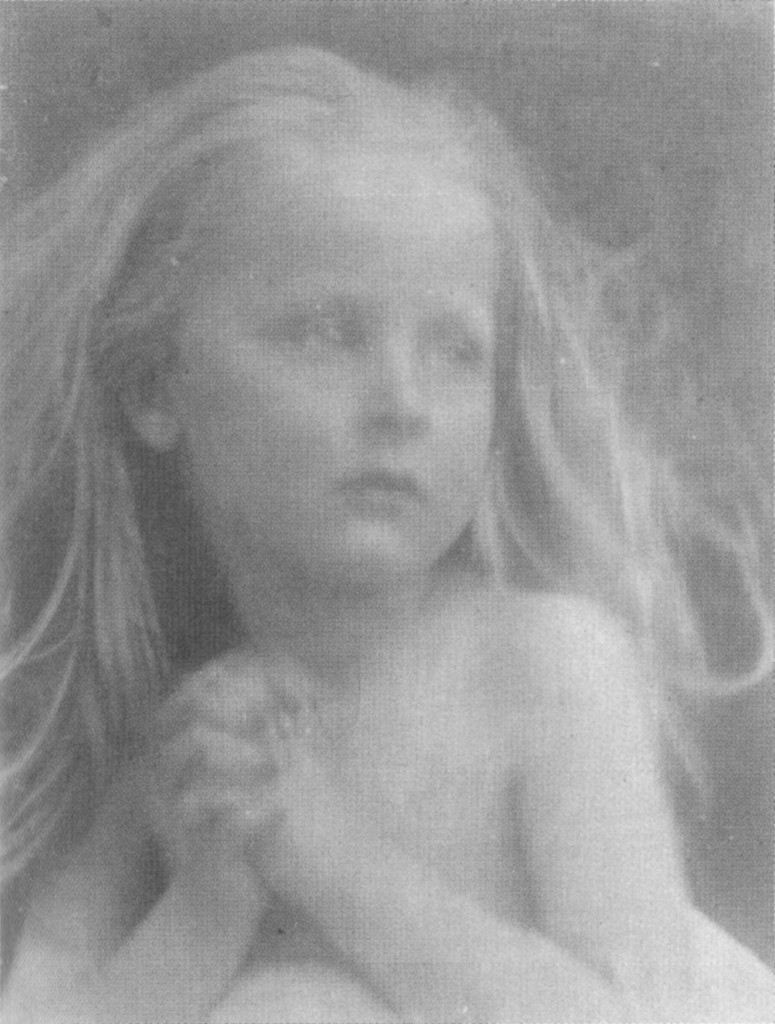 The parallels between Cameron’s and Sally Mann’s work is unmistakable. Both women, apart from being mothers, had obsessive personalities when pursuing their art. After Immediate Family and What Remains, Mann became fascinated with homemade cameras and old photographic techniques with long exposures and, like Cameron, likes the feel of handling the chemicals and other materials required in the process. This is demonstrated in the excellent documentary of Mann called What Remains: The Life and Work of Sally Mann.