In the course of updating this post, I learned that Steve Hanks died on April 21, 2015 at the age of 66.  It is particularly sad because not only did he die at a relatively young age, but his chemotherapy tired him out to the point that he could not spend much time doing the painting he loved in his final days.

I was introduced to Steve Hanks’ work when one of his pieces was used in an advertisement for a new book. I don’t know why that particular image was chosen, but even a small rendering was compelling enough for me to purchase the book and see more of his work. It was called Moving On: The Art of Steve Hanks and was published by The Greenwich Workshop, Inc. in 2007. When I received the volume it did not disappoint, and I noticed the artist had a special affinity for children, families and women. It is one of only a few that I now display proudly in my home. Recognizing the talent and appreciating the beauty of Steve Hanks’ work is one thing, but after a little investigating, there was something even more remarkable about this artist apart from some interesting anecdotes about individual pieces. Whenever people look at the books or prints for the first time, they are surprised to find that they are paintings, but even more remarkable for those with a knowledge of art is that they are actually watercolors—a medium not usually associated with this level of realism.

Since Hanks’ family moved around a lot in his youth, his way of coping was to focus on the few precious constants in his life: his love of the ocean, surfing and his art. In high school, he lived in the San Francisco Bay Area and though never an avid student, his love of painting motivated him to get a degree from the California College of Arts and Crafts, which he completed in the 1960s. He decided to establish a studio in New Mexico, where he worked mostly in pencil and oil painting. The discovery that he was sensitive to the compounds in oils forced him to abandon them and a switch to watercolors seemed a logical alternative. But he still loved the kind of realism that could be achieved in pencil and, as there was no precedent for accomplishing this in watercolors, he had to experiment with various techniques until he got the desired result. Starting in 1973 he began to get recognition for the his technical skill and the depth of feeling expressed in his work and has been receiving major accolades ever since.

There are many amazing images and stories in the book, but the one that originally caught my eye remains my favorite to this day. Notice how the translucent dress shows off the play of sunlight, the way the hair lies to create the impression of dampness, the majestic setting—both foreground and background—and the way the girl looks down in poignant self-reflection. The subject’s attitude is indicative of much of Hanks’ work, as it gives the viewer a sense of the girl’s inner world. This contributes a psychological depth to the work that makes it more than a mere showcase of technical virtuosity. His figures are rendered with a loving touch that is deeply sentimental and gives the pieces an intangible healing quality; numerous people have commented about how Hanks’ work has affected them. He insists that he is merely expressing his sincere feelings in his work, and especially with his own three children: Mandy, Travis and Kali. He is just as meticulous in planning his backgrounds, which feature his beloved West Coast beaches, the Southwest and settings in the Savannah, New Orleans and Charleston areas.

He has also enjoyed some commercial success, and some of his images have been made more accessible in the form of calendars. I had these two images framed, and they are now openly displayed in my home. What always strikes me is how he achieves the delicate translucency of the loose strands of hair, which adds a down-to-earth quality to the subjects. When researching this piece, I could find almost nothing online.  I finally learned that it was only reproduced for the calendar and was never available as a print. 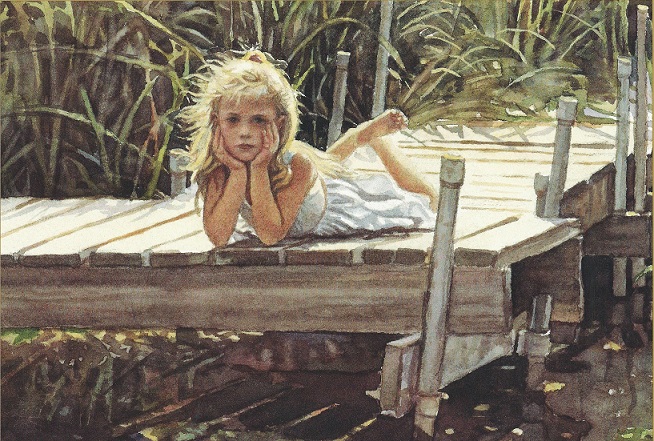 Here is one of many in an ocean setting, and again the girl seems to be engaged in quiet contemplation. 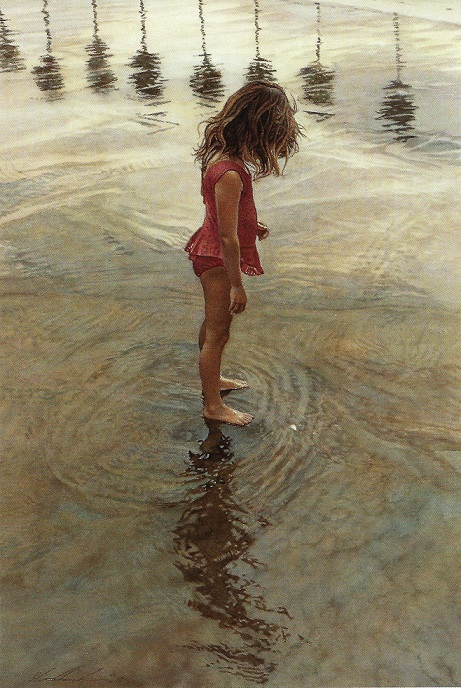 To Hanks’ mind, children are like angels and he painted quite a few of them. They have a dreamlike quality but also evoke comforting thoughts of a happy afterlife that have moved parents to tears, particularly those who have suffered tragedy. 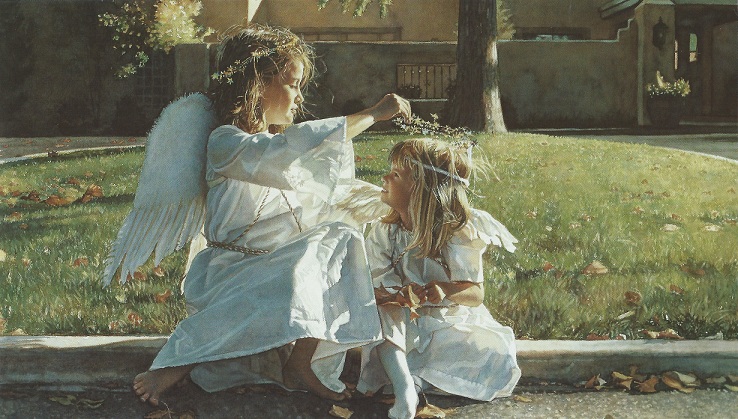 This image first caught my attention because one of the girls resembles the daughter of a close friend of mine. As I studied the image further, I became more and more bemused by the charming juxtaposition: the girls seem to be in their Sunday best yet are quite sensible in their wearing of boots. 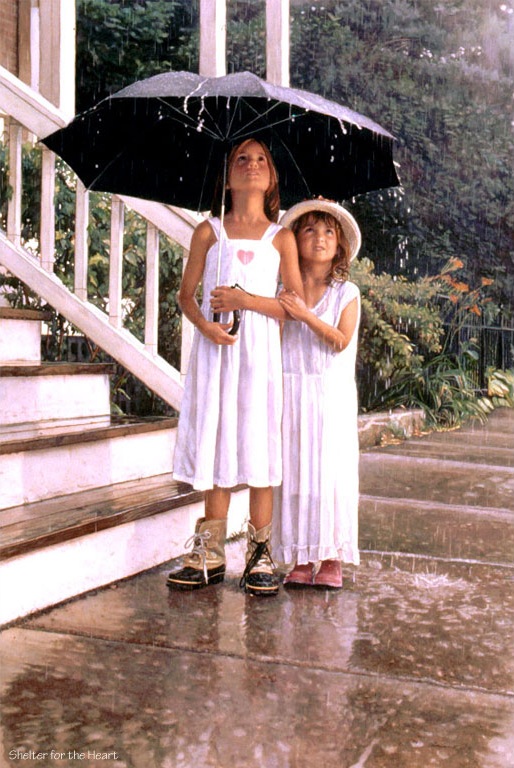 Quite a few images make use of dangling legs; they convey a relaxed quality and a sense of intimacy between the subjects. Hanks regards many of these pieces as homages to childhood and an optimism about their future. He hopes these touching scenes will inspire people to consider the kind of world we are leaving them. 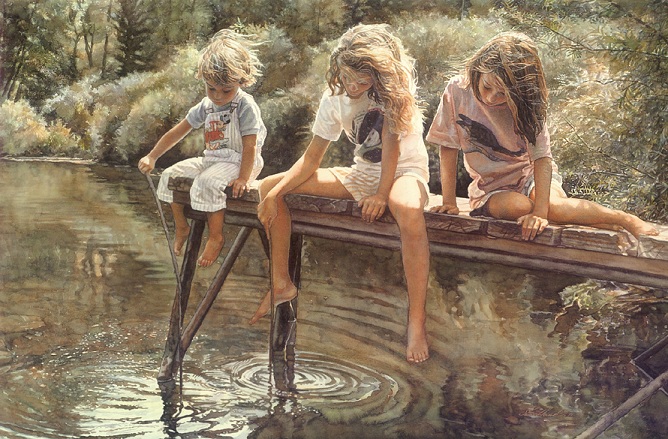 When Moving On was being produced, Steve Hanks was going through a divorce. Reexamining his work, the focus on women and children gave him the feeling of being cut out of family life. At that point, he began a series of works that involved fathers, and this one is my favorite. I couldn’t resist the warm charm of the relationship and the overt respect for producing art portrayed here. There are many images of children practicing musical instruments, and Hanks has actually been credited with inspiring the continued pursuits of some. 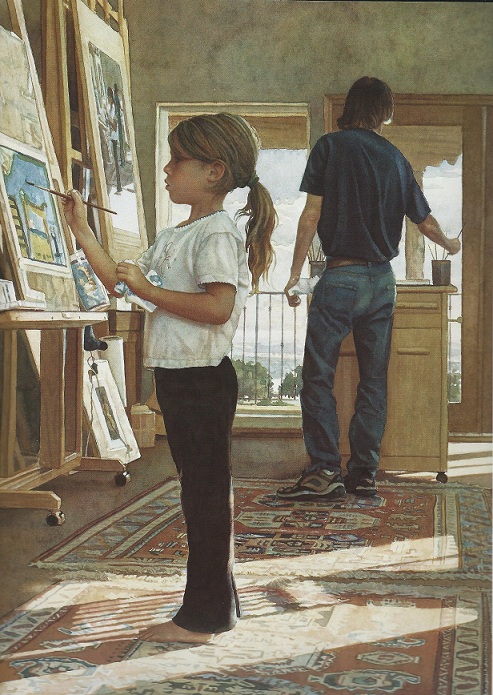 Babies and young children are reputedly difficult to work with and those artists who do so must find special fulfillment in their work. Hanks was working on a piece involving a number of babies sitting in a row. It must have taken considerable patience to get each one attractively rendered as convincing parts of an overall composition. After this experience, he decided to do an almost identical piece, this time showing them upset and in disarray, a scene that must have been etched in his memory by that point. This pair of works (All In A Row and All Gone Awry , 1993) became very popular, and so the artist gathered those same children when they were six years old to paint this piece. He also had the notion of bringing them together again in another ten years for another group portrait.  This he has done and a layout sketch is ready to begin production, but the demands of an active artist has not allowed him the time to complete it.  He says there is no hurry as he is doing this for his personal enjoyment and not the public anyway.  [It is not known if he ever completed this piece.]

At Pigtails in Paint our focus is on little girls, so it is sometimes necessary to inform readers of the full scope of an artist’s work. In Hanks’ case, he has painted a number of little boys, including his own son, family groups and his popular nudes of women. He is especially skilled at capturing women undergoing transitions in their life, and these works have served as a meditation on personal validation and healing for them.

You can watch an interview with Steve Hanks here and see his latest releases or visit his own website here.

3 thoughts on “The Mother of Invention: Steve Hanks”