When I was learning to distinguish between the styles of various naturist photographers, a friend of mine was paring down his collection and so I was able to acquire some things that rounded out my own. Included in his inventory were three prints. I knew they were not from any artist I was familiar with, but they were lovely images. One in particular portrays a rather idyllic and classical scene, as though we had come upon Artemis or Aphrodite in private contemplation. The flower further complements this feminine image, and she is frozen in a rather statuesque pose.

My friend did not know the name of the artist but told me where he bought the prints. Fortunately, the seller was still in business and told me they belonged to an artist named Peter Dominic and that they were part of a promotion to expose his customers to this artist’s work. At that point all the artists I knew about had books published so people could get an idea of their work, but this was not the case for Dominic. I wanted to see more and with a little luck and the kind efforts of some go-betweens, I was finally able to reach him and get a clearer idea of the scope of his work.

Dominic is quite personable but also a private man, which makes sense for someone who works with young nude subjects and is not interested in notoriety. He straddles a fine line between public recognition and attracting the wrong kind of attention from vindictive pundits. I always feel the art should speak for itself, and anyone making more than a perfunctory examination of Dominic’s photographs and has at least a modicum of artistic sensibility will recognize how exquisite it really is.

Dominic’s biggest inspiration was David Hamilton and that is evident in some of his work, but patent comparisons with well-known artists don’t paint much of a picture. I appreciate the long contribution of Hamilton and one of his books served as my introduction to the beauty of young girls, but when I increased my palette of artists and became familiar with a wider range of subjects and styles, I realized his work did not actually appeal to me. On the other hand, I can say without exaggeration that Dominic’s work is among my favorites, as he brings out the most in his subjects. It is tempting to glance at these images and write them off as just so much eye candy, but certain artists including Dominic have an empowering quality that is cathartic to the girls and young women who may be hypersensitive about their body image.

This revelation helped me recognize that true artists tend to come in two types. For example, Hamilton wants to see what he wants to see, and so his models are in almost complete service to him. This fact gives the viewer a feeling of being a voyeur accentuated by an intimate domestic or “behind the scenes” setting. Conversely, Dominic pays attention to the character of each of his models and that comes across as a kind of reverence. The girls are not hidden away in private settings but largely out in the open, grandly posed in the most beautiful natural backgrounds available to the artist. Both artists also may make use of soft focus, but Dominic is not using it for mere dreamy effect, but to bring out the natural radiance in the subject.

This particular model could be the poster child for this site, striking a balance between youthful beauty and innocent pursuits. With a talented artist it is easy to forget the effort needed to create the desired effect. All during this shoot Dominic was hoping the bubbles would cooperate and not make a mess of the scene. 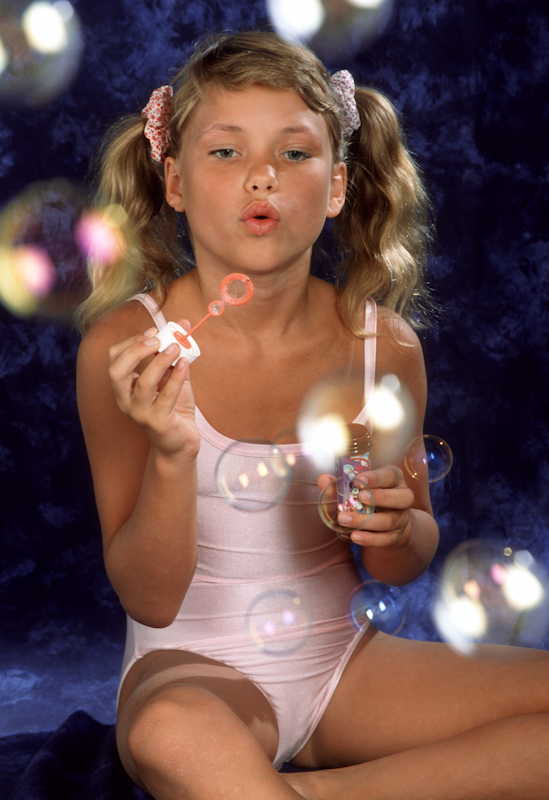 The glare in this bust brings out the girl’s golden hair and I personally like how the neat braid adds a contrasting geometric sharpness. 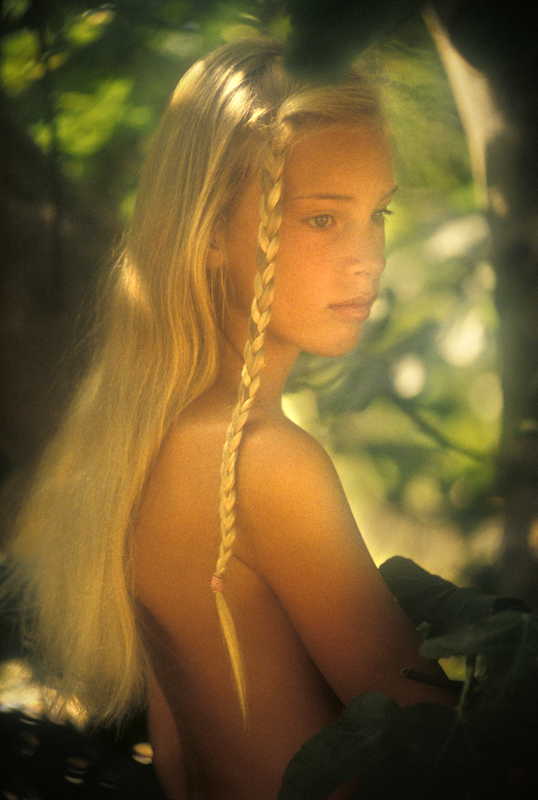 Dominic is skilled in a large range of techniques, and yet he never fails to flatter his models. In some photos the desire might be to bring out a girl’s soft sensuality but in this case, a crisp sweetness better suits this charming girl and her little companion. Animals are a challenge to work with and so I further commend Dominic for this skilled execution. 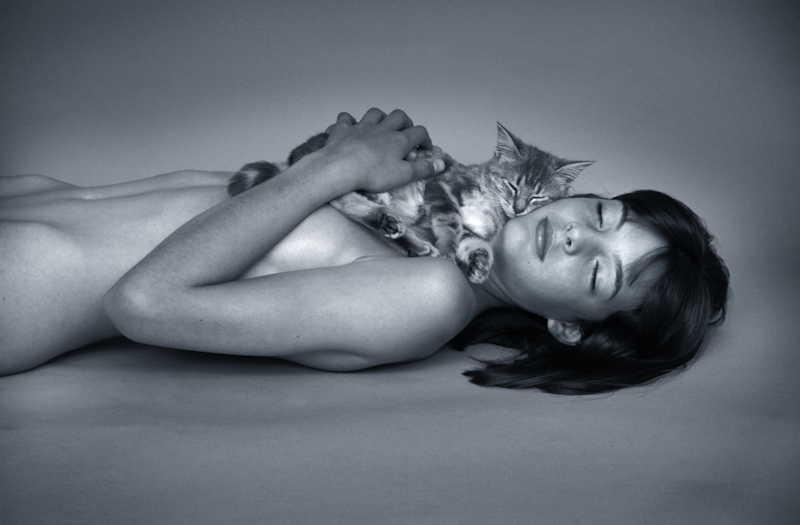 This shot emphasizes vitality. Notice how the model does not have a tan line; one might say she is comfortable in her skin and she sports an impish smile that communicates enjoyment. The bracelet and nails add a vivid contrast that pops out at the viewer, giving the image even more energy.

[It is with great pleasure that Pigtails in Paint reinstates this image.  Because we got a complaint from the Swedish authorities under whose jurisdiction our former host belonged, we had to remove it to remain operating.  As you can now see, it was much ado about nothing; the worst that could said is that the model was acting sassy.]

Although this post has focused on the younger girls, readers should know that Dominic shoots older models just as skillfully. An exhibition of some of his work can be seen at the ARGENTIC Gallery website.

[20200422] I was told that the French courts ordered many of Dominic’s images destroyed. I assumed that meant that no one can purchase prints any longer. I was recently informed that not all images were destroyed and some can still be purchased through a dealer. If you are interested, contact us using the contact page and you will be put in touch with the dealer. -Ron