With so many artists to cover, even living ones, it is all too easy to go through and rather perfunctorily present each one. With this artist, I did just that in the first incarnation of Pigtails but having plumbed more of the depths of this intriguing artist; I hope readers will discover a new appreciation for her sublime contribution.

Michal Chelbin (מיכל חלבין) was born in Israel in 1974 and took a serious interest in photography at age 15, attending a high school for the arts. This was an unusual choice as no one from her family had any skills or ambitions in the fine arts, yet she was immediately drawn to it. After high school, she served her two compulsory years of military service and was assigned as a photographer for the Israeli Defense Force. There she gained experience in field photography and discovered she had no passion for pure documentary work. After her service, Chelbin worked briefly as a news photographer before enrolling in a four-year photography program at the WIZO (Women’s International Zionist Organization) Academy of Design in Haifa, which she completed in 2001. She has relocated to Brooklyn, NY in 2006 and then back to Israel in 2010. Her work has been exhibited throughout the world especially in Israel, the U.S., Canada and throughout Europe.

“…I remember already then I wanted to direct my subjects and I didn’t settle for just shooting it documentary style or watching from the side. I wanted to create my own image. After the army, I worked briefly as a news photographer in Israel and hated every minute of it. I couldn’t photograph people in their grief, crying in hospitals or in court rooms…”

The artists who inspired Chelbin included both painters and photographers. She considers the great masters of painting like Rembrandt, Caravaggio, Vermeer and Velasquez to be amongst the first photographers because of their use of light and space and casting “ordinary” people as models. She also names Diane Arbus, Mary Allen Mark, August Sander and Julia Margaret Cameron as influences.

Technically, Chelbin’s work is relatively simple. She relies on natural light, uses standard film, relies on a single medium format camera and avoids digital post-processing. She carefully stages her photographs but remains open to serendipity. Like Cameron and Sally Mann before her, she appreciates happy accidents that occur on the set and enjoys taking photographs of something that interests her without thinking too much about it. Her subjects sometimes make suggestions which she incorporates into the photo and she is fully aware that girls usually like the attention of the camera.

Sometimes when working on a photograph Chelbin either has an image in her head which she deliberately creates or may get an idea from a subject, a location or just on the set. Everything is carefully staged and she simply combines the elements that interest her. “Because I shoot portraits I can say that people are my first inspiration. They are intriguing, mysterious and unsolved and therefore casting is very important to me.” Often the star of a photograph would be a relative, friend or neighbor of the person she had originally come to shoot. She says she searches for people who have a legendary quality about them—a mix between odd and ordinary. She makes the most of the right subject and usually photographs each person more than once, even returning months or years later.

Chelbin tries to start a project with a group of people who have some narrative in common, but really these groups only serve as a starting point from which to explore. As a result of her artistic wanderings, her work appears to inhabit the gray area between fiction and reality. One distinguishing feature shared by all these various groups is the use of costumes. When engaged in whatever activity that has drawn Chelbin’s attention—the dancing, the circus act—her subjects are almost always dressed for the stage. Her first major project revolved around large, traditional circuses in Israel and Europe, but in 2003 she spent six years seeking out and photographing performers in small circuses and traveling troupes, primarily in the Ukraine, Russia and Israel.

Chelbin is cognizant of the fact that the adolescent girls she photographs are on the verge of sexual consciousness and torn between innocence and experience—their gaze into the camera reflecting that ambiguity and complexity. She tries to create an informal scene in which they can directly confront the viewer. This effect is further enhanced by the use of visual contrasts: juxtaposing young and old, large and small, normal and abnormal, fantasy and reality. For her, the image is just the tip of the iceberg and a gateway to a story waiting to be told.

Chelbin‘s studies at WIZO gave her the skills to pursue her own personal projects. She started by photographing many people immigrating to Israel from the former Soviet Union. She found their faces intriguing and felt they expressed a dark, northern, fairy-tale quality from a region very different from Israel. One Russian girl in particular named Vitalina captured her interest. Chelbin was intrigued by the maturity exuding from within the girl’s youthful features, the seductiveness within her innocence. The artist photographed her under loose direction, alone on a bed of hay or wading in a pond with friends. It is unfortunate that Chelbin has not received the kind of recognition for “Vitalina and Friends” as she did for later projects. To me, these fourteen images express a fresh spontaneity generated between an inspired artist and her model.  A point of interest: the girl in this image is not actually Vitalina, but a girl named Aviva.  Four of the images that can be found on the internet are of her and she came forward to identify herself. 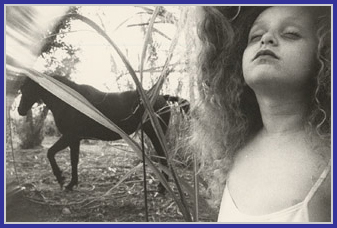 Chelbin conceived a more visually extravagant series while in school, shot in a palette of rust and blood, using models arranged in highly staged scenarios drawn from Renaissance and Baroque-era painting. Modeled from religiously-inspired images, the twenty-two images of “The Chapels” are an intriguing mesh of flesh and transcendence. 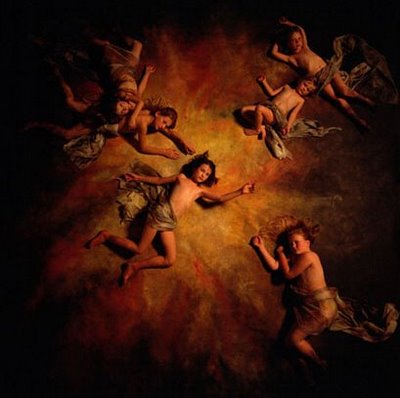 Chelbin’s first series to receive widespread recognition is probably “Strangely Familiar” and resulted in her first monograph: Strangely Familiar: Acrobats, Athletes and Other Traveling Troupes, published by Aperture in 2008. Chelbin speaks eloquently of her vision for this series:

“I try to photograph my subjects dislocated from their performing environment and set in casual settings, off stage: at home, on the street or in a park. Some of them with their costumes and others wear everyday clothes. I try to create a seemingly private moment, one where they are not performing or on stage…My images are vehicles to address universal themes: family issues, ideas of normality, puberty with its all incumbent pains and distractions, the desire for fame.” 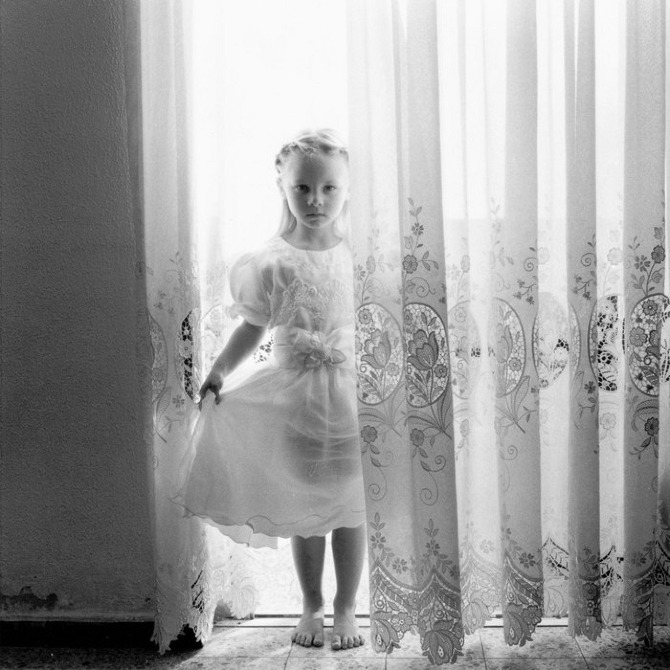 Her process is very time-intensive; Chelbin spends weeks getting to know her subjects and their families, earning their trust. Part of the reason has to do with the suspicion of outsiders which is a common trait among such traveling troupes. That trust was especially important considering many of her subjects were children. There is a strangeness to child performers; in order to perform well, they need to have an adult discipline and focus. Many of Chelbin’s subjects perform acts that require extreme technical skills and intense physicality, acts that punish the body. It’s not uncommon to see their small bodies dotted with bruises and scrapes. Most children routinely pick up scrapes and bruises, but during normal childhood play, not through practicing a profession. In addition, some are beaten in the course of their training. Suffice it to say, their lives are tough. 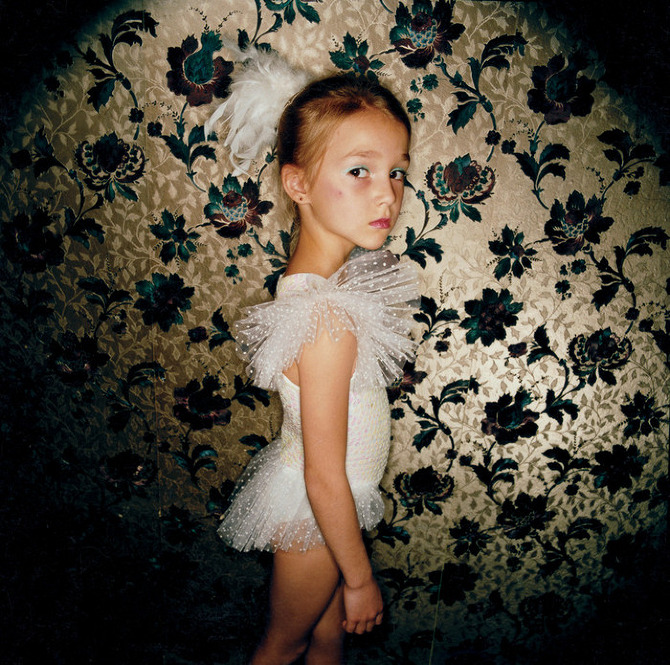 Although Chelbin photographs adult performers as well as children, it’s always the portraits of children that draw the most attention. With discipline comes maturity and that contrast with the young faces is compelling to artist and viewer alike. Since her subjects are taught to smile during their performance, she directs them not to smile. Since they generally perform on stage, she photographs them in casual, non-performance settings. Then after removing the subjects from all context of the stage, she often has them pose in their performance costumes. 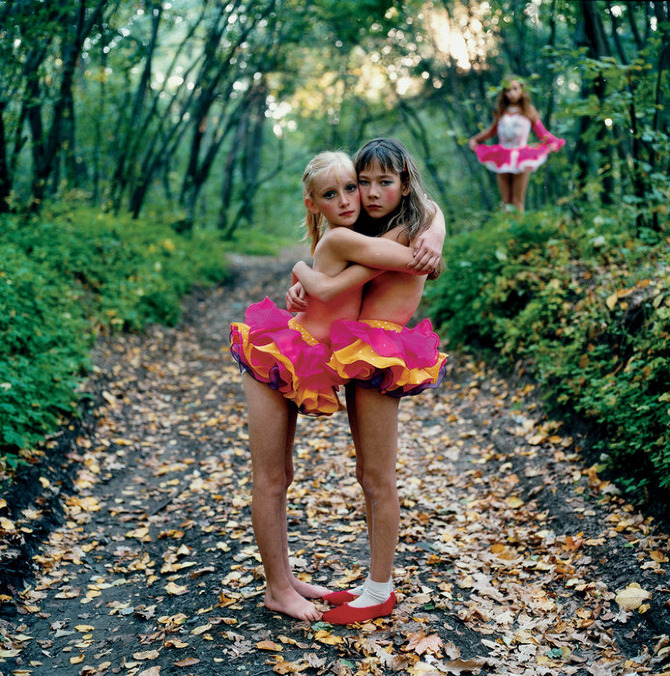 Editor’s Note: I rather like the black & white version of the image above, which is slightly different, so I have added it to the article.  – Pip 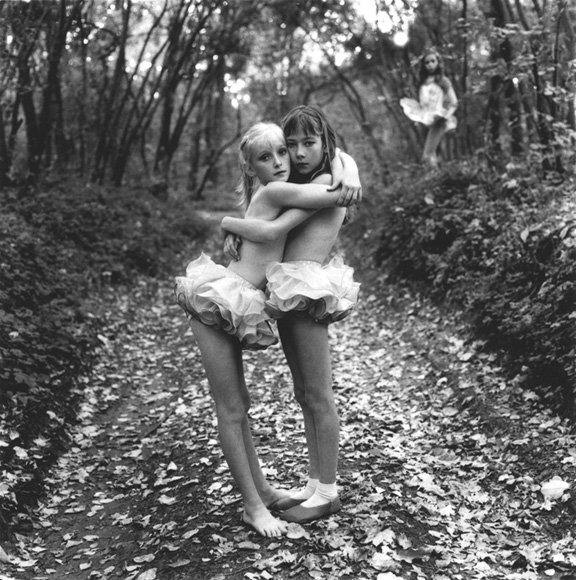 According to Chelbin, many of the children who appear in her work come from broken families or were living in orphanages before joining a traveling troupe. Audiences tend to ascribe glamor and excitement to the lives of performers. The circus spurs further associations of escape, freedom and enchantment. Despite the colorful costumes and the allure of circus life, it’s clear the lives lived by these children are less than glamorous. Sometimes the viewer can get a hint of this reality as in this image of this grandfather making an effort to compose himself. 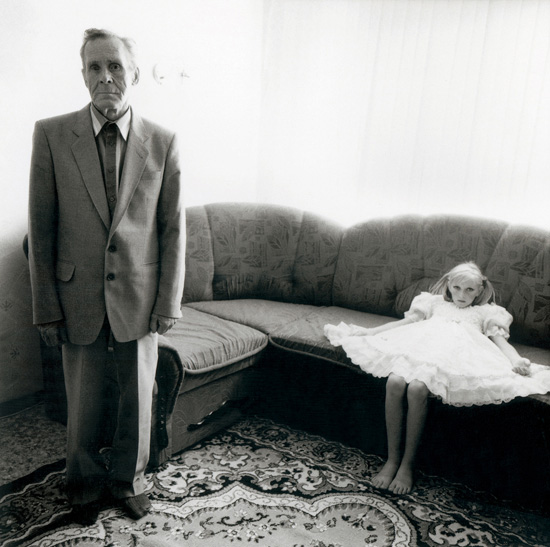 The youngest subject in Chelbin’s photographs is petite enough to stand upright on the palm of a man’s hand. The artist largely gravitates toward the chronological extremes of age. It is not her intent to do social documentary work, as all images are staged much like those of Shelby Lee Adams, but nevertheless some truth of the lives of these people does show through. 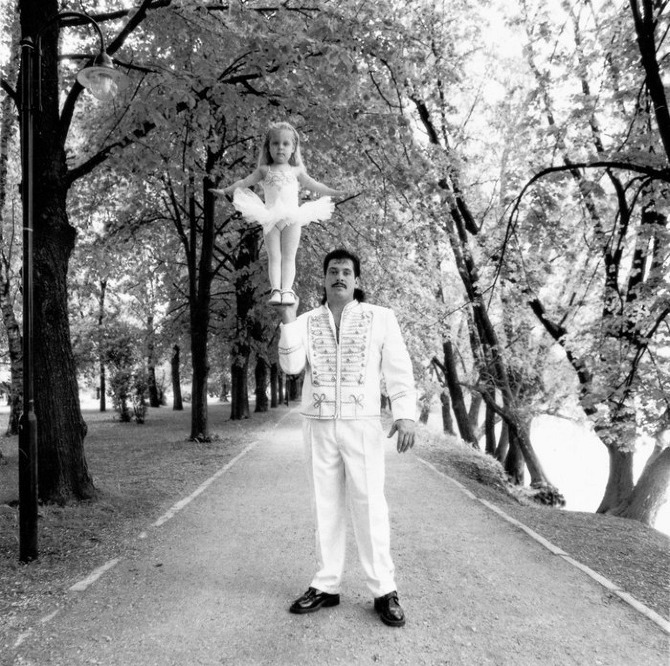 After “Strangely Familiar” her work explored the world of exhausted wrestlers. The result: another monograph called The Black Eye, this time by Twin Palms Publishers in 2010. Her latest series, “Sailboats and Swans”, features stark portraits of inmates housed in Russian and Ukrainian prisons, also by Twin Palms Publishers in the Fall of 2012. The fanciful title refers to the murals the photographer found scattered throughout the jails, which often took the form of pastoral scenes on wallpaper. The odd decor stood out as just one of the many contradictory aspects of a prisoner’s life and naturally the artist exploited this unusual element in her work. Chelbin ventured to Ukraine and Russia—the birthplaces of her ancestors—and gained rare access to both male and female inmates.

Although she is a serious photographer, Chelbin gets little attention for her whimsical nature. Who knows how many projects exist only in her mind? In one interview she mentioned one such idea; it involves portraits of people who wear funny old glasses. However she says that every time she sees an interesting pair, she is too embarrassed to approach the person, and so it gets logged in a kind of mental picture gallery. There it will remain unless she can screw up the courage or produce these portraits with brush and canvas.

6 thoughts on “Between Performances: Michal Chelbin”