They say a man is punished for the way he treated girls in his youth when he has a daughter or daughters of his own. That may seem superficially like a just irony, but we all know life is not fair and our female progeny can just as easily be a blessing.

Robert Crumb was born in 1943 and is a compulsive sketch artist and was a key figure in a kind of underground comix movement in the late 1960s and 70s. One would not expect to see a post about this man here on a blog about little girls, but odd things catch my attention and I like discussing things from an unusual perspective. Even a perfunctory look at his sketches over the years reveals a kind of fetishistic objectification of women, but ironically, not completely misogynistic. It would be fair to say that Crumb both adored and hated women and this attitude was further exacerbated by the fact that girls did not show an interest in him until he became famous. It seemed inevitable that Crumb would recognize that women objectify men just as much, but in different ways. Since we know girls inevitably become women, it seems natural that little girls would get some of the flak. Here are a couple of examples from his sketchbooks. 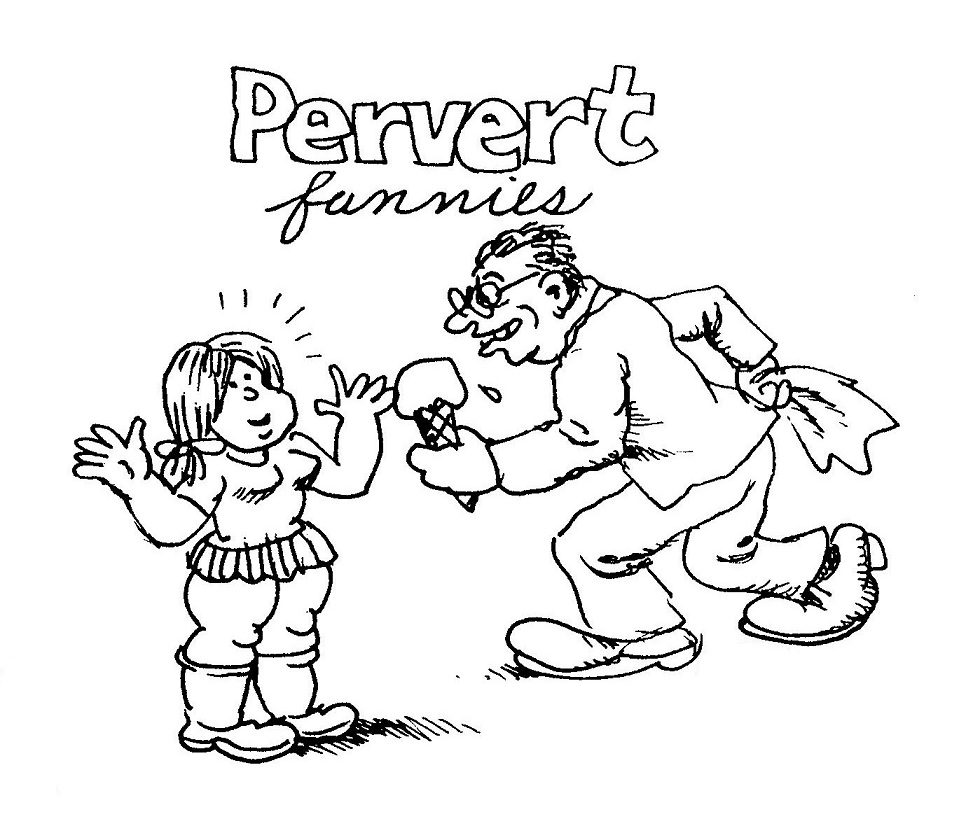 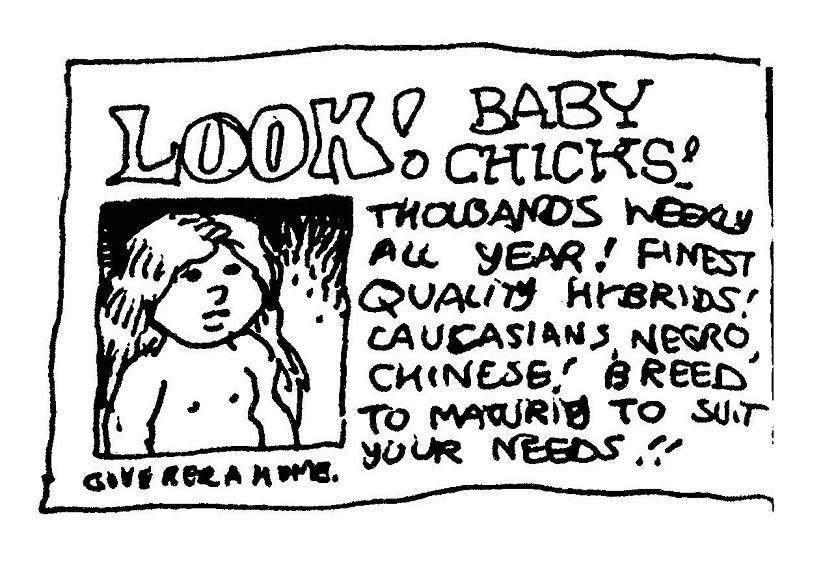 These and many others were only published because, although Crumb hates the commercialization of his work, he sold many of his sketchbooks to raise money for his family’s move to France. Before departing, Crumb gave permission for Terry Zwigoff, a close friend, to film him and his family for a documentary. Given his tortured and sensitive character, this was a rare opportunity to meet the real Crumb. If it hadn’t been for one of his closest friends being a filmmaker, we would never have gotten this kind of intimate portrait. Crumb was released in 1994 to critical acclaim and was a major factor in launching Zwigoff’s career.

When I was first invited to participate in this blog, I began to think of all the little girl imagery I knew and how it all might fit in someday. There are a number of little girls in interesting portrayals in cinema, but because I was fond of documentaries, I thought of all those that happened to be captured on film. I could not resist the exquisite irony of examining the juxtaposition of Crumb’s attitude expressed through his art and his relationship with his own daughter Sophie. There are many revelations about Crumb: his sexual proclivities and his portrayals of women that seem to come from the darkest depths of his psyche. The thing that struck me most was his admission that he had never really been in love—overpowering lust yes—but not love. Then came the quote:

“The only woman I’ve ever been in love with is Sophie basically, my darling daughter.” 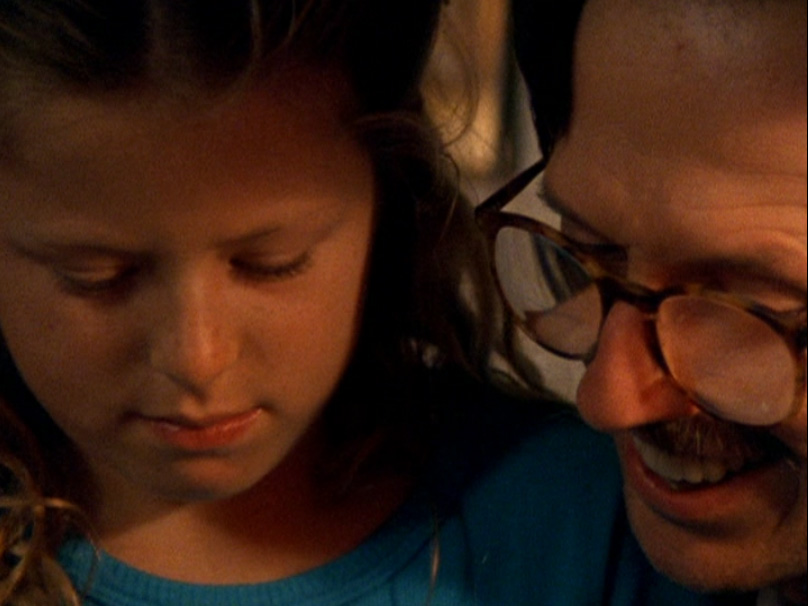 Not to oversimplify, but it is human nature to love one’s children regardless, but Crumb also has a son Jesse by a first marriage, and even though it is fair to say that they are close, there is not that feeling of warm intimacy one might expect. However, after Sophie was born something changed and he knew it. The simple fact is that little girls, distinct from children in general, have a certain charm that can sometimes achieve incredible effects. This charm is part of what this blog is all about and I felt inspired in this instance to take a more psychological approach. Here is a shot of Sophie’s work when she was little. 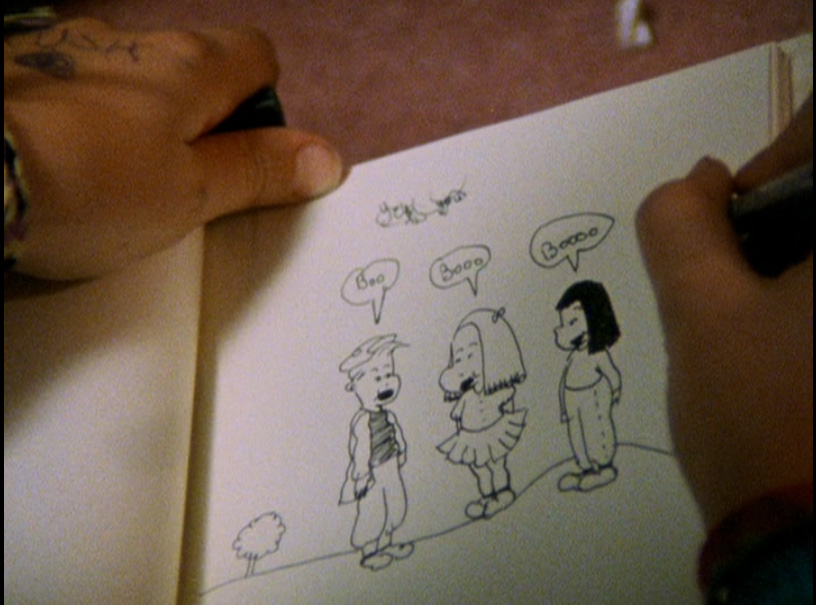 I don’t know if any of this early material survives, but when researching Sophie, I discovered she was an active member of the family’s comics enterprises. Recently she established her own blog and the latest revelation is that she is now a mother herself. There didn’t seem to be a way to contact her, so I couldn’t ask if she still had those early sketches. You can examine her latest work here.

Those closest to Robert Crumb all seem to be artists and I did not want to open that can of worms on a short post, so I will summarize here and you can investigate on your own if you like. Charles Crumb, Robert’s older brother, committed suicide a year after the filming of Crumb, but he was talented and someone may have preserved some of his work. There is also Maxon, his younger brother, Aline Kominsky, his second wife and mother of Sophie and Jesse Crumb, his son.

I do recommend viewing Crumb, because even though his peculiarities may not be the same as ours, they are the little things that make us human, and the desire to fit in with society should not be pursued to the exclusion of an authentic life. This film also has an insightful commentary by Terry Zwigoff and Roger Ebert, the film critic. Ebert commented on how people tend to criticize the person with a particular fetish or irresistible impulse for their affliction, if it is fair to call it that. It is easy for thoughtless people to adopt the mainstream prejudice and just write off someone as a pervert and not examine his or her work. It is also customary to ignore those aspects of a respected figure that make one uncomfortable; should you continue to monitor this site, you will make many interesting discoveries.