Let’s do some photography today, shall we?  I don’t know the title of this photo, if it even has one, but it was taken by Marvin Newman.  The scene is of adults washing children and readying them for bed at a kibbutz.  I scanned this from one of the books in a Time-Life series called Human Behavior.  I found several of the books at a yard sale years ago and picked them up for a dollar a piece, if I remember correctly.  It’s an old series with some outdated information, but it was certainly worth a buck a piece just for the photographs alone. 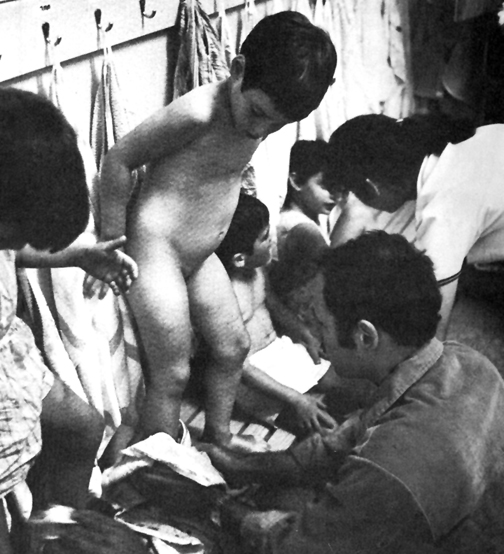 From Ron on July 26, 2012
I know this point has been made in many other places, but isn’t it funny how nudity is acceptable when it is in the name of anthropology? The insidious implication being that such people are a lower form of human and are not entitled to the same respect and dignity as “civilized” people.

From pipstarr72 on July 26, 2012
Yeah, and this is how Victorian photographers frequently got around the censors–they focused their cameras on indigenous peoples and cultures that recalled the classical era, classical art being very popular in their time.