Although he is hardly known outside of the art community, Frederick Cayley Robinson—another of my favorite Golden Age illustrators and painters—was well recognized for his talent in his own time and was a member of many of the prominent and highly respected British art clubs and organizations of the day.  His pieces are often warm, inviting domestic or pastoral scenes populated with characters you’d love to get to know; his work deserves to be better known. 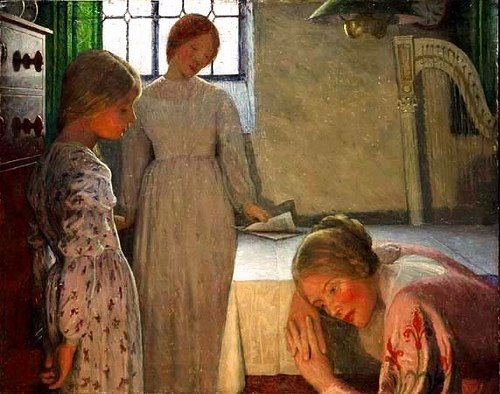 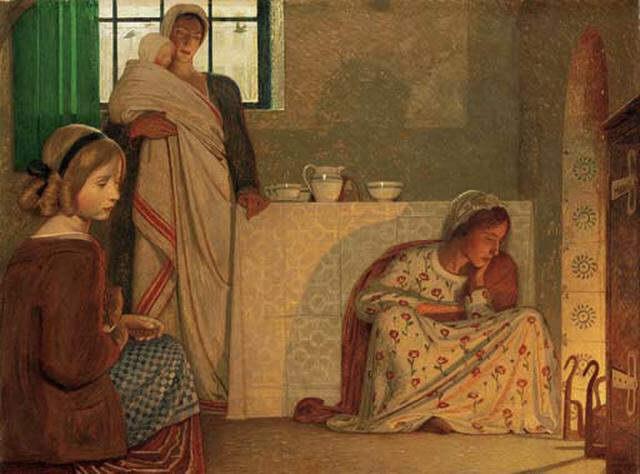 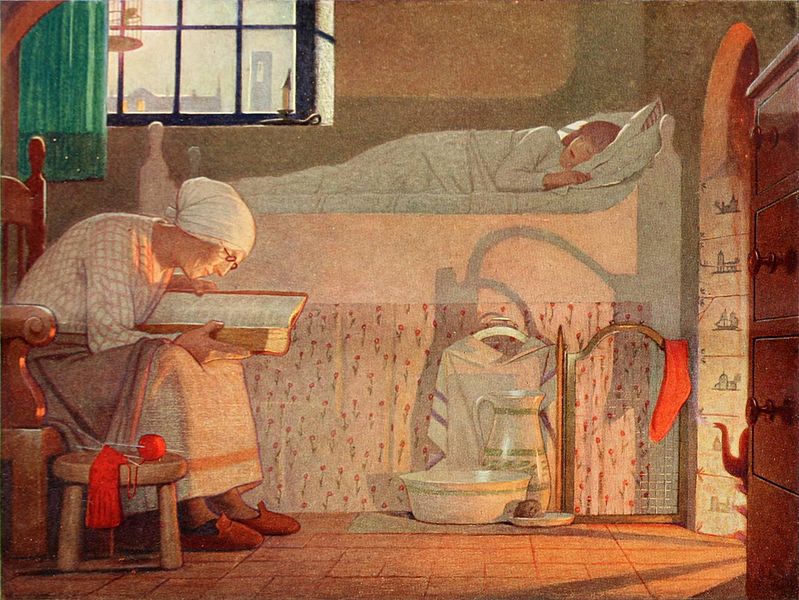 This is interesting.  Although the original sketch (which appeared in The Studio, Britain’s equivalent to Germany’s Jugend) depicts the little girl in the foreground as nude, in the final painting she is clothed.  The question is, was the nude merely an anatomical study on which he had always planned to put clothing, or did he intend the girl to be nude in the painting but later changed his mind?  I’m inclined to think it’s the latter, though not for the reason you might think (prudishness); as is evident from later illustrations, Robinson was not averse to portraying nude children.  As an illustrator myself, what strikes me immediately about the figure of the nude girl is that her musculature seems a bit thick and masculine for a little girl, especially in the context of the time period, when little girls were often depicted as feminine and dainty as possible.  Robinson’s girls aren’t over the top in that regard, but they were certainly no exception to the rule.  In fact, I don’t think Robinson used a nude model at all; I think he used a clothed model and rendered her nude, but Robinson, who had a sharp eye and a perfectionist nature, was unhappy with the girl’s body as drawn and decided to keep her clothed.  Something else I find interesting about this drawing is the way he gridded it out, which is something I also tend to do for my larger pieces. 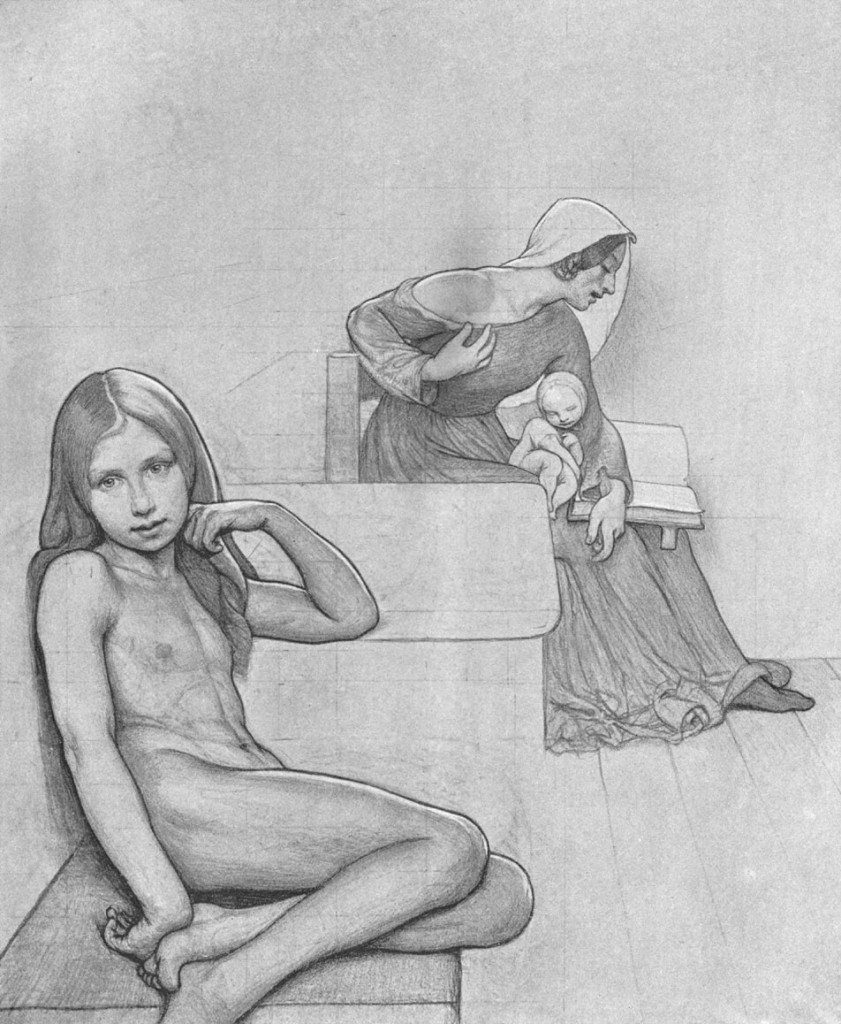 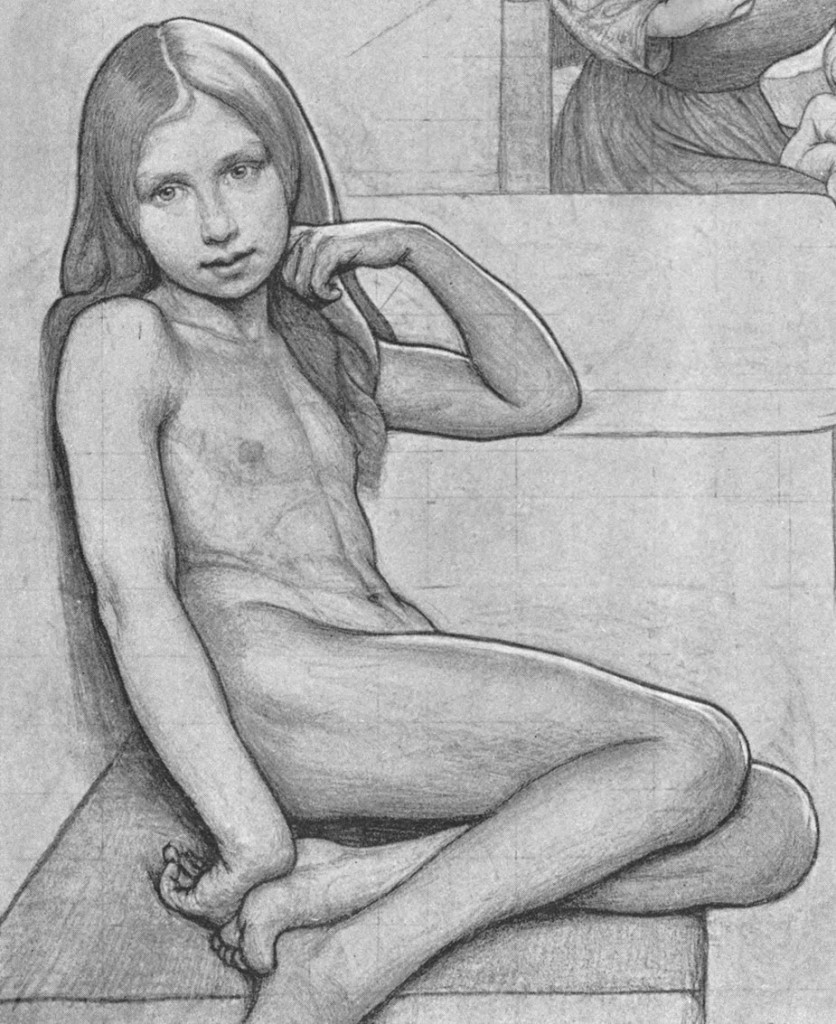 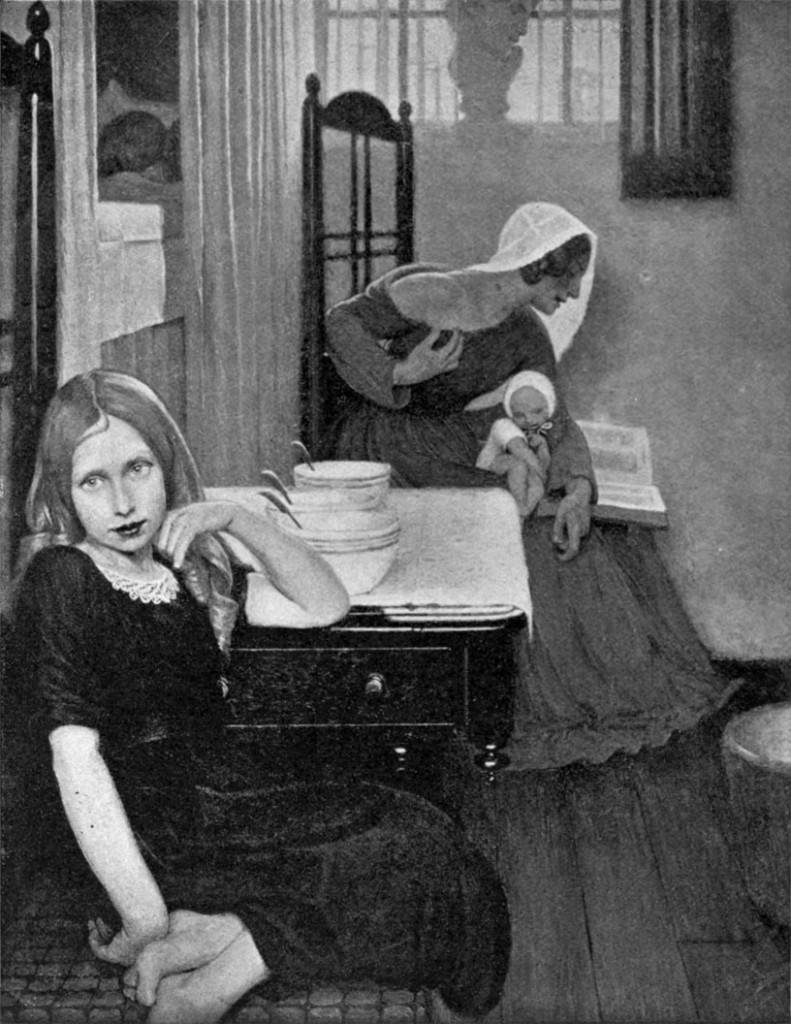 This is a different work with the same title. Robinson reused his titles frequently. Sometimes his like-titled scenes are quite similar; he apparently liked to rework themes over and over, another trait I have in common with him. 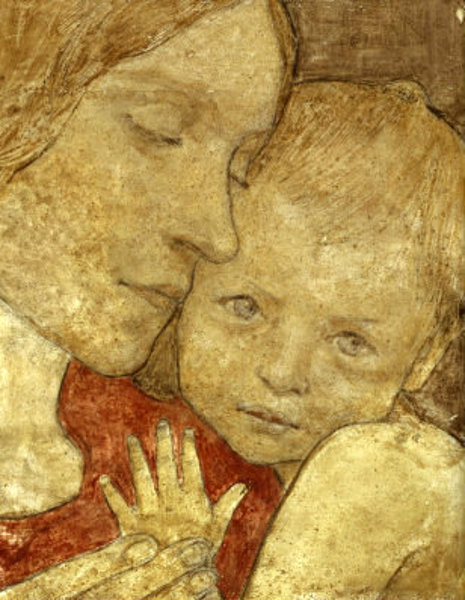 My absolute favorite works by Robinson are the illustrations he did for the print copies of Maurice Maeterlinck’s play The Blue Bird.  It’s a strange fantasial play that has been turned into several films (two in the silent film era alone), a radio play and even a television show, the most famous (or infamous) of the movies being the 1940 Shirley Temple version, which has a fascinating story attached to it.  The film was dark for a Temple vehicle and rated poorly with audiences and critics.  Like its competitor The Wizard of Oz, which Shirley had lost the lead role in due to studio conflicts, the filming of The Blue Bird was fraught with disaster from the beginning.  But unlike its competitor, The Blue Bird bit the bullet at the box office, the first of Ms. Temple’s films to do so.

At any rate, the play is interesting in itself and can be read in its entirety here.  But it is these illustrations which have so captured me. 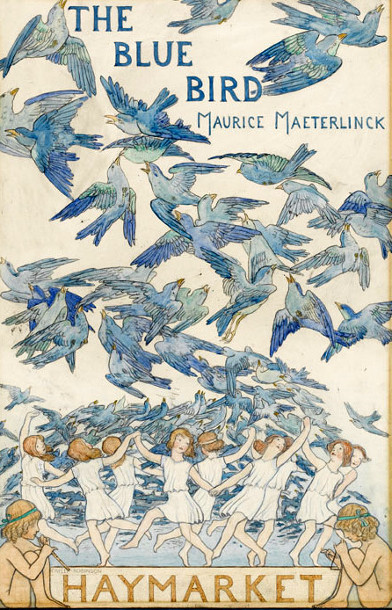 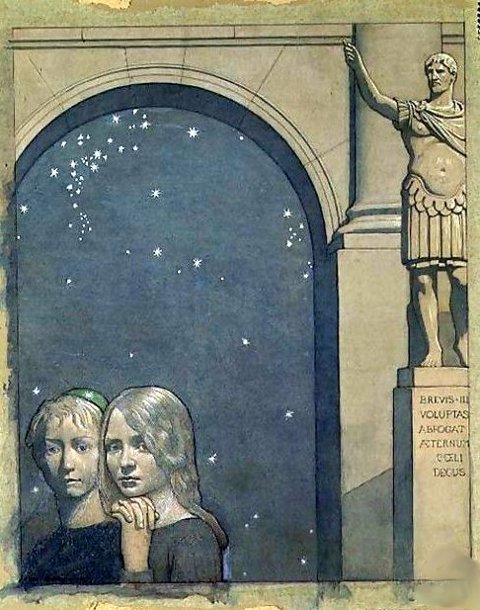 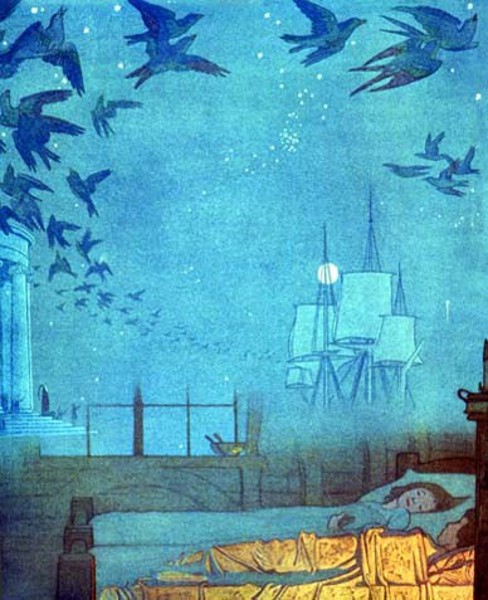 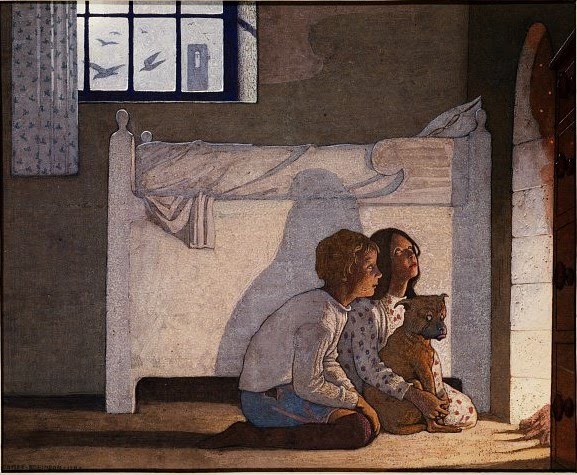 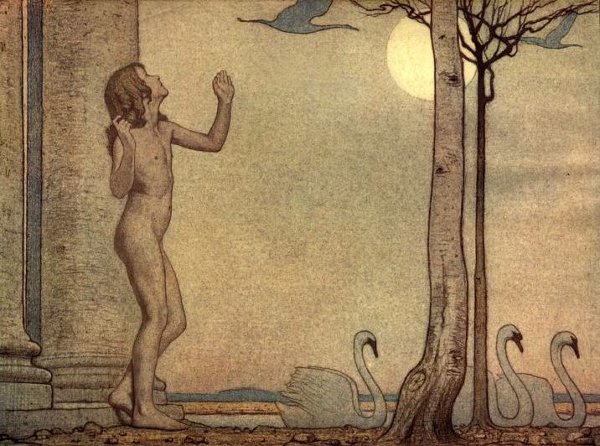 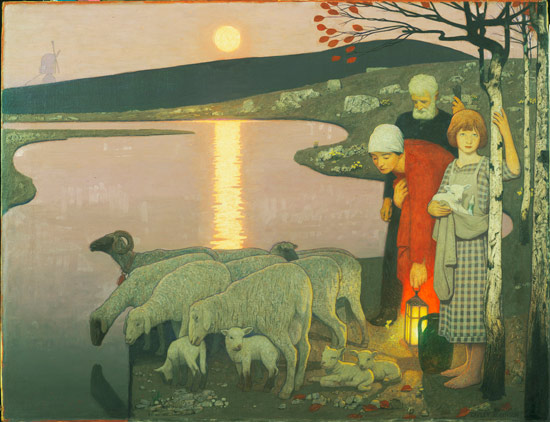 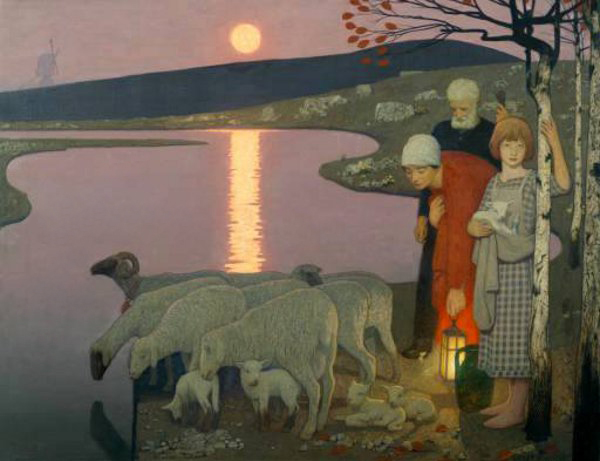 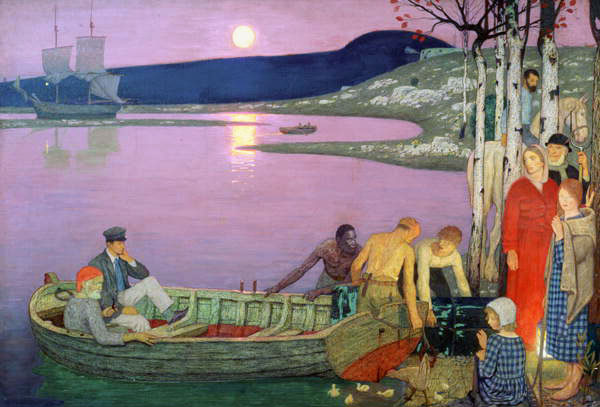 Frederick Cayley Robinson – The Call of the Sea

I believe the nude study of the girl in the foreground was not a girl at all. The definition of the musculature (the pectorals, abdomen and thighs) indicate a male pattern. In fact, it is entirely possible that the model was a classical style statue and the musculature minimized to make it more feminine. The standing nude girl in ‘The Blue Bird’ art is more convincing. This reminds me of the work of O.G. Rejlander, who used photography to demonstrate that certain images were anatomically impossible or had to have been a male model converted into a female as he could find none with a particular physique. It is even possible that an artist has used an adult male and “softened” the features to make it seem more childlike. These are tempting shortcuts for artists as children are notoriously difficult to work with as the typical photographer or filmmaker will attest (children, animals, water). The advent of photography actually gave a wider range of artists access to real child nudes and those skilled with children could publish studies for use by artists.

That’s exactly what I think. The musculature and heaviness of the figure suggests he used either an older male model or based his sketch on a classical study of some sort (early Renaissance artists often gave kids unrealistic musculature–they were like miniature versions of the adults they drew). He realized the form was too masculine and opted to cover her body with clothing. Did you notice that the lips of the painted version of the girl were much darker too? They’re almost too dark, in fact, as if she’s wearing lipstick, which makes me think he was overcompensating for the masculinity he perceived in the sketch of the little girl. Despite the masculinity of the figure, I still like the drawing. It isn’t impossible for a young girl to have that form and definition, just highly unusual.

You guys are thinking like art scholars, and that is cool. But I’ve been to the swimming hole recently, and prepubescent girls have can have amazingly muscular-looking bodies. If there isn’t the size context of a nearby adult, their hips are narrow, butts are small, making their shoulders look broad. Lack of breasts accentuate abdominal muscles. Yes, there is the skinny little ones, and the lingering baby-fat ones, but many of them would be studies in the human muscular system to rival a post adolescent male. I love this drawing!
PS the darkness of the lips in the “painting” makes me think that her lips were just red (as well as her dress). Assuming that this wasn’t an etching or lithograph originally, a traditional stat camera (that would change an color image to black & white for publishing back in the day, before digital scanners) had a tendency to represent reds as very dark, and have trouble picking up blues. I’d love to see the color version of that painting.
Keep it up…this artist was very satisfying for me…right era, right moods, right subject.

Well, I think I did say that it was within the realm of possibility for the girl to have this body type; if I didn’t say it, I was thinking it.  But there are certain things about her body that make me think he was using a classical adult male image as a model, only with musculature subdued. I can’t put my finger on them exactly, but as an illustrator myself I just have an intuition about it. I think he tried an experiment and didn’t quite like the results so wound up covering the girl and playing up her femininity. But that is, of course, my opinion and there is no way to prove it at this time. Perhaps in the future I might get hold of a book on Robinson that resolves the mystery.

Sure. And it’s fair and fun to speculate. In my imagination, he was just accentuating the details in the drawing that he would need to render more subtly in paint later. And I’m not guessing whether his original intent was to add clothes or not, but I wish he hadn’t.
Do we ever get to see any of your illustrations?

Oddly enough I have been considering posting some of my work here, but I want to post my best work and not everything I draw is pertinent to this blog. I may select a couple pieces of mine to post in the next couple weeks. Stay tuned.