Elves and fairies are frequently depicted in art as children or child-like beings, even if they are engaged in adult activities like romance. The illustration’s title translates as Elf Love, if you were wondering.

Franz Kupka, a Czech artist, is better known as František Kupka. He eventually gave up realism for abstract painting. 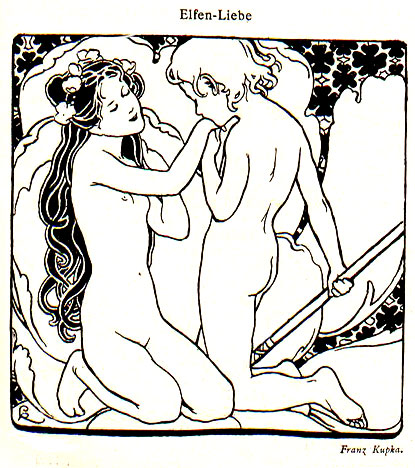 From Ron on July 3, 2012
Graham Ovenden produced an excellent book called ‘Nymphets & Fairies’ which contains drawings of children as fairies. With respect to adult situations, it is interesting when children are cast as some kind of little people that are supposed to be venerable elves or whatever. This was done in ‘The Santa Clause’ and there is one interesting scene where the little girl/elf tells the new Santa that she is: “Seeing someone in gift wrapping.”

From pipstarr72 on July 3, 2012
Yeah, it was pretty common historically to depict these beings as children, and it is still occasionally done, although now they are stripped of their adult context, or else any references to “adult” behavior is done for comical effect, as in the film you mention.