In many ways the nude feminine youth is the very symbol of the style called art nouveau or, more aptly, jugendstil, which literally means ‘youth style’. Nouveau is itself the French word for ‘novel’, something new, different and implicitly modern. What that something was was an idea. Jugendstil eschewed the staid and formal traditions of art represented by the cultural Old Guard.  It ditched the notion that art was something merely for the higher classes to enjoy. Art nouveau flip-flopped the standards of the time by both embracing “mere” decoration as art and by creating art for the masses rather than for the wealthy alone.  And it was steeped in social and political undertones aimed squarely at the Average Joe.  The beginning of the 20th century was revolutionary for poor and lower middle class working families throughout the West, although the revolutions manifested in different ways.  We could get into these but they are pretty far off-topic.  Suffice it to say, the nature of Western culture underwent tumultuous changes at this time, including in its art.  One could say that, as the poor were the least empowered class, so was the girl child the low man on the familial totem pole, and the identification and empowerment of the former could be effectively symbolized through the cultural identification and empowerment of the latter.

It’s also important to recognize that the history of Western art is in part the history of humanity itself, and the recognition of the import of its components. Classical art is primarily about the adult male, and not coincidentally, so was the time period. Women had few rights, children virtually none. As we move into the late Medieval and Renaissance eras we see women becoming more prominent as artistic subjects, and simultaneously the first inklings of women’s rights surface in politics and law. During the late Renaissance and Baroque eras young boys—mostly embodied, and symbolically empowered, in the form of cherubs, putti and amors—blossom in art, and we also get Rousseau’s On Education, a treatise on the natural child which, of course, focuses on the fictional boy Emile, setting aside a much smaller (and decidedly sexist) portion of the treatise for Emile’s fictional female counterpart Sophie at the end of the book, nearly an afterthought. It is not until the late Victorian and the Edwardian eras that girls become enshrined and recognized as legitimate both in art and in life. At last we as a society begin to really care about the fate of young girls, to the point where the publication of the first portion of W.T. Stead’s overblown muckraking piece on child prostitution A Maiden Tribute to Modern Babylon (more on that at another time) almost instigates a full-fledged riot and does nearly single-handedly result in the raising of England’s age of consent from 13 to 16.

And after this moral panic peaks and subsides, we finally begin to get a somewhat clear-eyed picture of the young girl, and to see her as both a symbol of the new humanity and as a well-rounded human being in her own right.  It is here–or rather slightly before–where jugendstil enters the picture.  While a lot of nonsense is still floating around about women and children at this time, there is a definite awakening to the charms and spiritual power of the girl, particularly the girl who stands on the cusp of womanhood.  There’s something seemingly magical and profound, at once organic and metaphysical, about the transition of the smallest and meekest of humans into the mysterious, devilish femme fatales and the majestic holy virgins being portrayed by the Symbolists, and it is this element which is best captured by the jugendstil artists.

This is the essence of art nouveau, the holistic adolescent girl, and it is no accident that she crops up so often in these magazines.  So here they are in their element: stripped of clothing and therefore of false notes and artificial cues . . .

Note how this first girl is cheerfully thumbing her nose at the grumpy old man in the  judge’s wig.  Symbolism, boys and girls!  Symbolism! 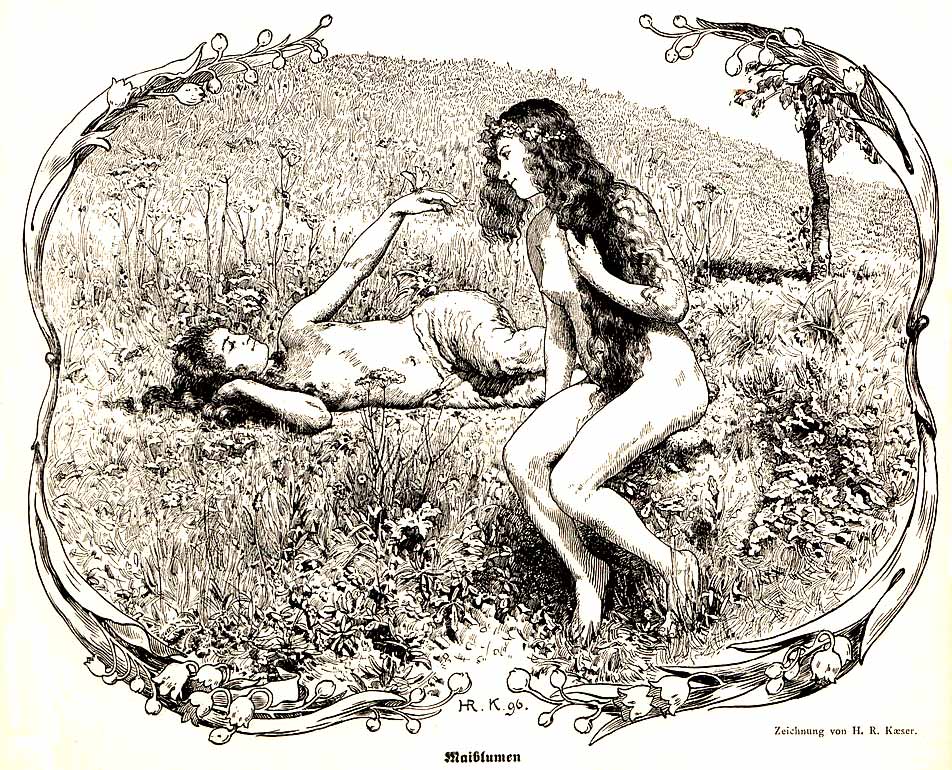 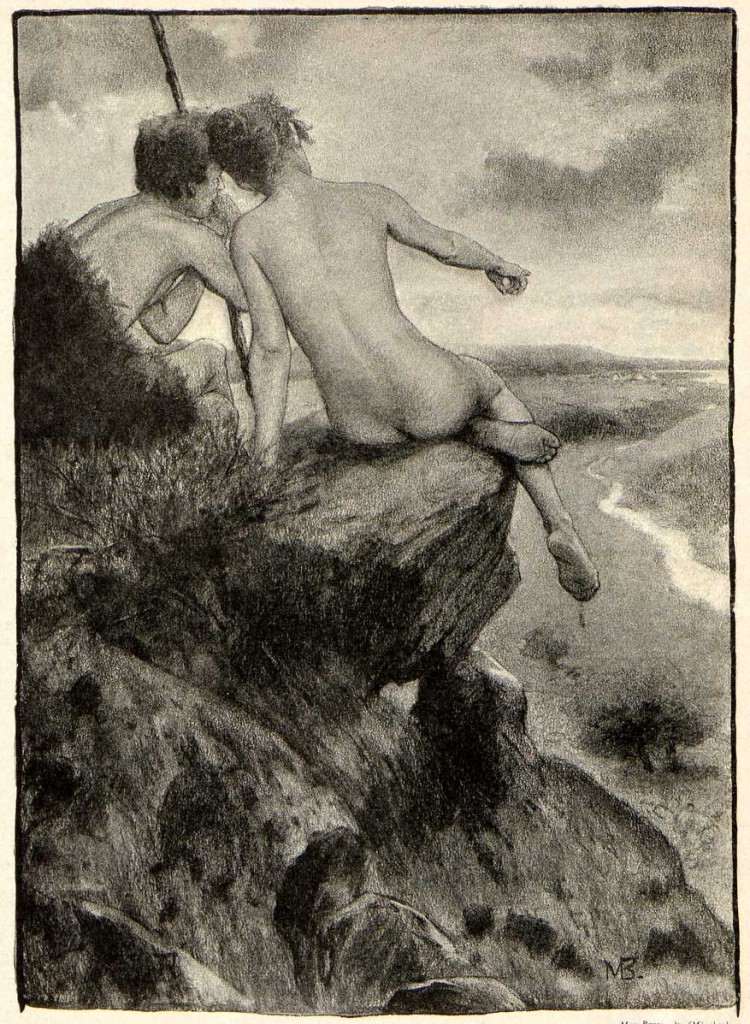 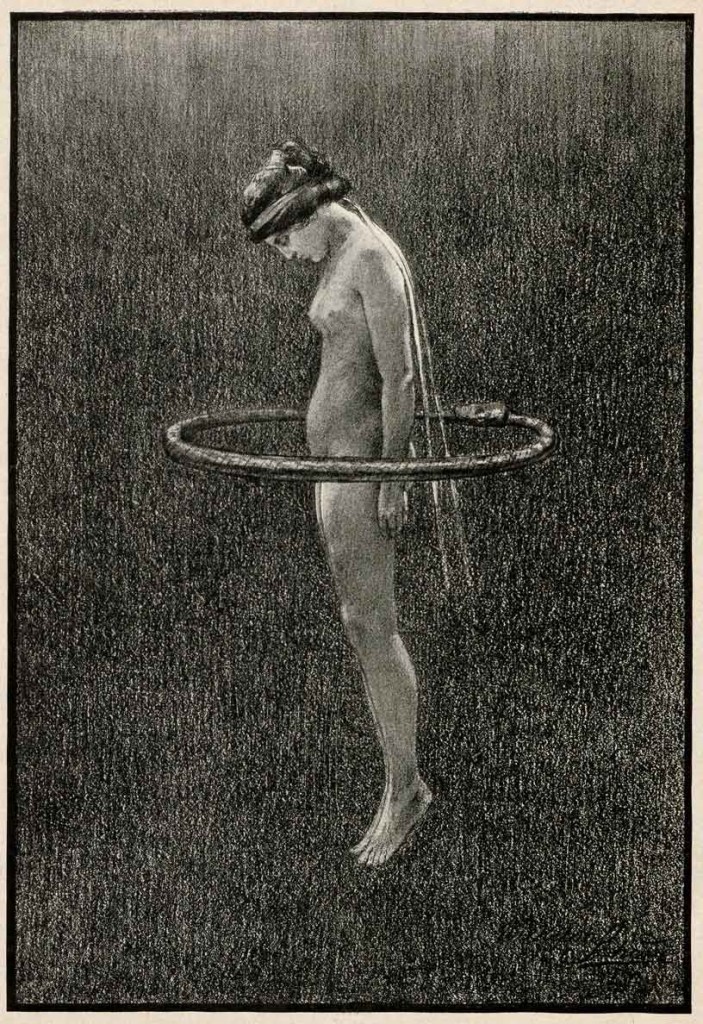 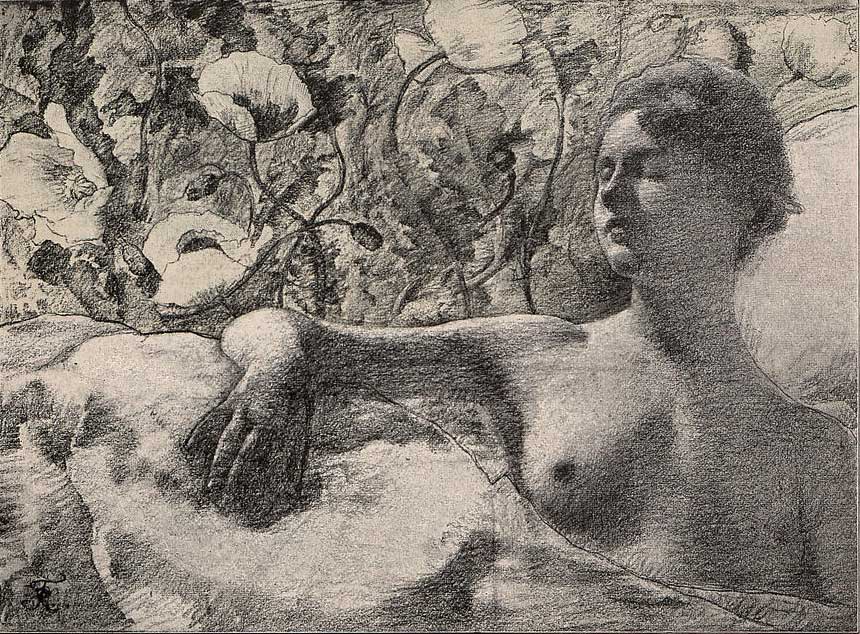 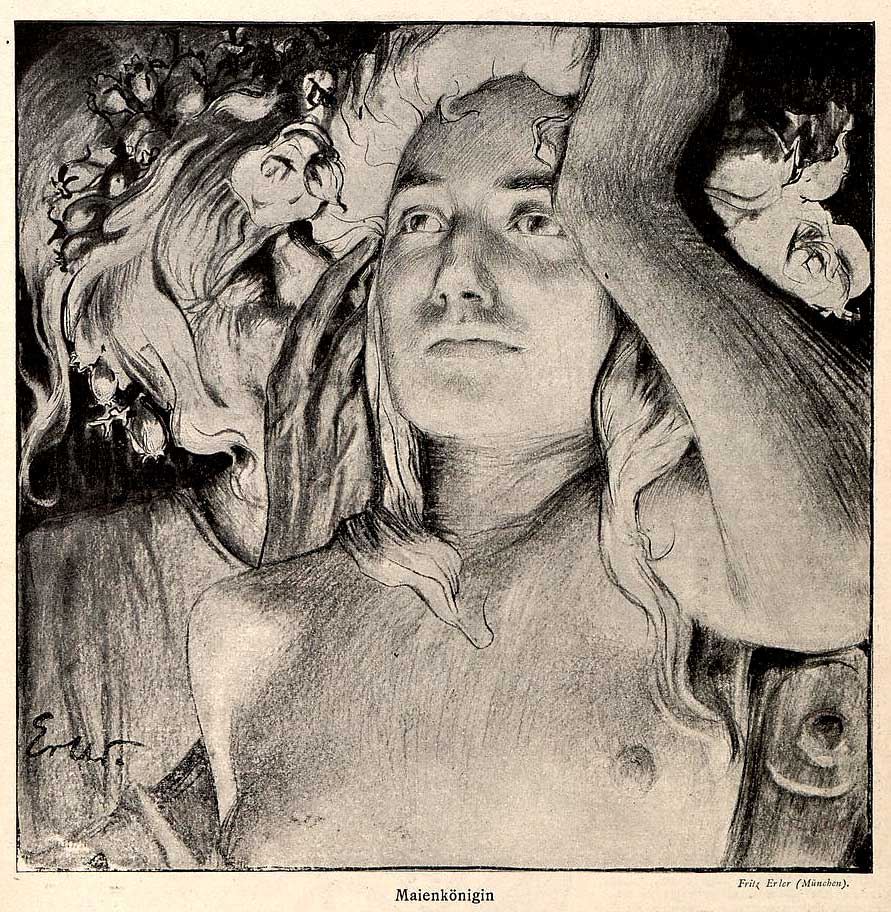 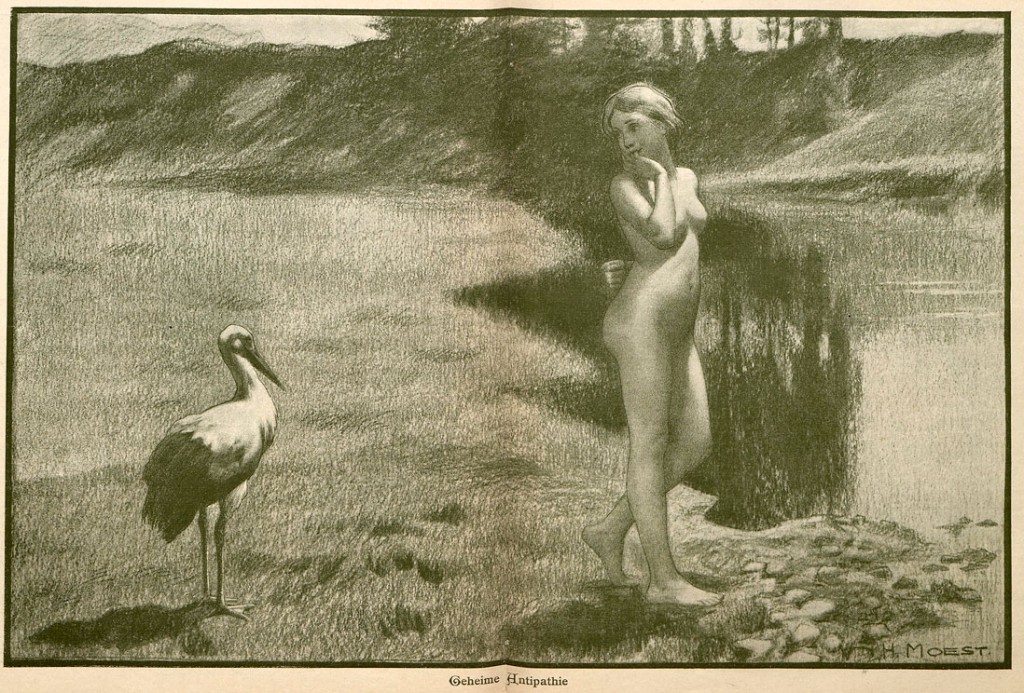 And here’s the juvenile Cupid and Psyche making an appearance: 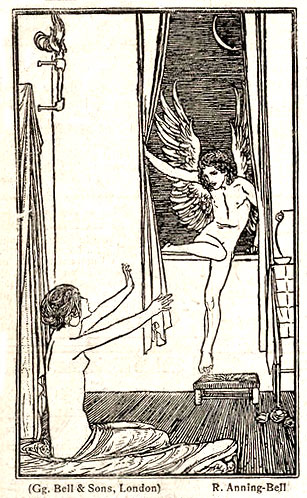 Another symbolic confrontation between old and new: 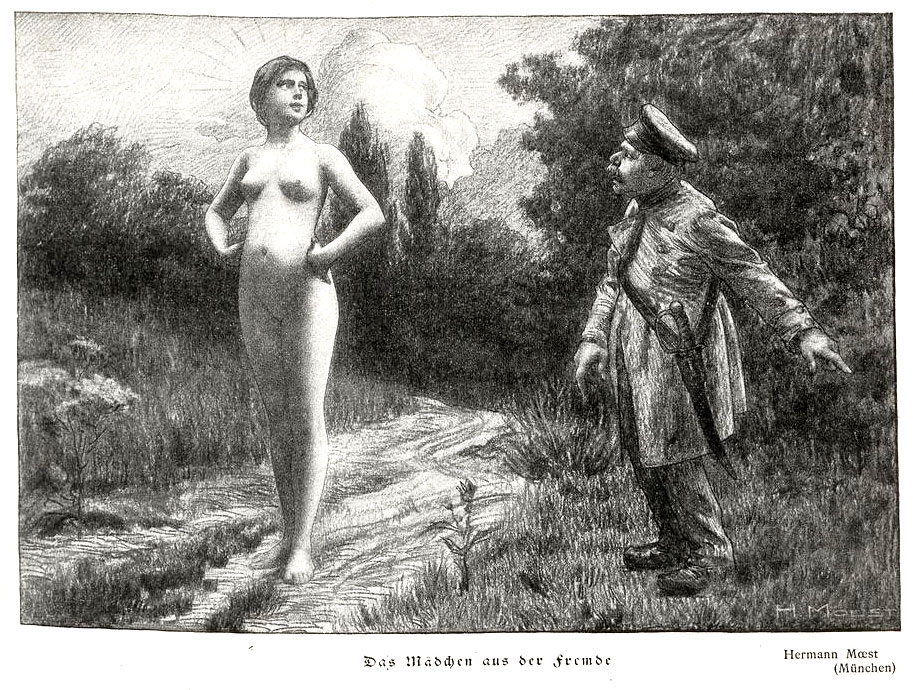 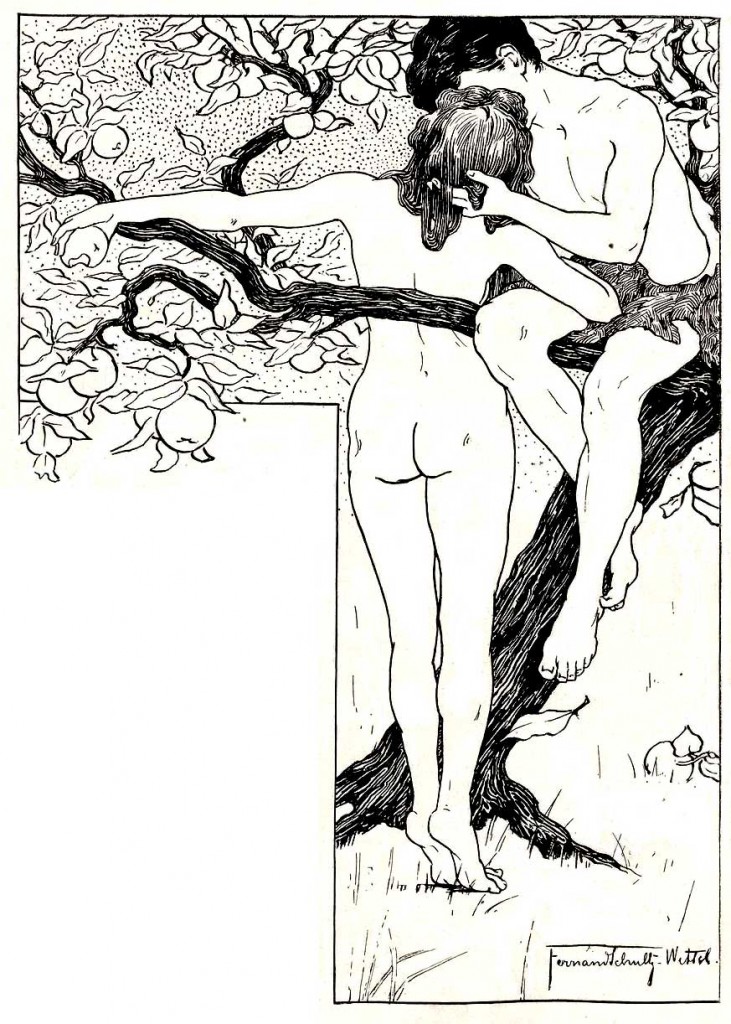 Ephraim Moses Lilien was a Jewish artist who occasionally featured in the early issues of Jugend and even received an award from the magazine for his technically proficient photography. Later the magazine became increasingly anti-Semitic and generally racist (but in fairness they were far from the only German publication of the era that did) but it truly was on the cutting edge of culture and politics in the early years. 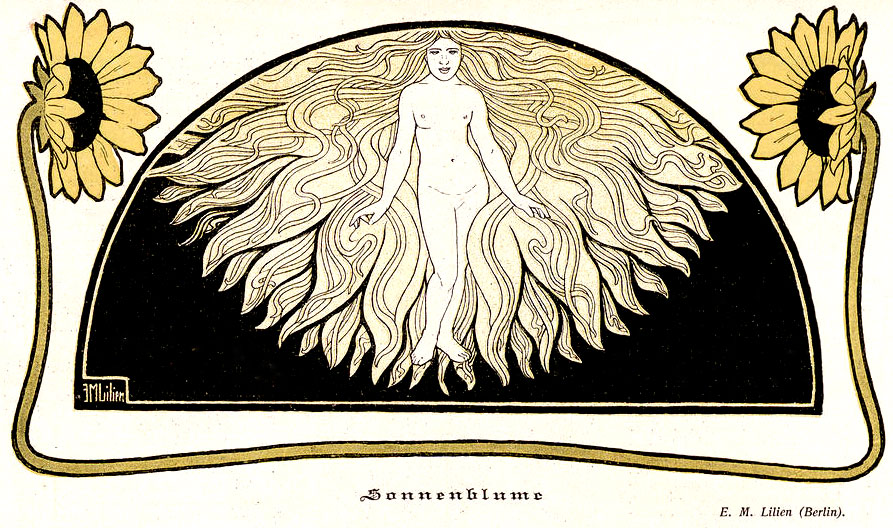 This last artist, Ernst Ewerbeck, would go on to become a noted Expressionist. 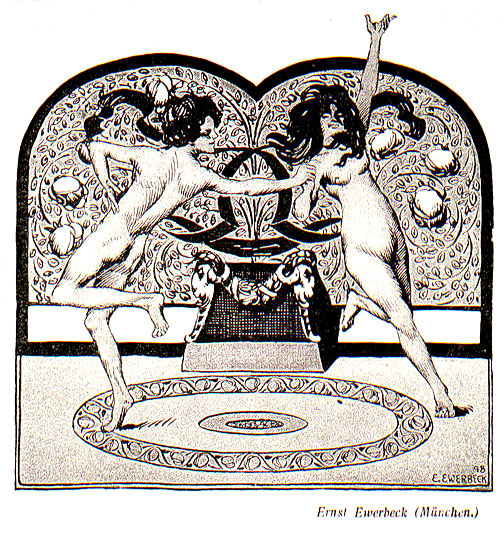 From Dr Ram Nath dubey on July 14, 2012
what a similarity between Indian art and this one