One thing I like about Jugendstil and Art Nouveau illustration is that female putti (putti being traditionally either male or genderless) appear quite regularly, even if they are meant to serve a humorous purpose, as is the case with the drawing below. For a variety of reasons Jugendstil was about femininity, and it can be argued (as I intend to do in a large upcoming post) that the female youth—particularly the nude or classically dressed female youth—is the very symbol of this artistic movement, although generally the focus was on the adolescent girl rather than the prepubescent girl.

The artist here is Arpad Schmidhammer, an illustrator of Bohemian birth known mostly as a cartoonist and children’s book illustrator. 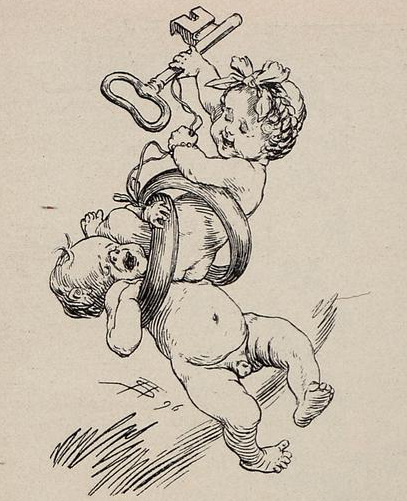 From Hugh Z. on June 18, 2012
Ouch. It looks like the male putti is in serious pain – He’s being crushed and choked between a wedding ring and the female putti. Even worse- She seems to be enjoying this a little too much..
I would say this is a warning against being married…

From pipstarr72 on June 18, 2012
Yeah, I believe that was the gist of it, though clearly meant in a humorous vein. Still, men of the late 1800s and early 1900s could be quite schizophrenic with regard to females, so who knows?