We lost one of our earliest and most important American science fiction and fantasy writers a couple days ago when Ray Bradbury passed away.  I devoured Bradbury’s short story collections when I was in high school.  A few months ago, while researching the art of illustrator Al Parker, I encountered an illustration he’d done for Bradbury’s story The Veldt which I first read in one of those collections, The Illustrated Man.  Because the story (and the illustration) features a little girl, it is appropriate for this blog.  Initially I set it aside for a future post on Al Parker, but I decided this would be a better time to post it.

Bradbury was a man of immense heart and imagination, who wrote several now classic stories and novels, including the anti-censorship masterpiece Fahrenheit 451.  Battling censorship is of course an issue very dear to me.  R.I.P. Ray Bradbury—you will certainly be missed.

And here’s a nice little summary of the story (that hints at the ending, in case you want to read it).

Addendum: If you’d like to see something really cool that’s based on The Veldt, check out this sweet animated music video for Deadmau5’s song of the same name featuring vocals by Chris James. 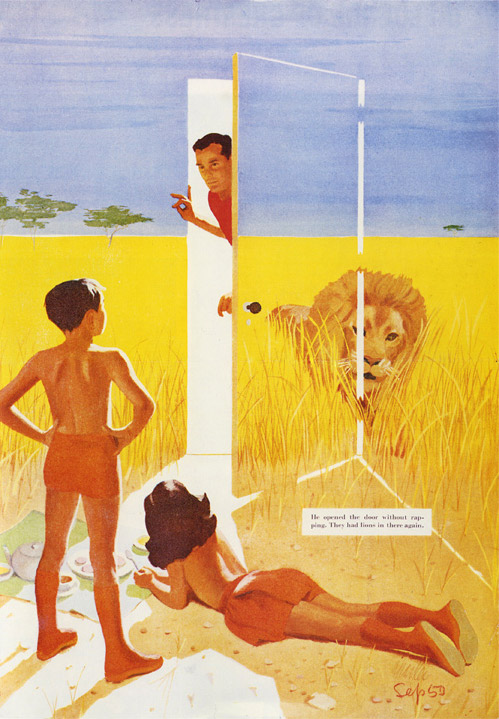 From Margaret Matchin on June 27, 2012
Hello, I would love to find the book with the Al Parker illustration in it. Can you tell me which one it is? there are a couple on E Bay, and I am trying to figure which one it might be…..thank you . Peggy

From pipstarr72 on June 27, 2012
Hi, Peggy. The illustration originally accompanied a printing of Bradbury’s story (under the title The World the Children Made) in the September 23rd, 1950 issue of the Saturday Evening Post. The story itself can be found easily today in the Bradbury anthology The Illustrated Man. As far as where the illustration might have been reprinted, I simply do not know. I encountered it on the internet and have not seen it elsewhere. It may be in a book of Al Parker’s work or it may not be. Sorry I could not be of more help.