I can’t tell you how much I adore this artist’s work.  Gallen-Kallela was a Finnish Symbolist who focused mostly on illustrating the legends and fairy tales of his home country, and in that respect he was a bit of a nationalist.  But one should be careful slinging around that word, because it is all too easy to confuse the native pride of Gallen-Kallela’s stripe with the kind of nationalist fervor that put the Nazi party in power in Germany.  That was certainly not what he was about.  Anyway, these early mythological paintings tended to be lighter, softer and more romantic, but when his not-yet-school-age daughter Impi Marjatta died from diptheria, his work became darker, more aggressive, more contemplative and sorrowful.  Some of his pieces were tightly and technically rendered, putting one in the mind of illustrators like Dean Cornwell, and others are more Impressionistic, like the Odilon Redon-esque “The Girls of Tapiola”.  Whatever mode he’s in, his work resonates with power and vigor. 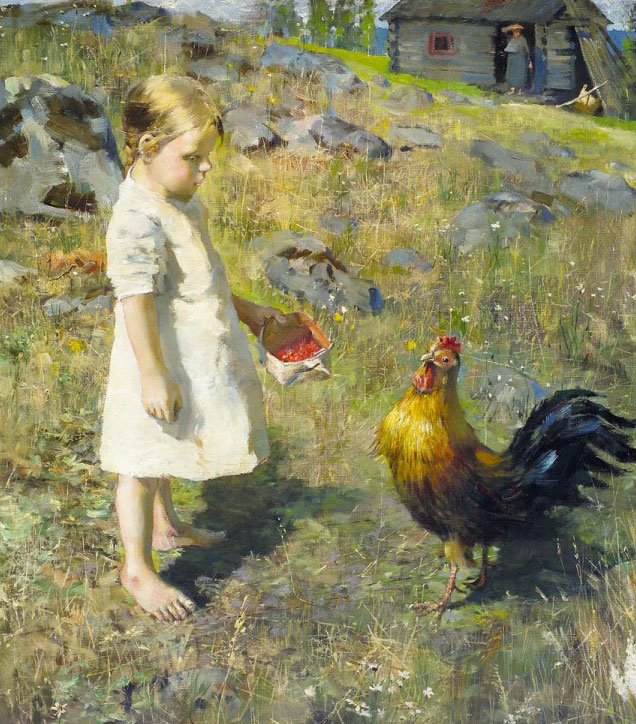 Akseli Gallen-Kallela – The Girl and the Rooster (1886) 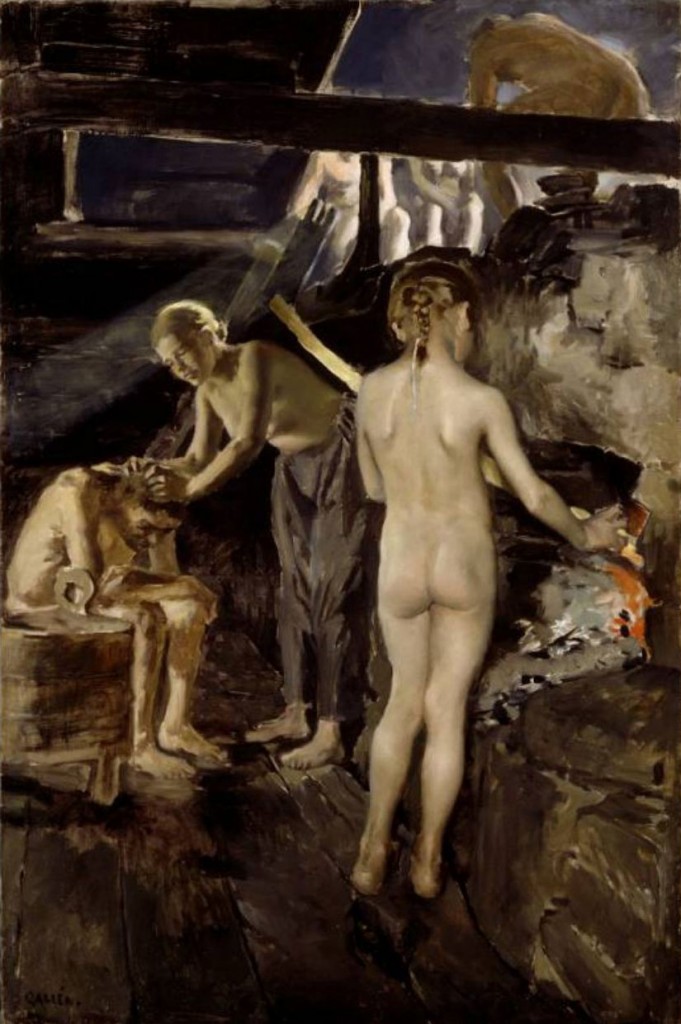 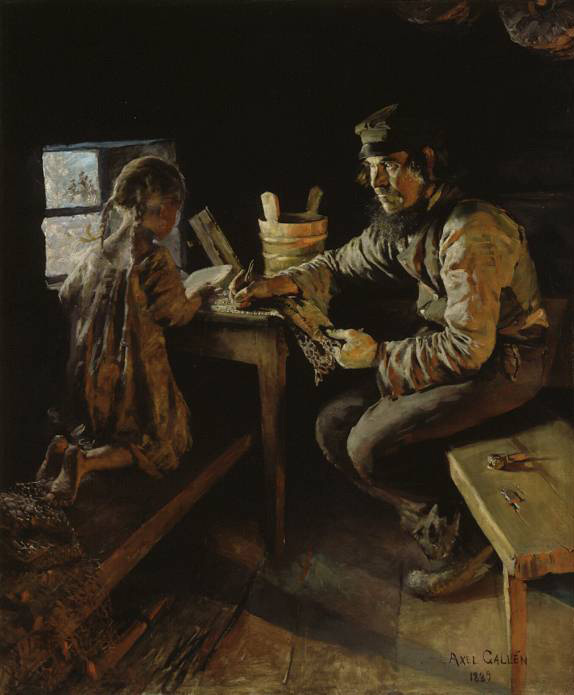 This next work is stunning.  It depicts the fairy tale of a young girl named Aino, from the Finnish epic Kalevala written by Elias Lönnrot.  In the story, an old sorcerer and fisherman named Väinämöinen (who, by the way, may have influenced Tolkien’s creation Gandalf) is challenged by the youth Joukahainen to a contest of lyrical song.  But the pompous boy taunts the old man, pushing him too far, and Väinämöinen magically invokes the earth to swallow the youth up to his neck.  In order to free himself, the frightened boy promises that his young sister will be Väinämöinen’s bride.  The oldster accepts and frees Joukahainen.

However, things do not go smoothly, as the girl simply doesn’t want to be married to the elder and runs away in grief when her parents and brother inform her of her fate.  We see this plot point in the left panel of Gallen-Kallela’s Aino triptych.  At last she finds herself at the water, strips down and swims out to an island which promptly sinks and drowns her; this is depicted in the right panel.  She then becomes a little fish and when, by serendipity, Väinämöinen catches her and tosses her back in the water, she transforms back into herself, taunts the old man, and escapes forever, this final scene being the centerpiece of the triptych. 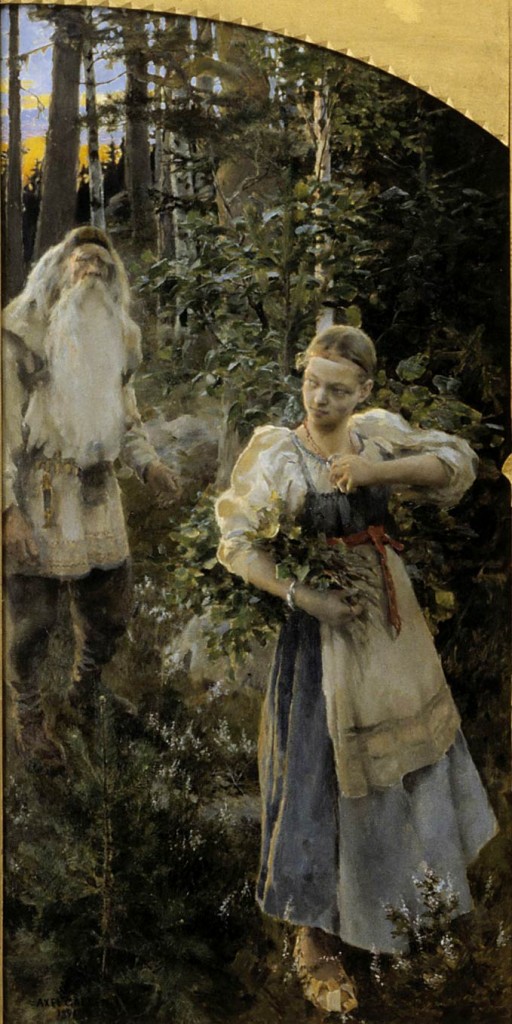 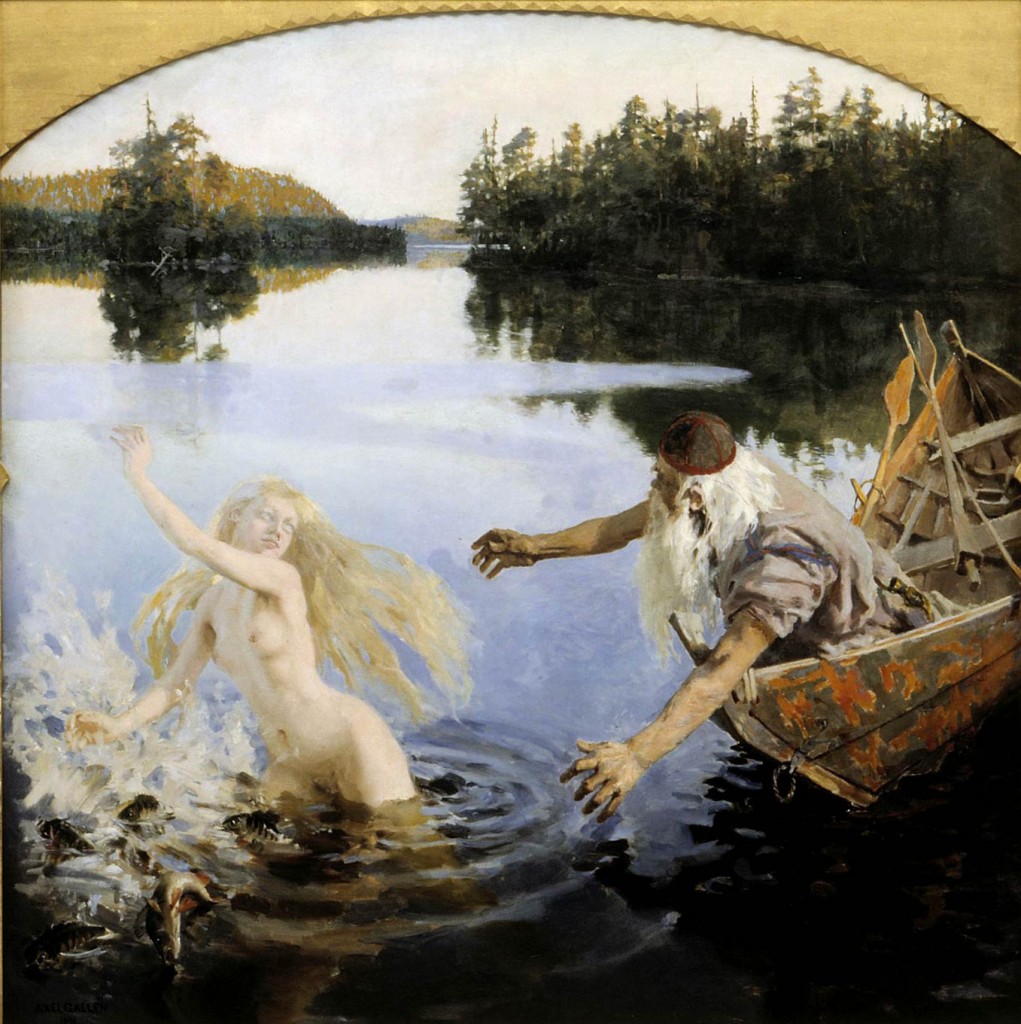 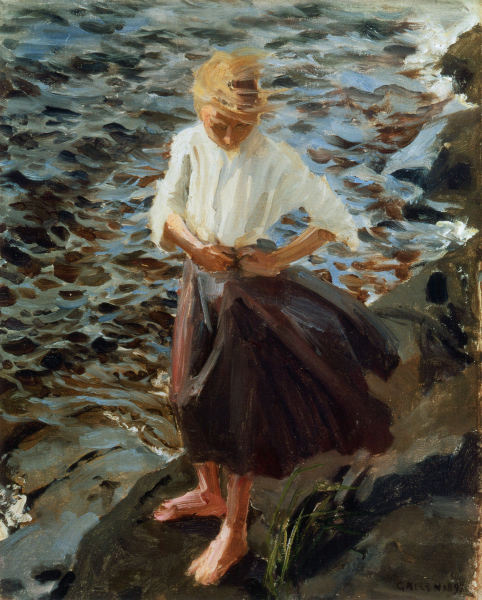 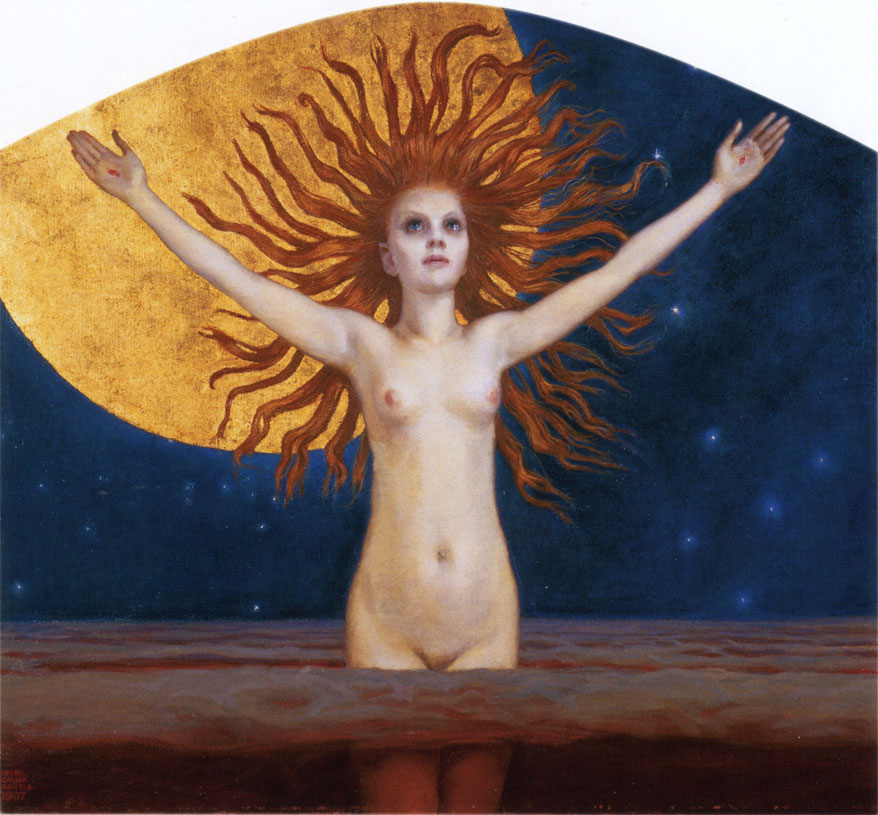 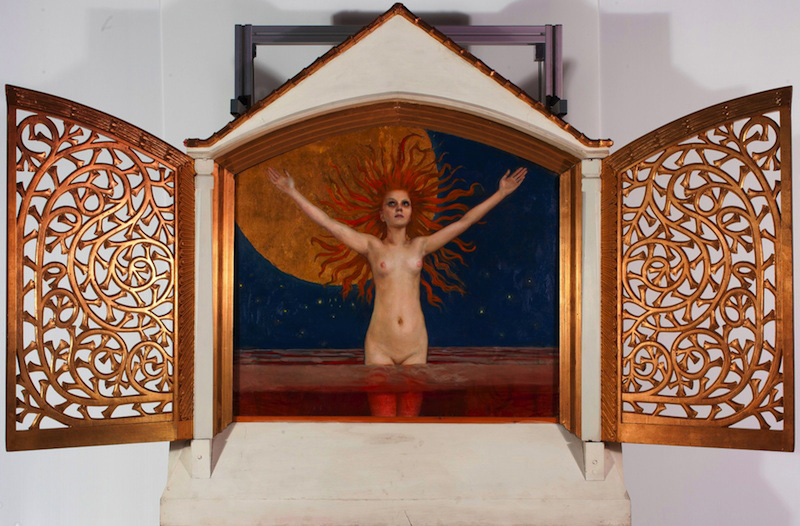 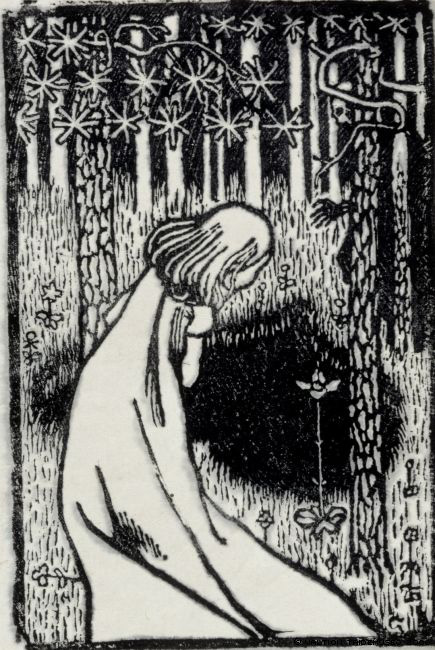 Aino is great, but this is my absolute favorite of the artist’s works.  It really puts me in the mind of Cornwell.  This is actually one of the fresco paintings for the Jusélius Mausoleum, commissioned by wealthy European industrialist  F.A. Jusélius in honor of his daughter, who had passed away at age 11.  Having lost a daughter of his own at a young age, one can see why Gallen-Kallela would be keen on undertaking that particular project.  Unfortunately, the originals were destroyed by fire, but Gallen-Kallela’s son Jorma repainted them in their entirety in the 1930s based on his father’s original sketches and designs.  Thank God for those!

The scene depicts people who have died waiting for their turn to cross into Tuonela, the Land of the Dead in Finnish lore, akin to the ancient Greek Hades.  Those in the boat have stripped off their clothing, thus shedding the last traces of their worldliness.  We see a young girl standing on shore, beginning to remove her dress.  She appears to be about 11, making her the same age as Jusélius’s daughter, and we can read her as a representative of the real-life deceased girl.  Taken from the bright, sunny world above all too soon, she is clearly unhappy, and we too feel saddened for her as we watch her ready herself to meet her fate.

Alternately she could be Tuonen tytti–the Maiden of Death–who, much like Charon in Greek mythology, serves as the ferryman who transports souls to Tuonela via boat.  This whole scene resonates with meaning. 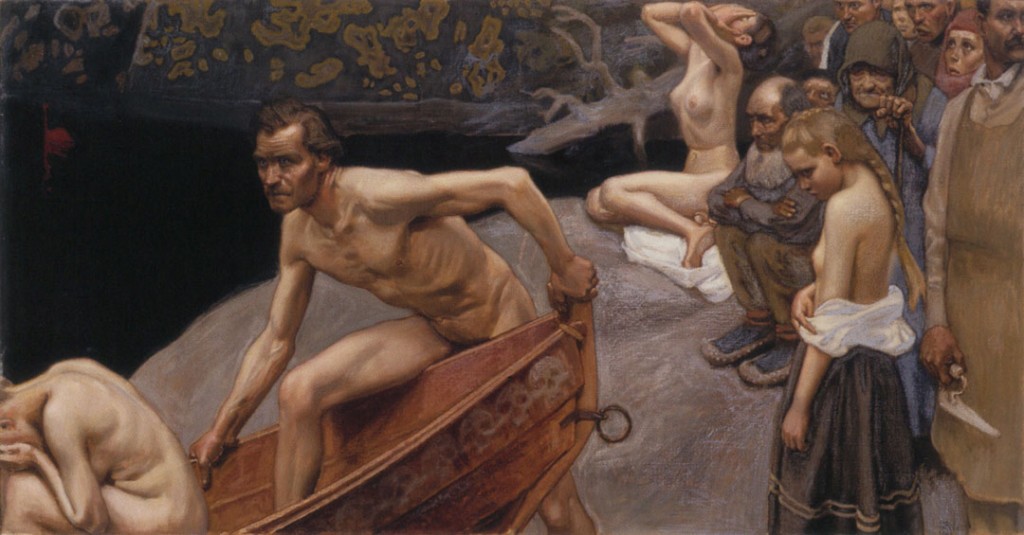 Akseli Gallen-Kallela – By the River of Tuonela (1903) 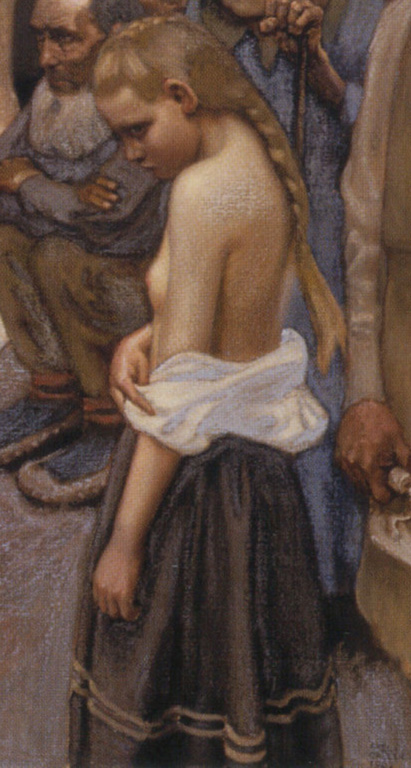 Another one of the frescoes from the Jusélius Mausoleum: 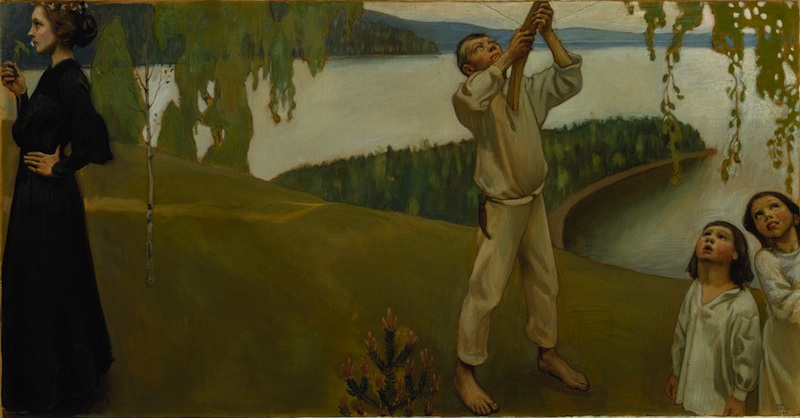 Gallen-Kallela would go on to paint another part of the story of old Väinämöinen.  Here we see the old wizard sitting quietly amidst a boat full of naked pubescent girls.  Yep, it was definitely a much different time. 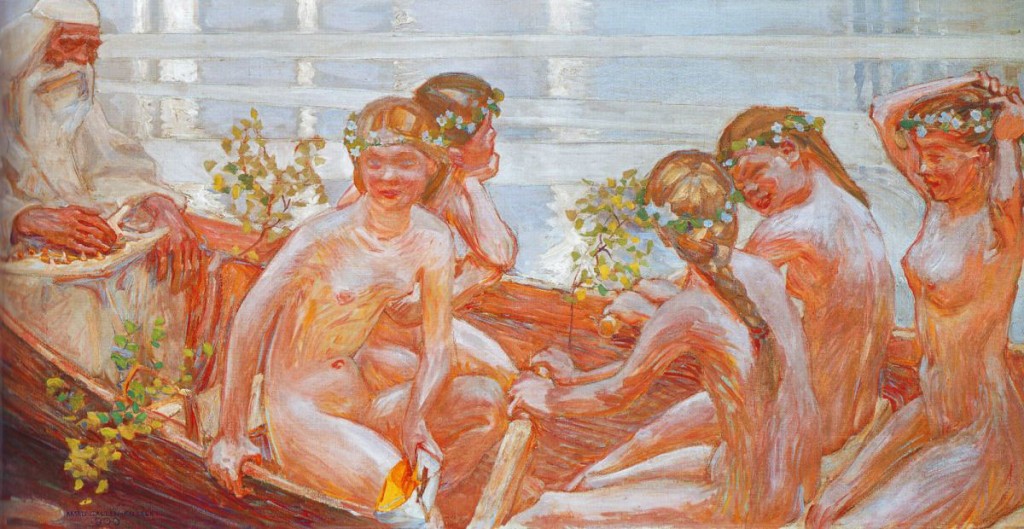 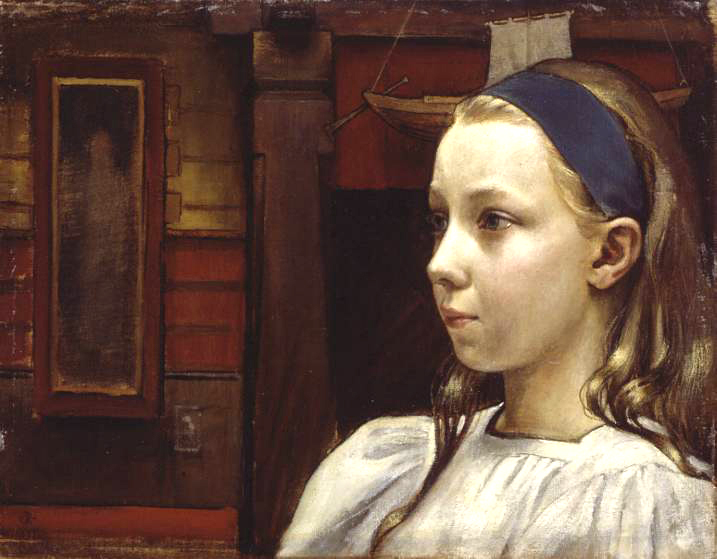 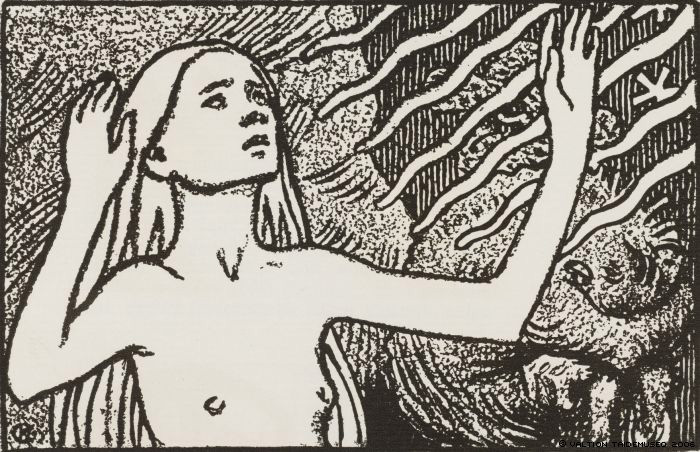 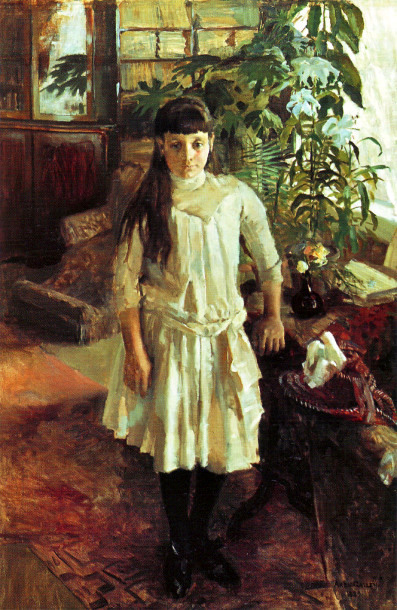