Blind Faith – Blind Faith: This would turn out to be the sole album put out by this early super-group (which included Eric Clapton, Ginger Baker, and Steve Winwood!)  The album cover–created by Bob Seidemann–was of course controversial, as it featured a topless pubescent girl holding a streamlined spaceship that bears a noticeable resemblance to a phallus.  The girl was 11 year old Mariora Goschen, the younger sister of a girl Seidemann spotted on the London subway and originally planned to use as the model.  The now-adult Mariora has expressed mixed views about her modelling for the album art, in part due to a claim that she did not receive the payment she originally requested (a horse) but was paid a mere £40 (40 pounds, or a little over 60 dollars at the current exchange rate) for posing topless for the album.

Now, I must confess here that I’m not quite as fond of this cover as I am of some of the others I’ve posted from the same era (namely Led Zeppelin’s Houses of the Holy).  This may be only my impression but the girl doesn’t look happy; in fact, she comes across to me as either a bit nervous or dumbfounded, maybe a little of both.  Even so, I do like the composition and design of it.  It’s not quite as transcendent as the Led Zep cover, but it certainly sticks in your head.  And I appreciate Seidemann’s philosophy in its creation:

I could not get my hands on the image until out of the mist a concept began to emerge. To symbolize the achievement of human creativity and its expression through technology a space ship was the material object. To carry this new spore into the universe, innocence would be the ideal bearer, a young girl, a girl as young as William Shakespeare’s Juliet. The space ship would be the fruit of the tree of knowledge and the girl, the fruit of the tree of life.

The space ship could be made by Mick Milligan, a jeweler at the Royal College of Art. The girl was another matter. If she were too old it would be cheesecake, too young and it would be nothing. The beginning of the transition from girl to woman, that is what I was after. That temporal point, that singular flare of radiant innocence. Where is that girl?

So there you have it. 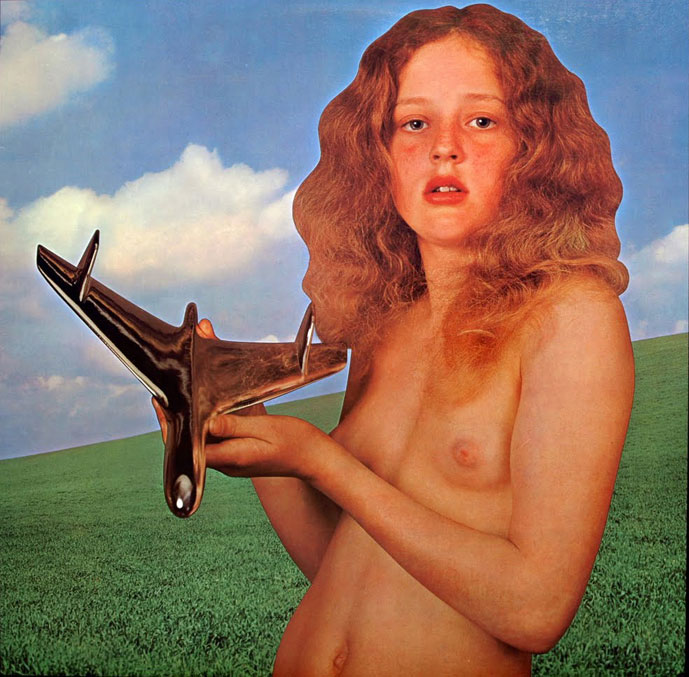 Blind Faith (Looks to be a fan site, but it’s pretty in-depth, and it includes the longer, more detailed explanation of the creation of the album cover by Seidemann from which the above two paragraphs were taken.)