This is an odd one. The cover of Van Halen’s Balance features naked conjoined twins sitting on a teeter-totter. There’s tons of irony in the image, which was actually conceived by Alex Van Halen but created by Glen Wexler. The irony is in the fact that, were the twin girls not conjoined, they would be perfectly balanced and could enjoy the teeter-totter, but because they are connected they must, by necessity, share a single side of the teeter-totter, rendering it useless. Hence their frustration with one another.

This album cover was originally censored in Japan. Not because of the nudity (Japan is generally quite liberal about nudity on book or album covers, as long as the genitalia isn’t visible) but because of the conjoined aspect of the image. Apparently the Japanese have a strong taboo about this; it just goes to show that taboos are not universal. Eventually an alternate version of the cover was created for the Japanese edition of the album, in which only one of the twins remained. This is unfortunate for the Japanese because they are missing out on all the interesting ironies and metaphorical aspects of the original design.

Edit: Glen Wexler, the designer and photographer, graciously wrote to Pigtails in Paint (which can be read in its entirety in the replies attached to this post) to correct several errors and misconceptions about this piece, including several by yours truly.  It is well worth reading. – Pip 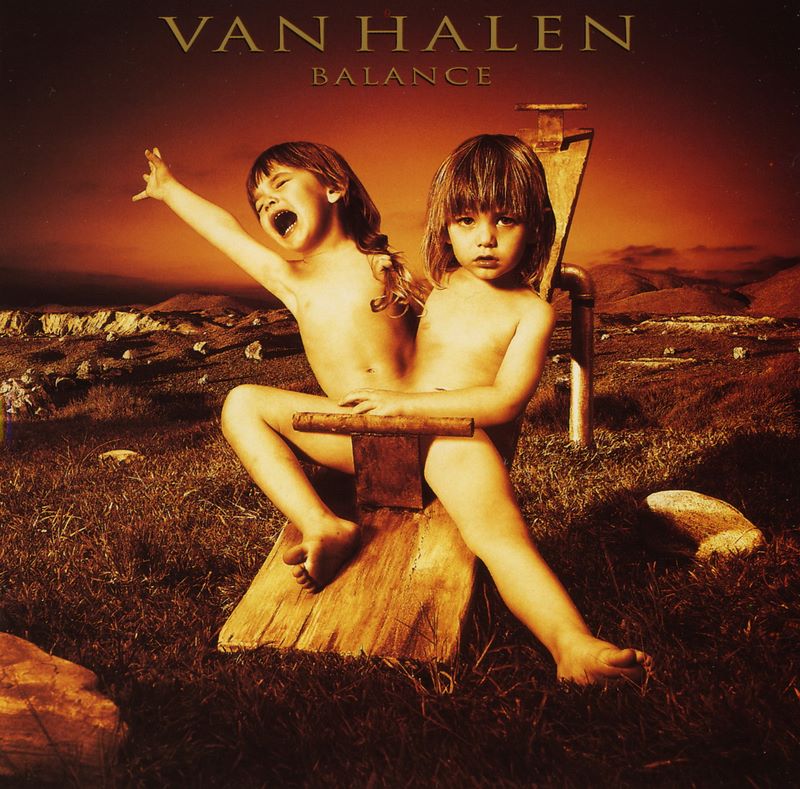 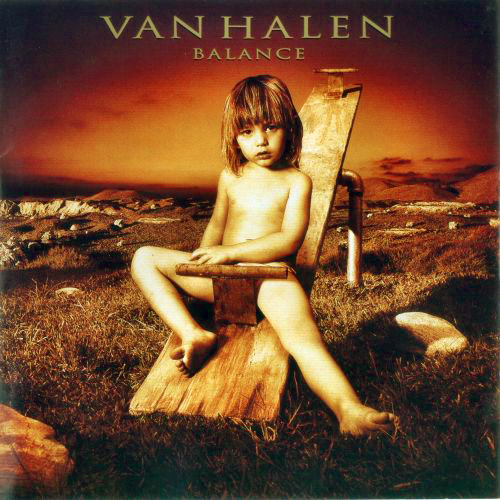 From Hugh Ziegler on March 13, 2012
This is actually a boy – Wolfgang Van Halen – son of Eddie Van Halen and Valerie Bertinelli. The “conjoined twins” image is meant to represent Eddie and Alex Van Halen.

From pipstarr72 on March 14, 2012
Ah, well, it looks enough like a girl to warrant the post. That is interesting though. And it presents a question: which one is pulling the hair, Eddie or Alex?

From Hugh Ziegler on March 14, 2012
Good question!
It’s probably Alex doing the pulling – notice the diifferent lengths of Wolfgang-Left’s and Wolfgang-Right’s hair. A lot of promo pics for Van Halen show Alex with hair just above his shoulders and Eddie with long hair.
Now – if Eddie had a daughter – she would look very much like the child on the teeter-totter anyway.

From pipstarr72 on March 14, 2012
I’ve always assumed these were girls; that they’re boys doesn’t surprise me, but in the context of the design the child’s sex is really irrelevant (as it is irrelevant with Buckcherry’s ‘Time Bomb’ cover, where the sex of the child is even more ambiguous.) So yeah, at that age a boy and girl look pretty much the same absent the artificial social cues we give them (like long hair for girls and short for boys.)

From Glen Wexler on March 14, 2012
As the creator of the images, I thought I would chime in to set the record straight.
First off, the analysis of the piece is spot on. It’s all about the layers of irony.
Warner Bros. was also aware of the Japanese cultural issues regarding deformities in advance of the release, and we created the second version for that market. MTV and other press made a big deal about the album cover being “censored in Japan.” That was simply a distortion to fabricate a “news” story.
The original title of the album was “The Seventh Seal.” I originally worked on concepts to illustrate that title. One of the ideas involved an image of a young child. During the casting session I found this very androgynous looking four-year-old boy. The boy is NOT Wolfie, who was a bit younger at the time. The band came to the conclusion that “The Seventh Seal” was not the best title and we switched directions for the cover art.
When I asked what the new title “Balance,” meant to the band, Alex discussed the turmoil and changes surrounding Van Halen. We settled on the notion of exploring the duality of the human psyche. I produced several rough sketches to illustrate the concept, including the conjoined twins on the seesaw, which would be created by combining photographs of the androgynous child.
Any speculation that one side represented Alex and the other Eddie is just that. It was never intended.

From pipstarr72 on March 15, 2012
Glen, thank you so much for your input! I have long been intrigued by this image, and I confess that I bought the album in when I was in high school specifically because of the cover (not that I didn’t like the band, but as an aspiring graphic designer myself I frequently bought albums and other things because of the cover designs.) In fact, I very much prefer your dualistic symbolism to the story circulating about Alex and Eddie anyway. And I likewise appreciate your setting the record straight regarding Japan’s squeamishness about the conjoined twins. And I have to say, given some of the art I’ve seen produced in Japan lately, the secondary design was probably unnecessary in the end. But, well, it was a different time, so what do I know? Thanks again!

From Hugh Ziegler on March 15, 2012
I respectfully stand corrected then – Thank you!

From Hugh Ziegler on March 16, 2012
One interesting thing I just realized about the way the boy is posing — it looks like he is making a ” V” and an “H” shape with his conjoined body.

From pipstarr72 on March 16, 2012
Hmm, I didn’t notice that before, but now that you point it out . . . Probably not intentional, but still very interesting.

From pipstarr72 on March 17, 2012
Excellent! You definitely put a lot of thought into this design.