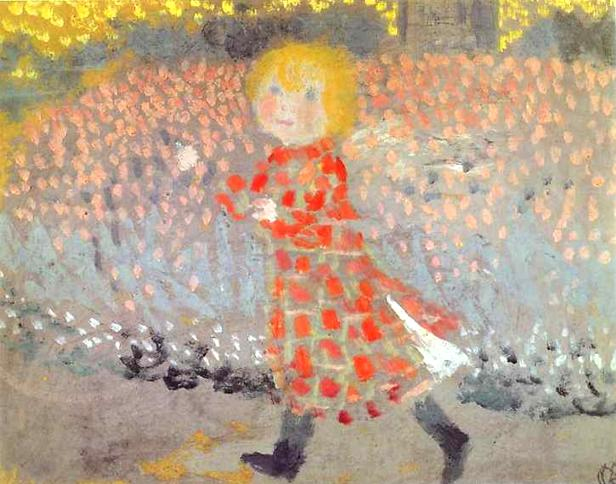 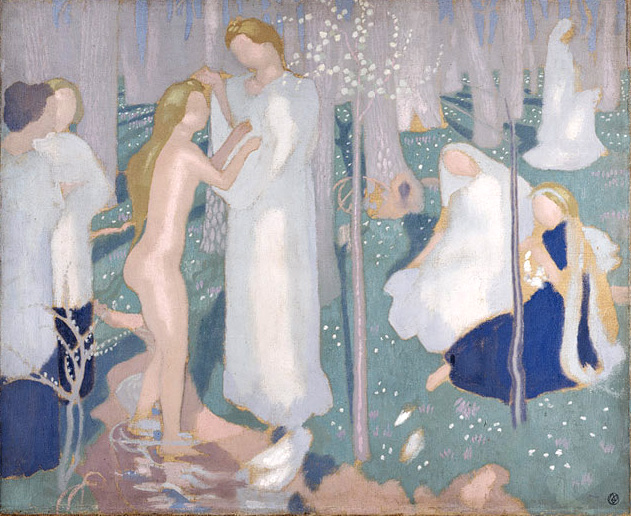 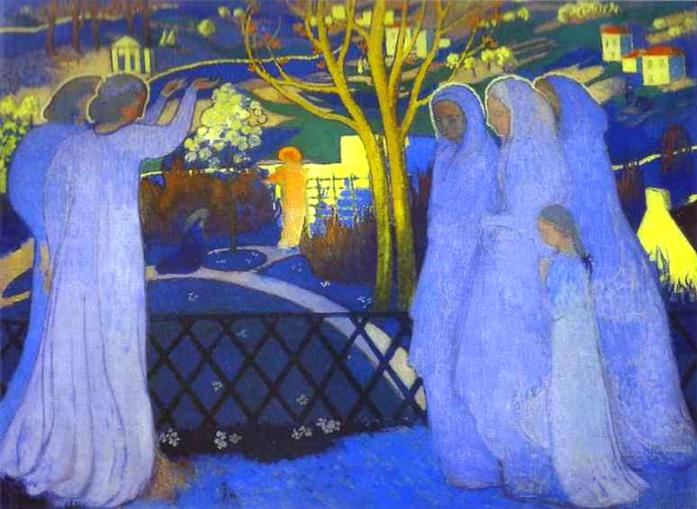 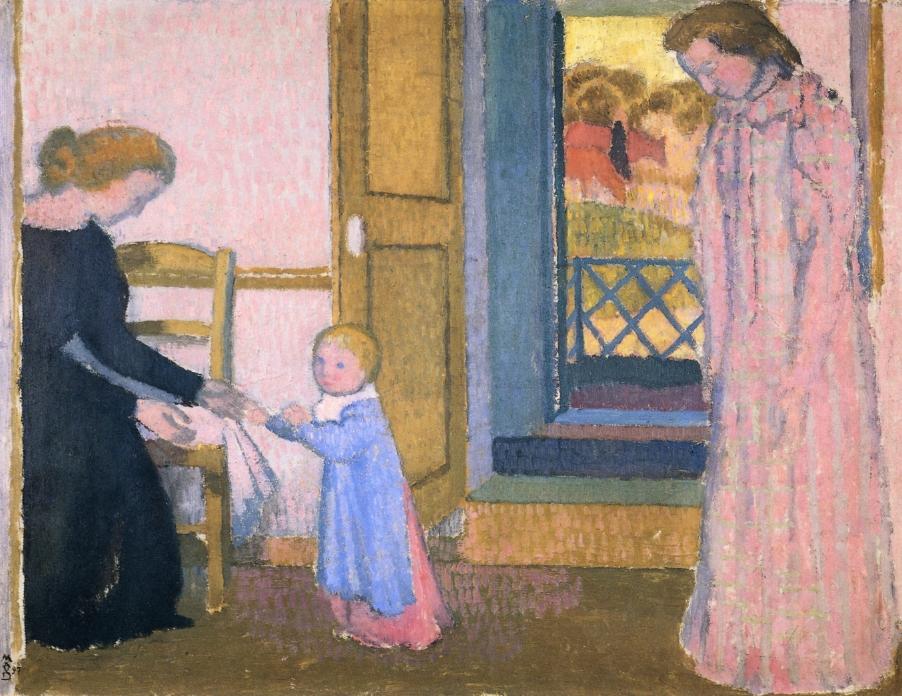 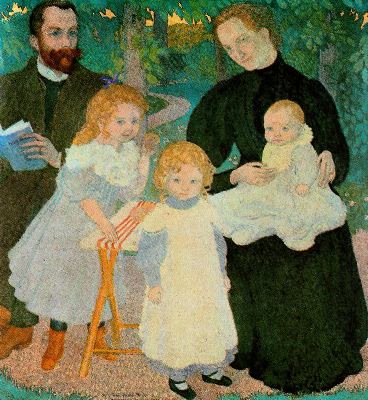 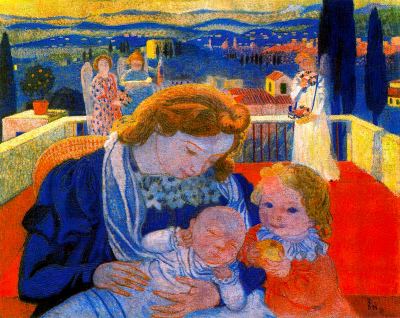 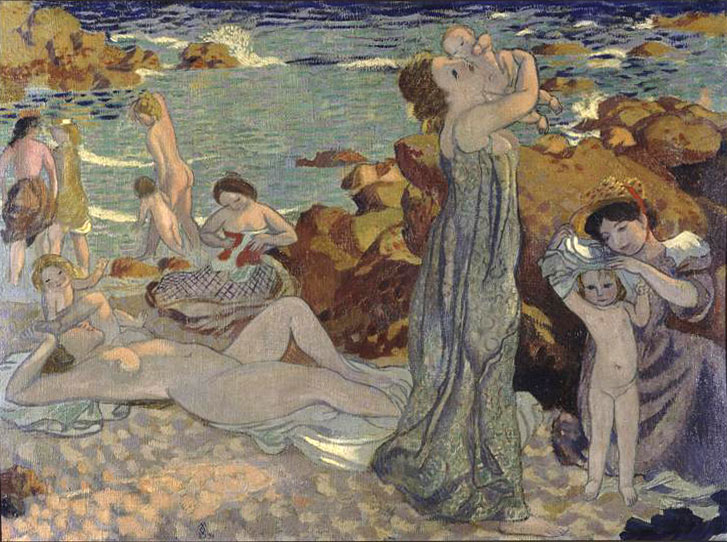 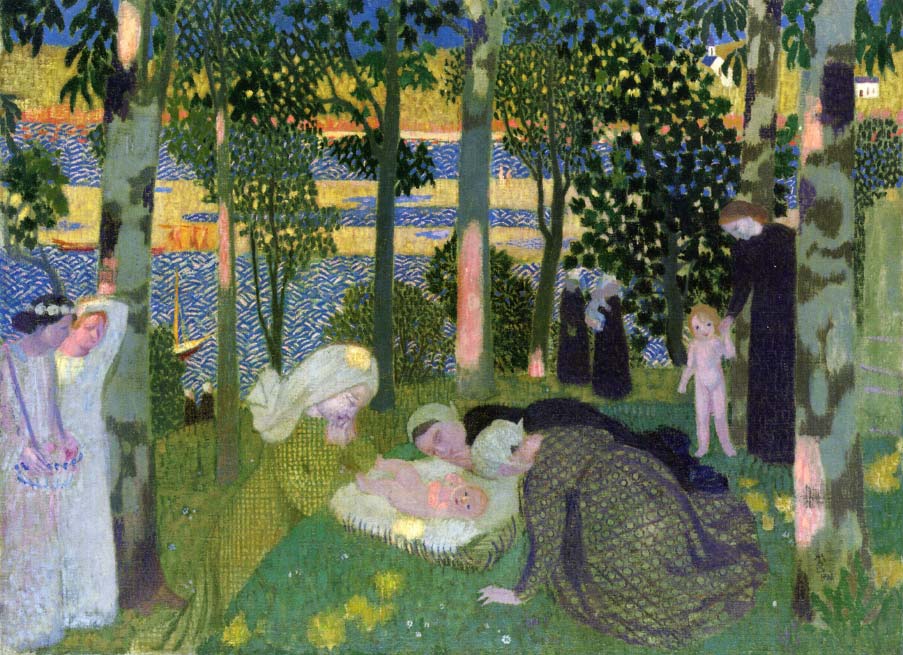 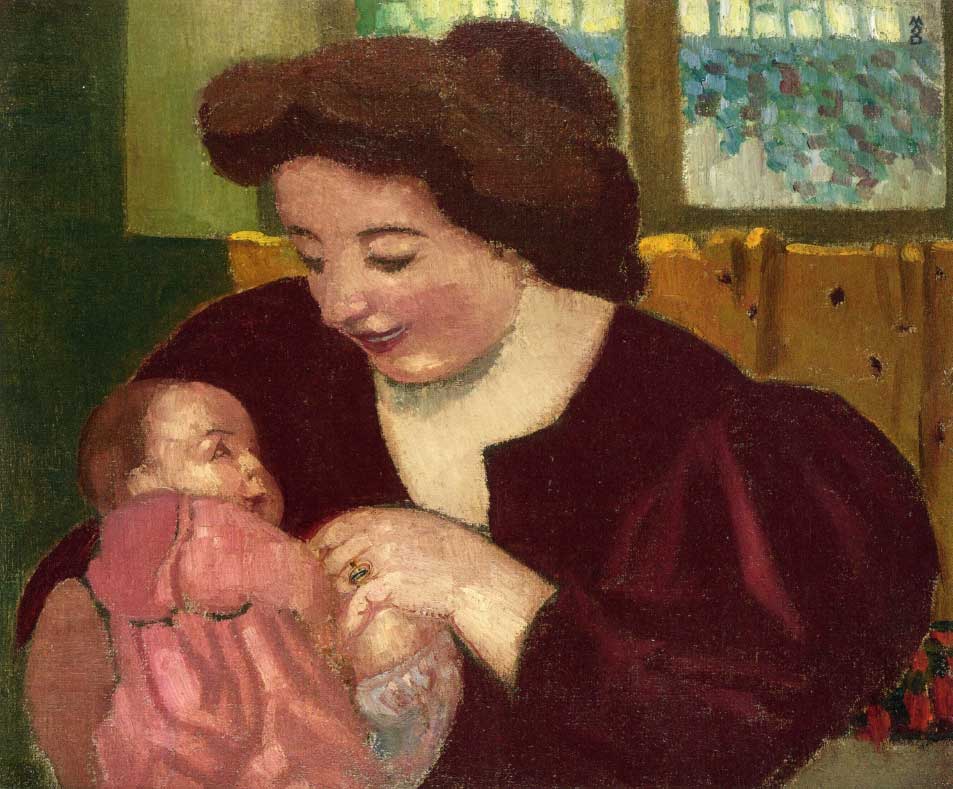 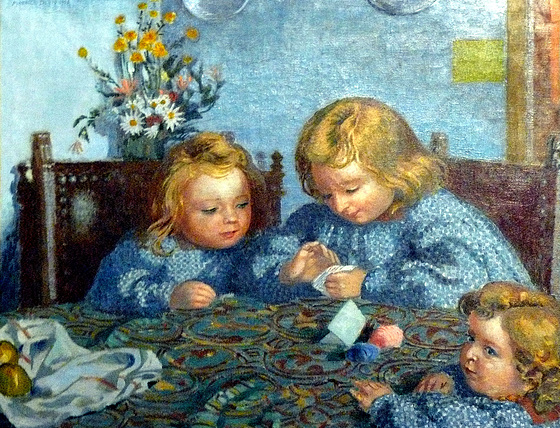 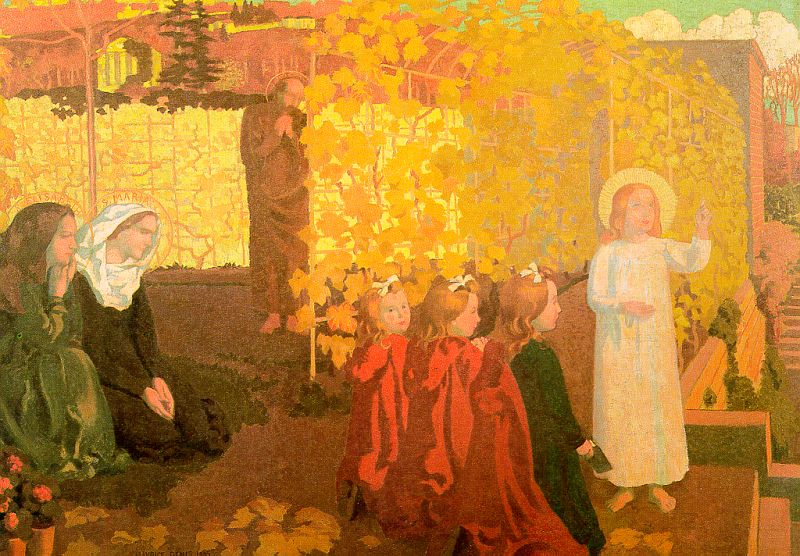 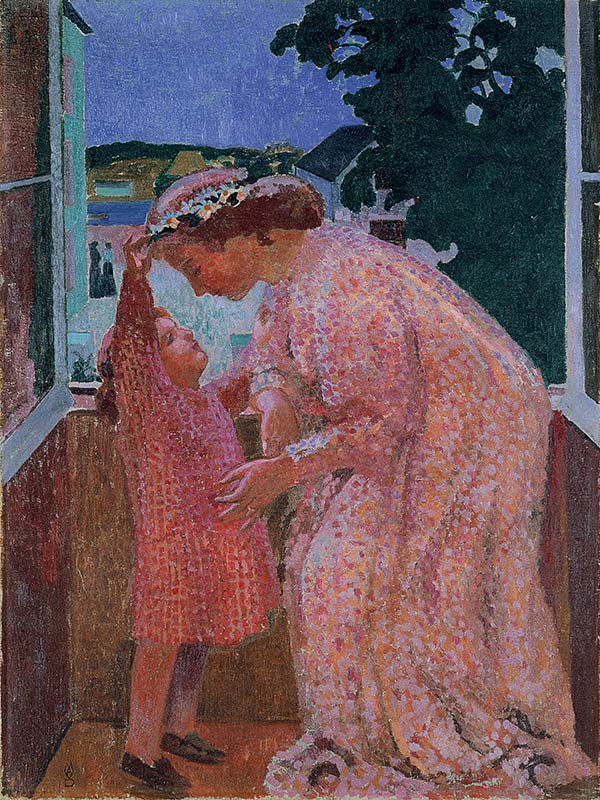 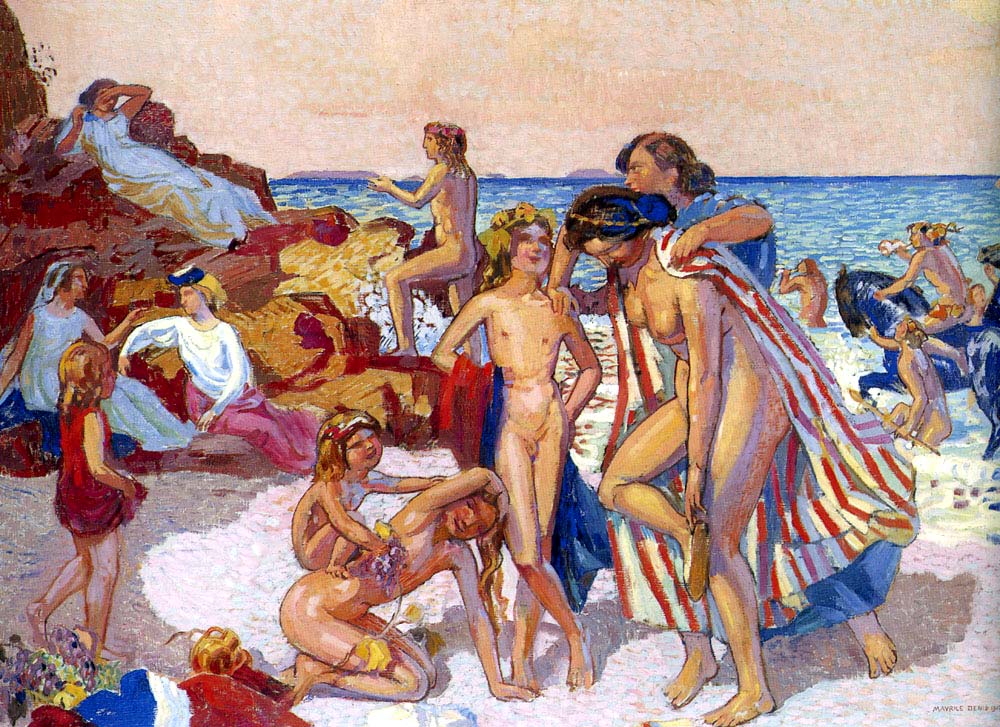 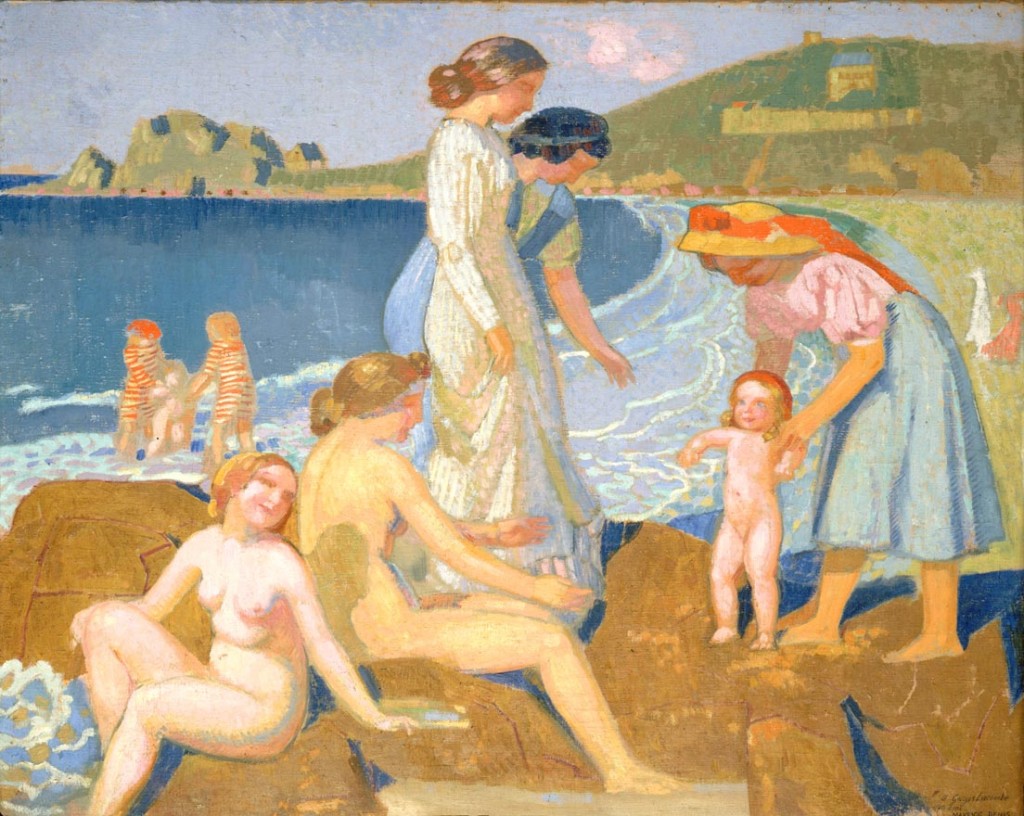 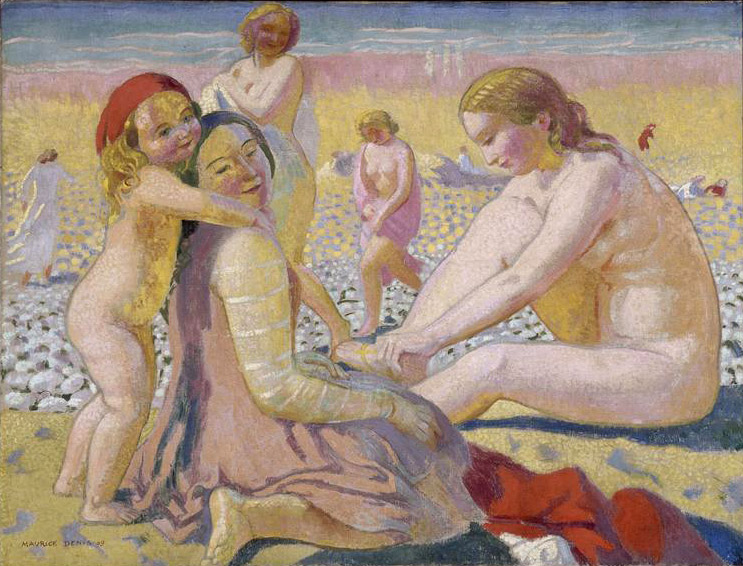 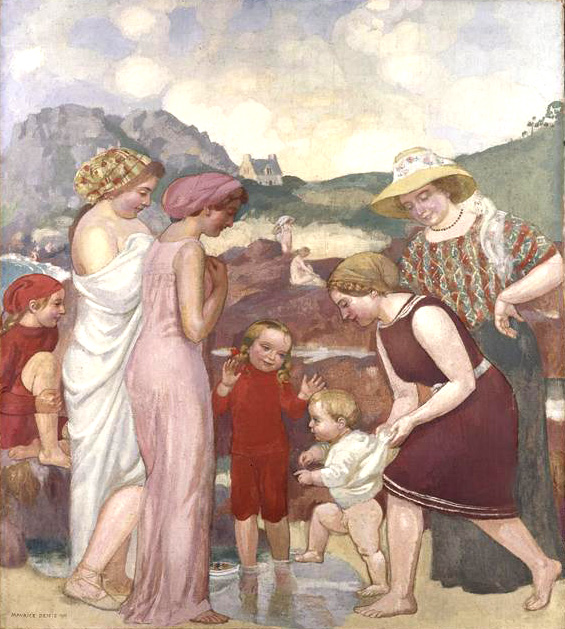 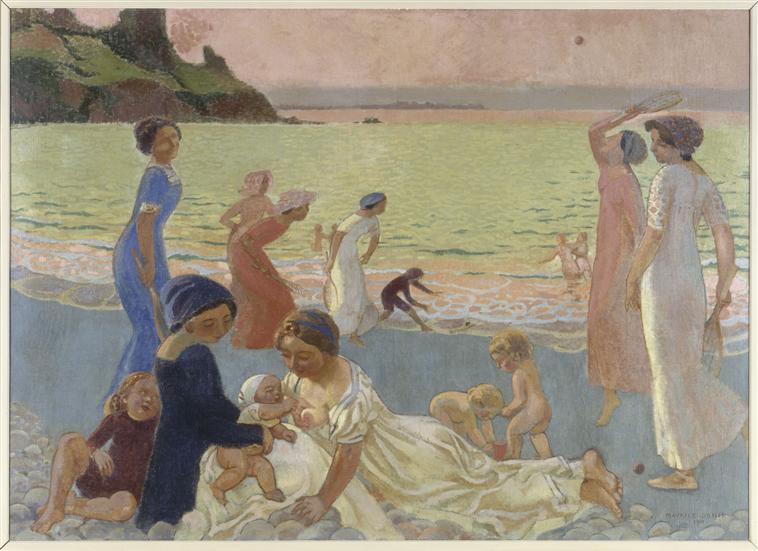 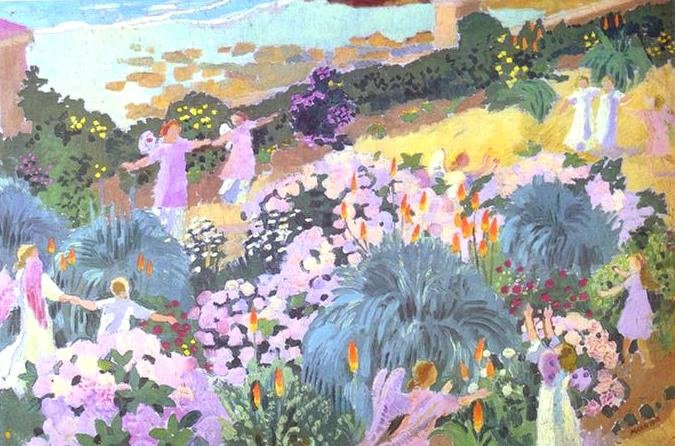 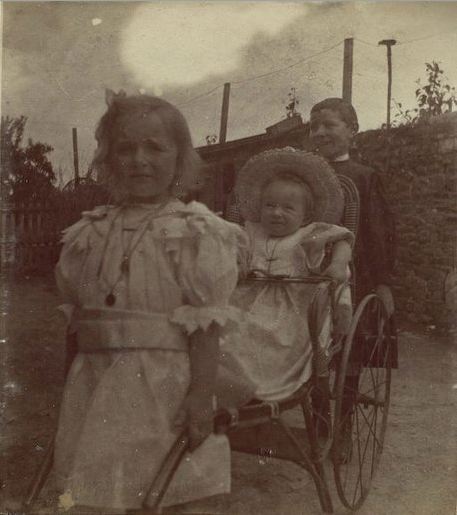 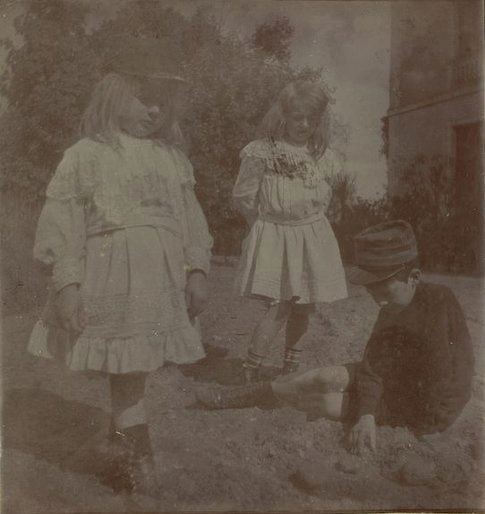 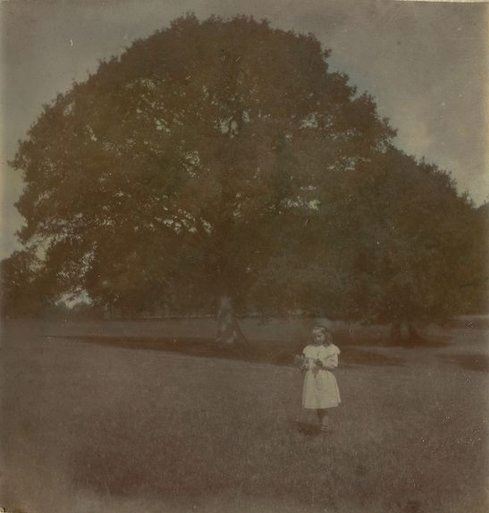 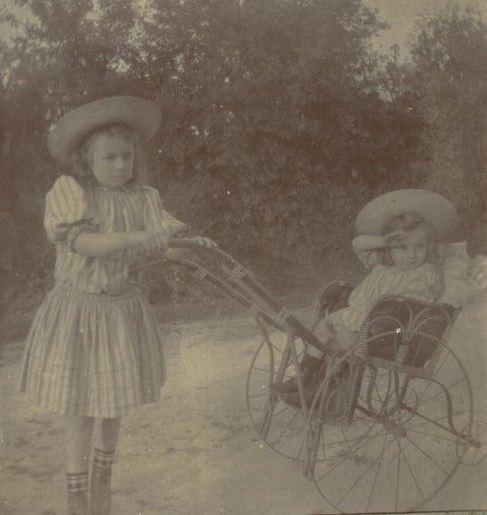 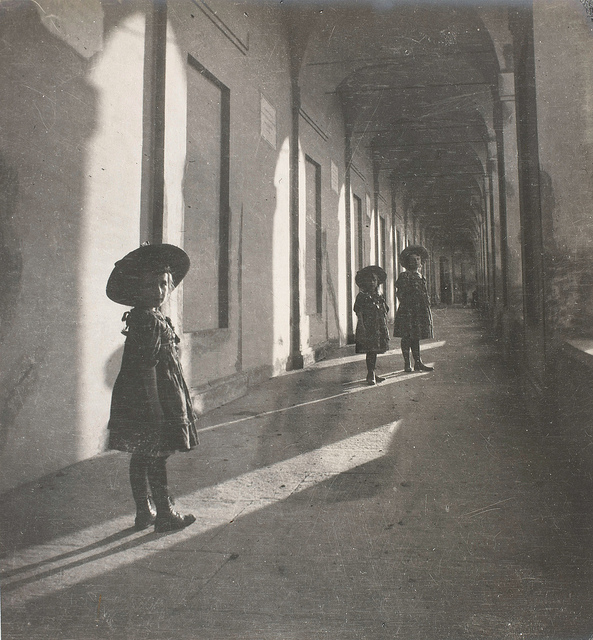 Maurice Denis – Anne-Marie, Bernadette, and Noëlle under an arcade, Bologna (1907)

From Bill Tree on February 27, 2012
A question…not specifically about this artist, but exemplified here:
Why does it seem that there are so many nude beach scenes from art of the past. As in a family, or even a few close families, or a pack of friends, and their kids, hanging out at the shore aux natural. Sometimes it’s just women, or women and kids, but often kids of both sexes, up into their teens, and sometimes adult males there too. Adult males naked around naked women who aren’t their wives (they can’t all be). Naked adult males around naked children of both sexes. Naked children of both sexes around each-other. All hanging out, enjoying the beach as if it were the most normal thing in the world.
Why do I seem so surprised? Well, so many of these painting are from the Victorian era…one of the most notoriously prudish, uptight, non-sexual (outwardly), and generally religiously conservative eras in the history of the human race. Yet, they were able to hang out at the beach naked together?
These days? In our “Free” and “progressive” and “advanced” society, it’s only the fringe weirdos and hippies who would swim naked, or let their children see their naked bodies. What’s up humans?
The Victorians are accused of putting skirts on the legs of their pianos, because a bare “leg” was provocative. I think we should all put jeggings on the legs of our computer desks to remind ourselves how much of the freedom and connection to what is natural we’ve lost…without even noticing.

From pipstarr72 on February 28, 2012
Well, in order to put these scenes in proper context, we need to understand a few things. First, in terms of children, it is important to note that the Victorians saw them as perfectly innocent and asexual beings. In that sense they were unafraid to portray children in the nude because they projected this concept onto kids and did not see kids as being sexually corruptible the way modern viewers do. And the moral panic over sexual predators is largely a modern fabrication, so what the Victorians see in the nude child is not an erotic being but an angelic one, a being stripped of all pretence and the trappings of the secular world. The second thing to remember is that these scenes may not reflect an accurate view of reality. Remember, the Victorians were rather obsessed with the classical world, and thus these beach nude scenes fall into the same category as idylls, which are scenes of families in a peaceful natural setting, in which the figures are often nude or semi-nude. The idea there is sort of an extension of the ‘child as spiritually pure’ concept: it is a nod to time in history when things were much less complicated, more innocent, if you will. These idylls are really allegorical–they are intended to suggest that humanity should strive to be like children or like classical man, to do away with modern corrupting influences and artifice. This was, of course, an unachievable goal. In fact, I see the notion as a decadent one. If you think about it, the Nazis and the Soviet Socialists had similar goals in mind. The Nazis wanted to purge what they saw as outside influences that corrupted their Aryan culture, and they obsessed on the old gods and mythology of Germany. The Socialists tried to re-elevate the working class to conditions like those of the past, prior to the Industrial Age, where craftsmen and workers reaped the direct rewards of their labor. One reason why I’m so fascinated with Symbolism is that it was an art movement (well, it’s better to say that it was less a cohesive movement than an overarching philosophy) in which the unconscious feelings and motivations, hopes and dreams of humanity were manifest. Symbolism can also be considered a precursor of sorts to modern fantasy art.

From Bill Tree on February 27, 2012
Two:
Why don’t these archivists with these priceless old photos take 10 minutes and use some of Photoshop’s built in features to rescue them. At least make them visible…it’s easy. Moderator, let me know if you want to see what I can do to even a low rez image like these…fast.

From pipstarr72 on February 28, 2012
I appreciate the offer, but I possess the same skills with Photoshop and have actually touched up some images here for various reasons. The thing is, I try to balance fixing small flaws in the images against preserving the integrity of the original artwork or photograph. I don’t want to alter the images too much from how they would appear in the original form, and I suspect a lot of these old photographs are pretty poor in quality anyway. The reason high-quality early photographers are remembered has less to do with artistic originality (as it does with art photographers today) than with their dedication to perfecting their technique.

From Bill Tree on February 28, 2012
Hi Pip,
Please, no offence about the photo correction. I wasn’t suggesting that you do it for images on your blog. I just don’t see why the owners of the originals, the source of these images, and likely the people who value them the most, don’t take some time to get the most out of them. And yes, there is intrinsic value in the historical accuracy of an image. Then again, sometimes you want to show the subject in question…especially of they are a person of interest. The dichotomy is the “art of the historic shot” or the “representation of a historic figure”.
As for the nude beach scenes, yes I agree. The idealism of the artist, and their utopian agenda (thank god). And their circle of friends as models, also on the progressive/liberal end of the social spectrum. All adds up to some images that don’t necessarily represent the status quo.
On the other hand, I just read an interesting theory that the myth of the Mermaid may have come from the dualism between “defined” social appropriateness (in the ivory towers), and actual traditional social behaviors/norms at the commoner level. The idea was that in traditional communities, be it Asian pearl/shellfish divers, or European fishing communities, Women (especially…but that’s a deeper discussion) may have been swimming nude as part of daily life’s work. Long after the church considered this inappropriate, remote villagers may have been flashing their bodies to seamen explorers. Check it out…ties in to the power of the women being suppressed by patriarchal society, and women’s physiological ability to free dive better than men.
Ben

From Bill Tree on February 28, 2012
Oh, my point about mermaids…that perhaps hanging out at the beach nude was actually more appropriate in traditional communities that the “definers” of Victorian morals would have wanted to admit. I’d like to think so.

2 thoughts on “The Powerhouses of Symbolism: Maurice Denis”