I’ve been intrigued by this painting ever since I discovered it in high school.  Surrealism is one of my favorite styles of art, and of course Salvador Dalí was the pioneer and king of surrealism.  Two things in particular fascinate me about this.  The first is that the image is a perfect metaphor for surrealism itself.  The dream realm is a liquid one, a place of shifting time, space and consciousness, beneath which we lay sleeping like the dog.  But in terms of the dog, the painting also contains a clever joke—the little girl (representing Dalí), in peeling back the waters as one would peel back a blanket, is bucking the old idiomatic exhortation to let sleeping dogs lie. Ergo, Dalí the painter, in probing the underbelly of consciousness through his art, recognizes that he may be disturbing—or even deliberately provoking—the beneficent slumbering animal of artistic and cultural tradition. And what’s more, he is delving into the tricky, parlous arena of the mind.  Will the disturbed dog bite?  Well, we cannot know until he is actually awakened, can we?

The second thing about this piece that draws my attention is Dalí’s elected alter ego, the nude young girl.  Whether consciously chosen or not, this may be a nod to Lewis Carroll’s own little girl stand-in, Alice, who enters her own dreamlike reality in the form of Wonderland.  We know Dalí read Alice’s Adventures in Wonderland and was inspired by it; he eventually even created his own illustrations for it. In terms of the little girl’s nudity, it is possible that Dalí knew of Carroll’s interest in the naked female child as an artistic subject and even of Carroll’s famous photographs of the same, but I rather think that was not the intention here. I believe Dalí was simply acknowledging his own vulnerability as a psychic explorer in the unmapped (and therefore potentially dangerous) regions of the unconscious mind. 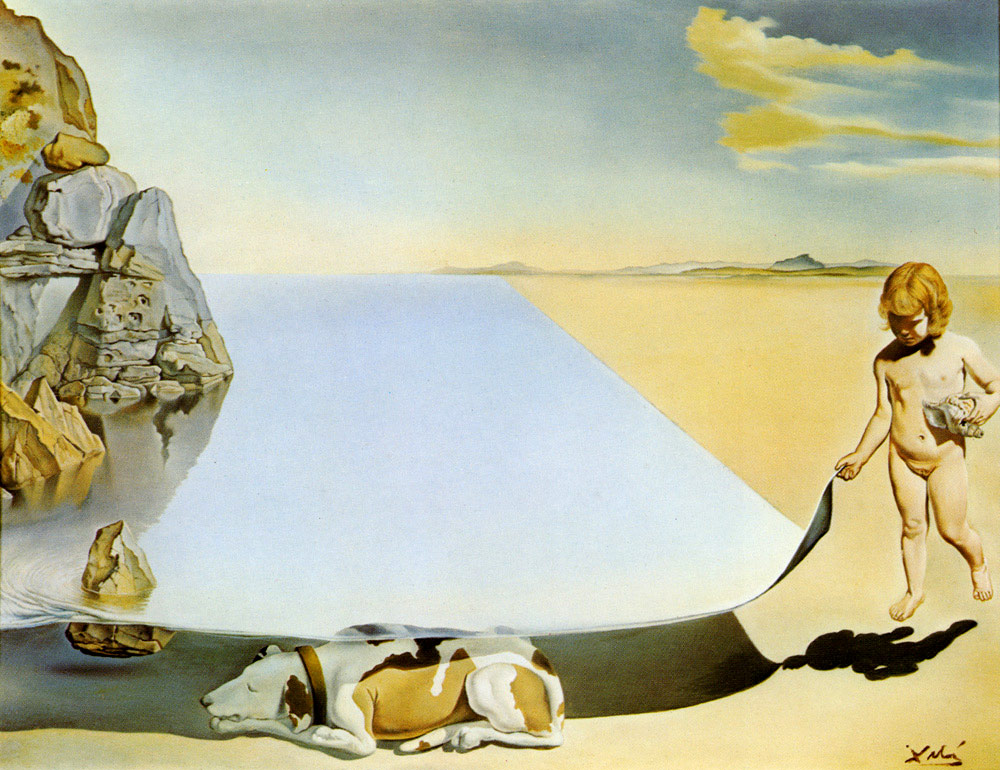 Those are a few, but there are many websites and pages online dedicated to Dalí. He remains one of the most popular artists ever to this day, and his work is reproduced everywhere.