Well, I have clearly taken a detour from my original plans for this month. I have been doing a lot of sculpture lately, so let’s continue with that, shall we?

This is excellent all around, perhaps one of the most beautiful objects in existence, and it is, of course, in Paris, France, a city chock full of beautiful objects.  Before you peruse this post, I recommend you read the Wikipedia page on Pont Alexandre III and some other pages you can find about it because it has quite a lot of history behind it and I am not going to recount all of it here.  Suffice it to say, this bridge is an amazing piece of architecture in a number of ways.  It spans the river Seine between the Champs-Élysées and Les Invalides portions of the city, near the Grand Palais.

What’s most fascinating to me about this bridge is that a number of sculptors worked on the decoration for it, but they all did pieces that complemented the work of the others, holding to a style that was nicely balanced between Neoclassicism and art nouveau, with touches of Rococo thrown in, a heady mix indeed.  The bridge was in fact only one portion of a large-scale project which also included the Grand Palais and Petit Palais, all done as a lead-in to the Exposition Universelle that took place in 1900. 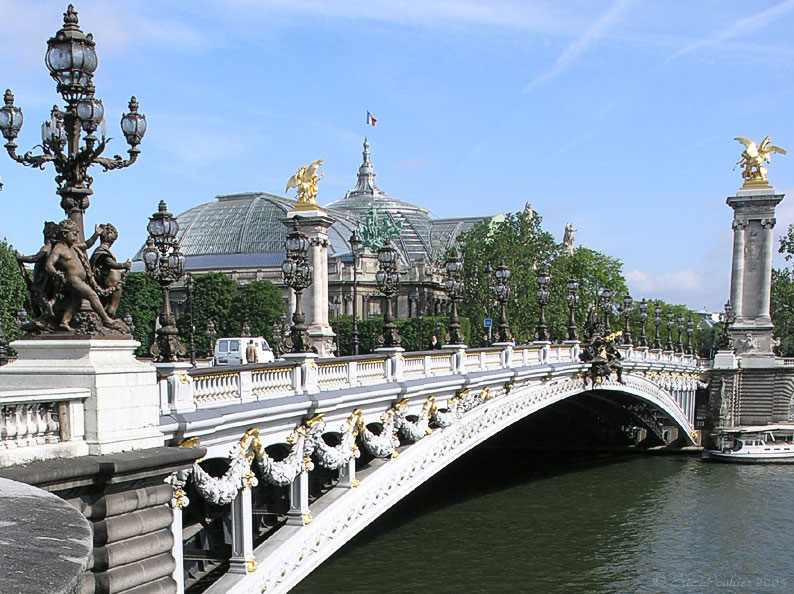 Among the sculptural works on the bridge are four children–two girls and two boys–representing different aspects of the sea.  Two separate sculptors tackled these four pieces, a boy and girl each.  André Massoulle worked on “Génie au trident” (boy) and “Néréide” (girl) while Léopold Morice undertook the sculpting of “Enfant au crabe” (boy) and “Fillette à la coquille” (girl).  We, however, are only concerned with the girls here, but I recommend that you take a look at all of these pieces, as well as the fabulous candelabras made by Henri Désiré Gauquié.  The candelabras at the ends of the bridge, one of which you can see above, are ringed with putti.  It is worth noting that Gauquié not only kept the traditional male putti but also went out of his way to make some of them female, as can be seen by comparing the two examples below: 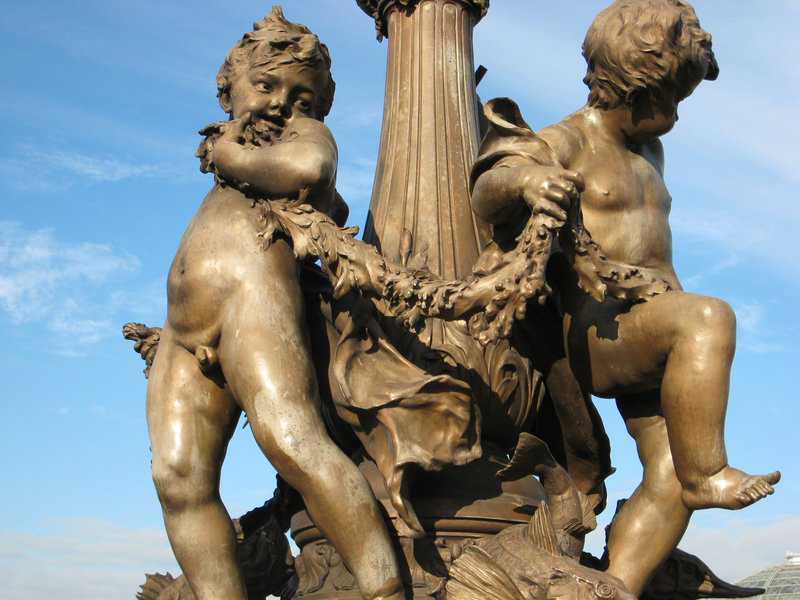 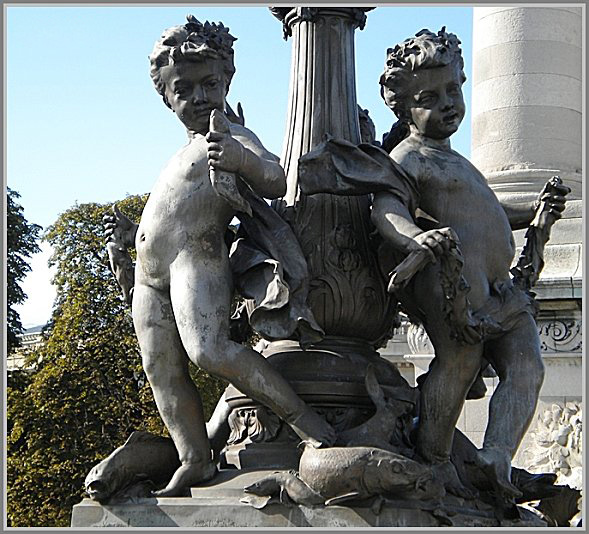 Now to Massoulle and his “Néréide.”  The Nereid comes from Greek mythology and was one of the fifty daughters of the Sea Titan, Nereus, and his wife Doris.  Massoulle, in keeping with the child theme of these four figures, has made his Nereid a little girl.  It may at first be difficult to tell this figure is female, but one can tell first by the slight swelling of the aureoles, denoting a girl just entering puberty, and second from the elaborate hairstyle. 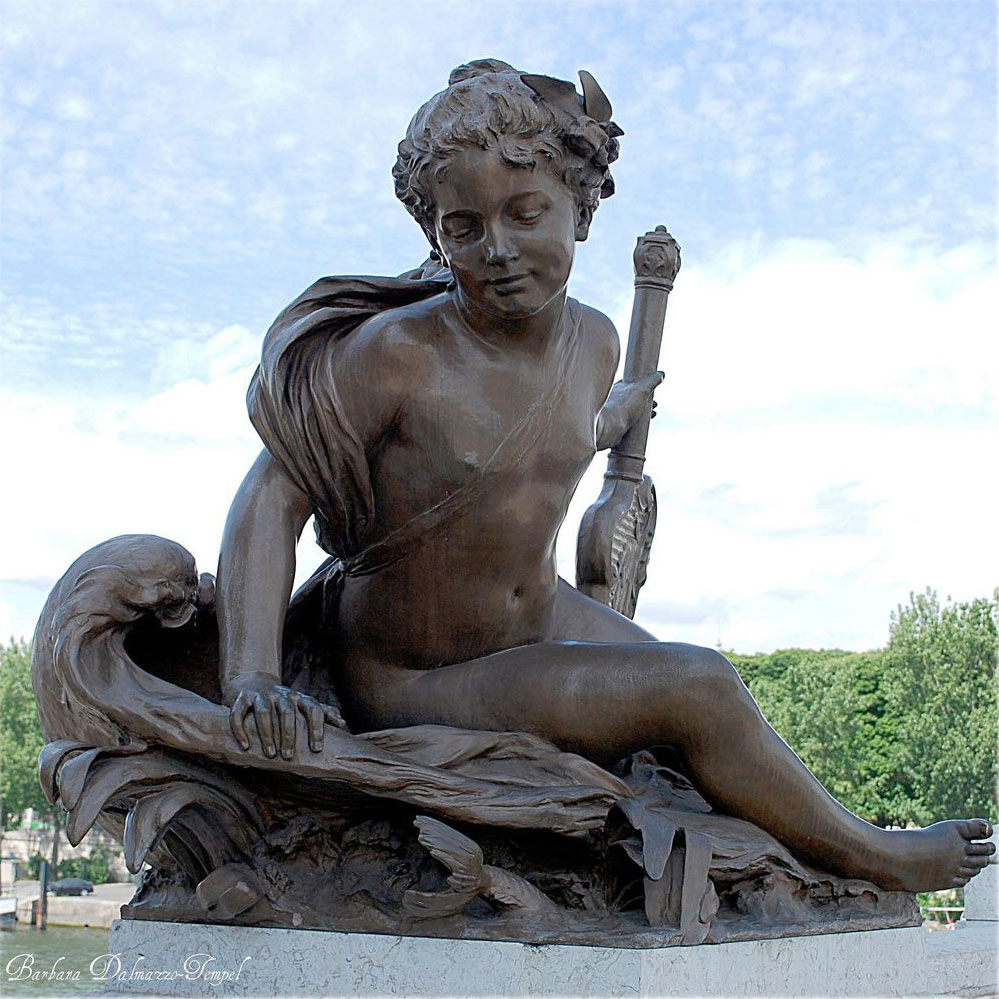 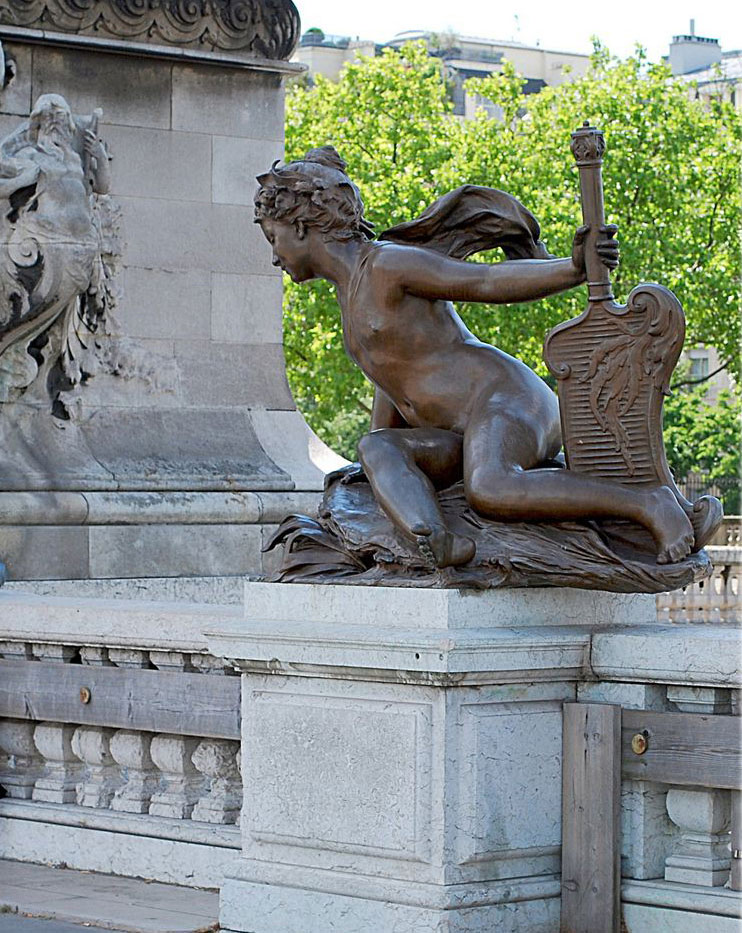 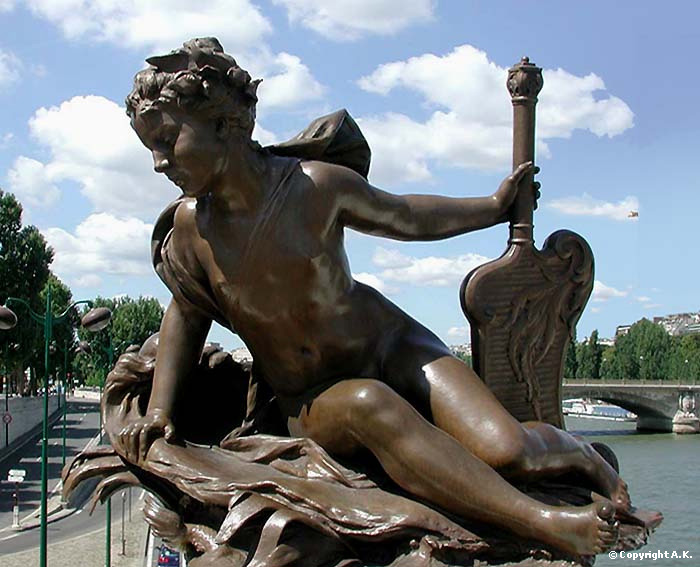 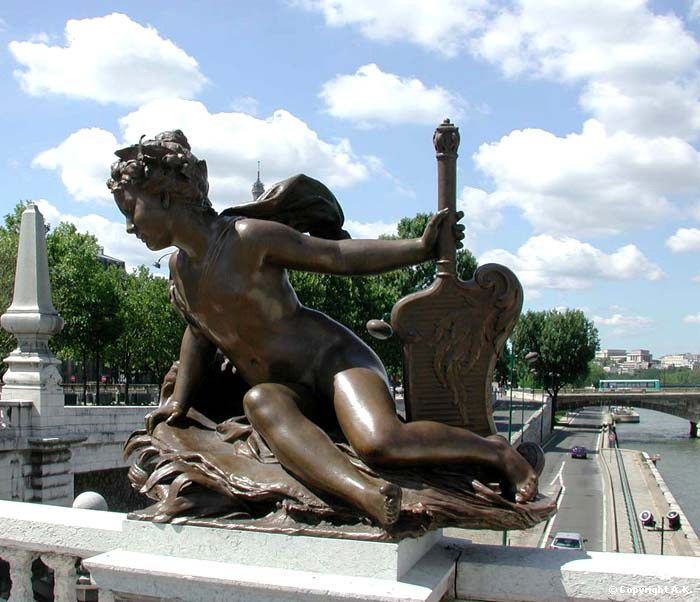 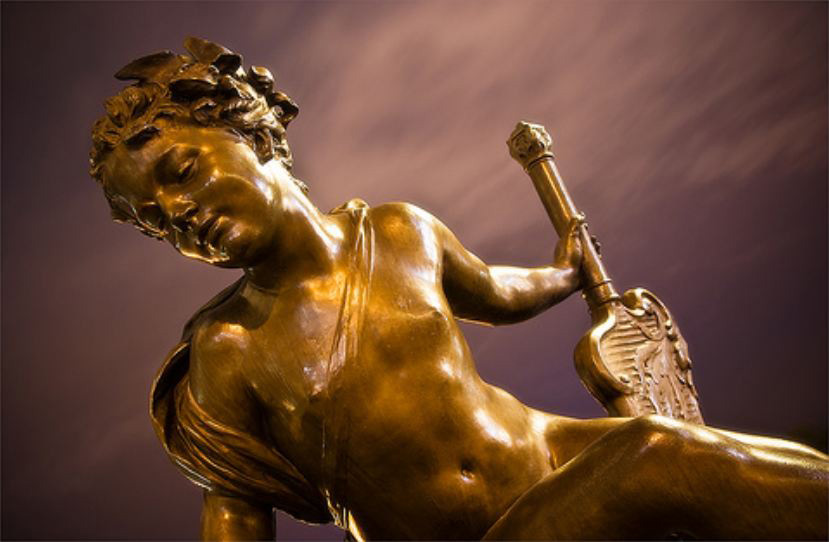 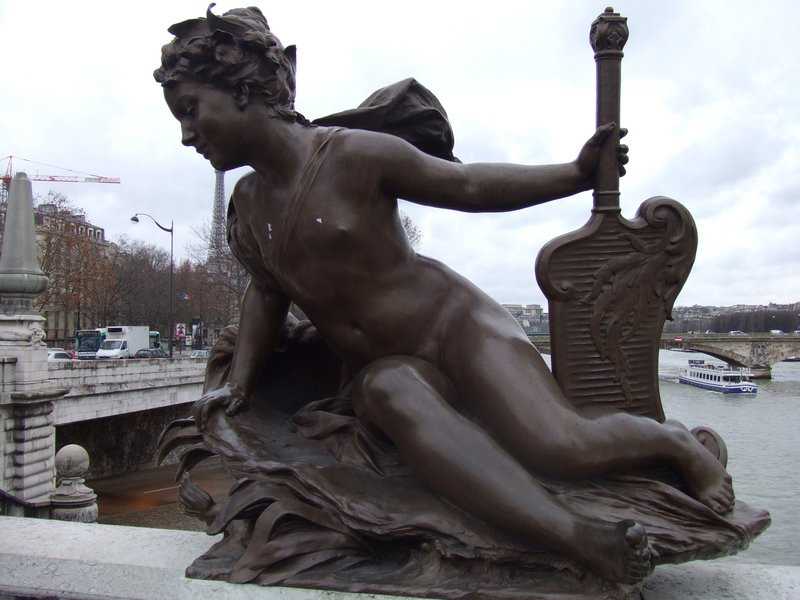 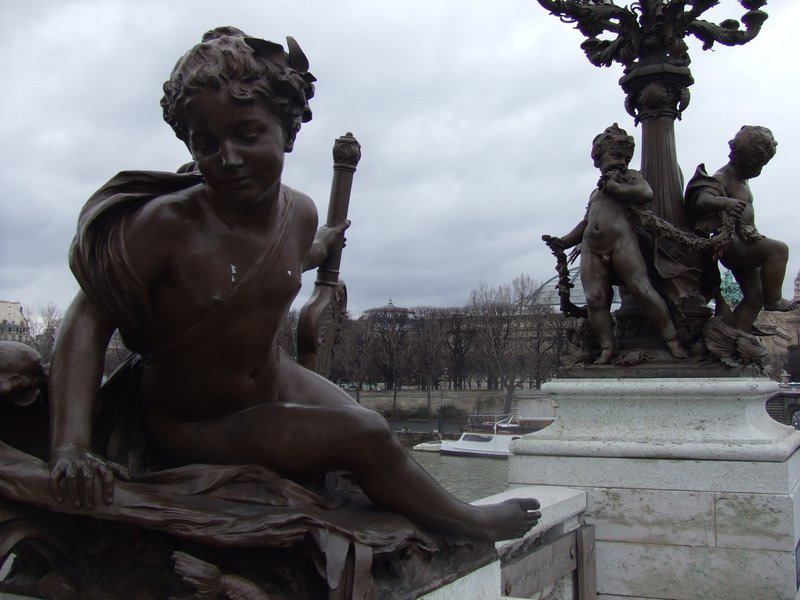 Now we move on to Léopold Morice’s “Fillette à la coquille” which is perhaps my favorite of all the sculptures on the bridge.  She listens intently to the sound of the ocean so magically captured by the hollow chambers of the conch shell, a subtle smile touching her lips: 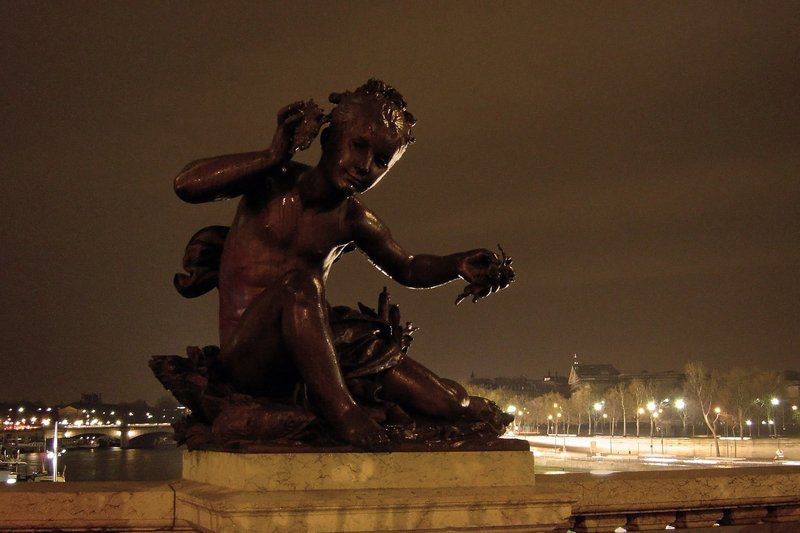 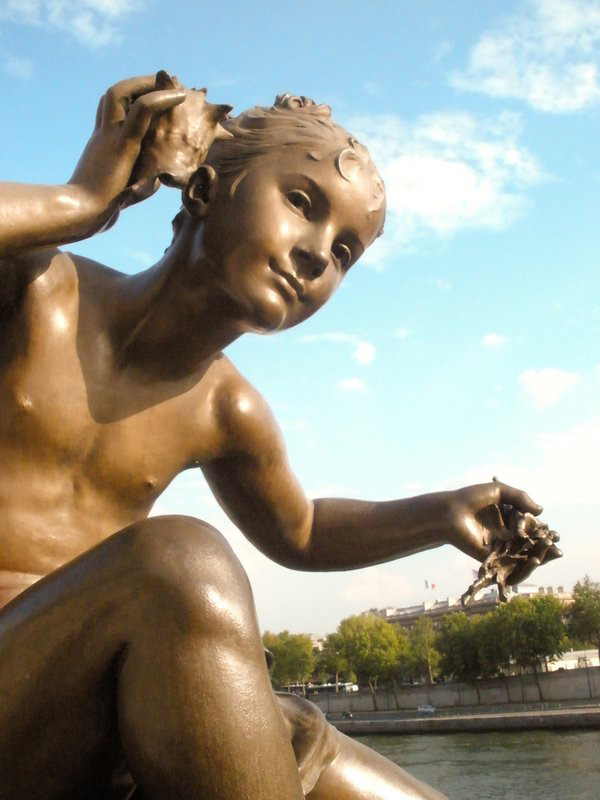 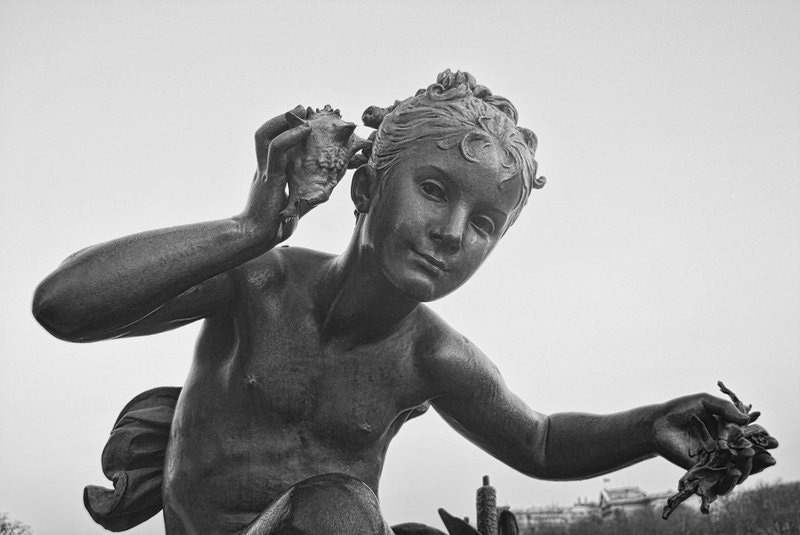 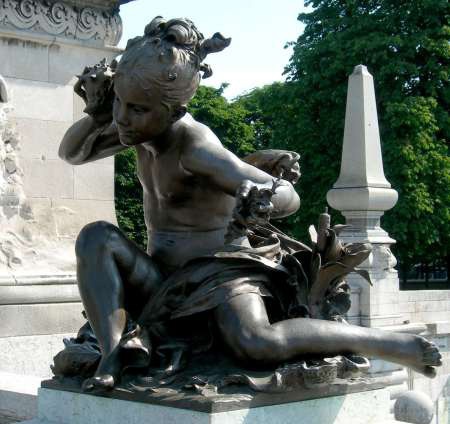 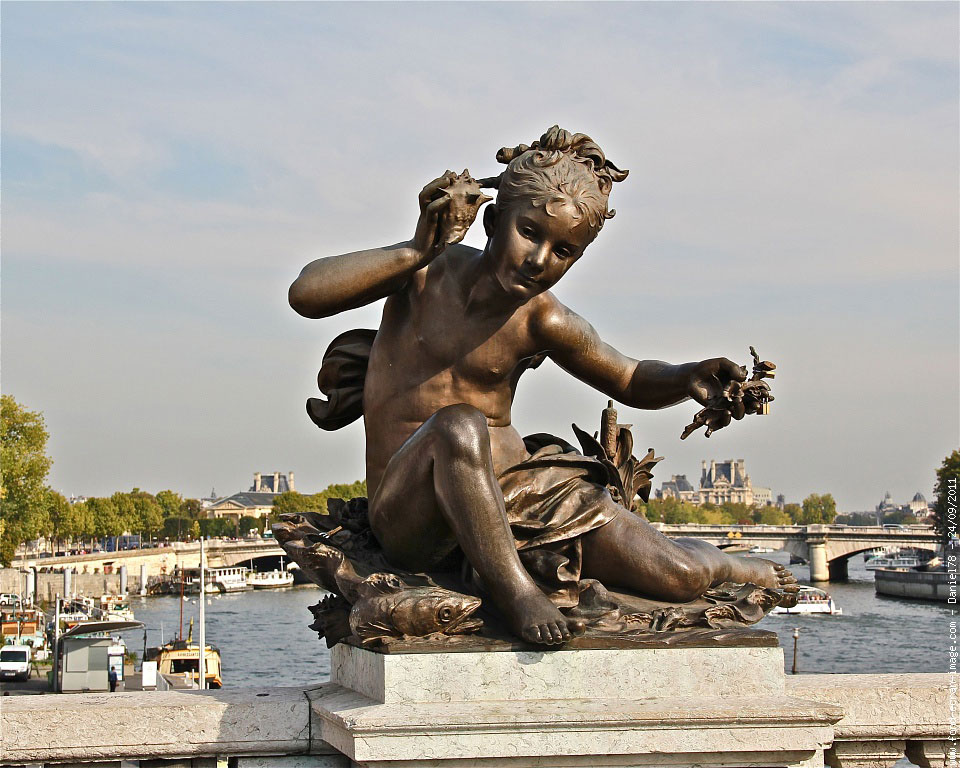 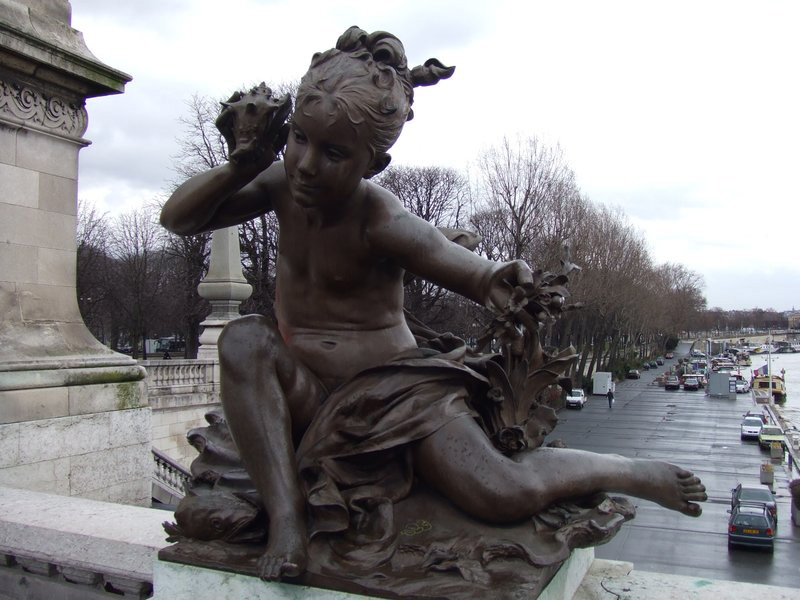 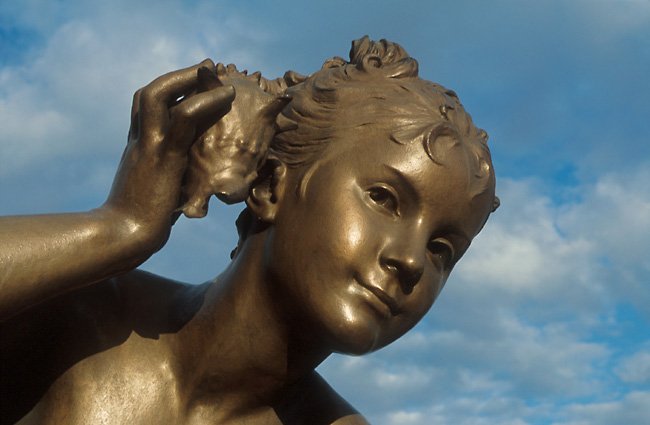 Also, here is the French Wikipedia page on the Pont Alexandre III, which gives a far more detailed account of the various artists that worked on the bridge as well as the history of the bridge and its vital specs.