I said in the earlier post on the His Dark Materials series that there were two main reasons I loved these books, the central protagonist and the fact that they’re critical of organized religion.  That’s true, but in fact there’s a third reason which is connected to both and overrides everything else.  While the fantasy and adventure aspects drew me into Lyra Belacqua’s world initially, what really cemented the greatness of the books for me was the way Pullman treated his child characters with respect and honesty.  In fact, the books wouldn’t have worked otherwise.  I despise badly written child characters.  You know what I’m talking about: kids who are little more than one-dimensional foils or MacGuffins for the advancement of the plot.  There is a lot of that in television series, especially cop shows, and the books of writers like Dean Koontz, and almost invariably shows or novels about child abuse are guilty of using kids this way.

I digress. Perhaps the main theme of the series is that the Church (called the Magisterium in Lyra’s world) destroys the spirit of children, almost quite literally, but in reality the Magisterium could be substituted with anyone or anything–whatever they identify as politically–that tries to suppress human nature by relabeling it and making it taboo or illicit. Of course, the Magisterium, like the Church on our world, calls it sin.

More of Lyra with Iorek Byrnison: 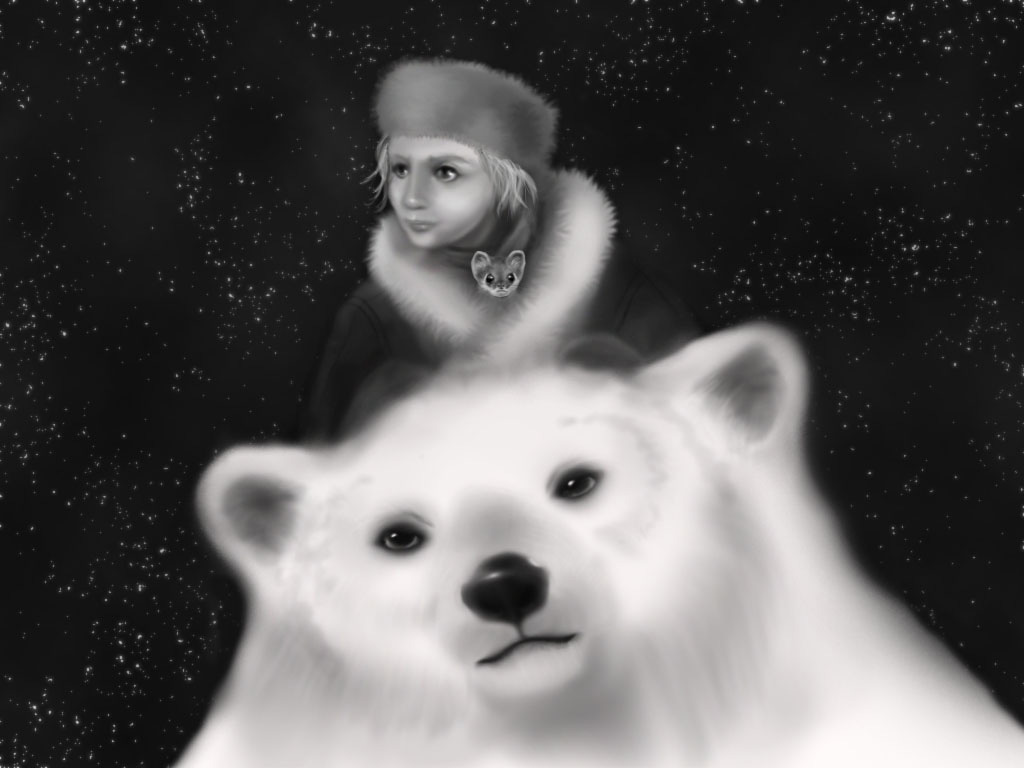 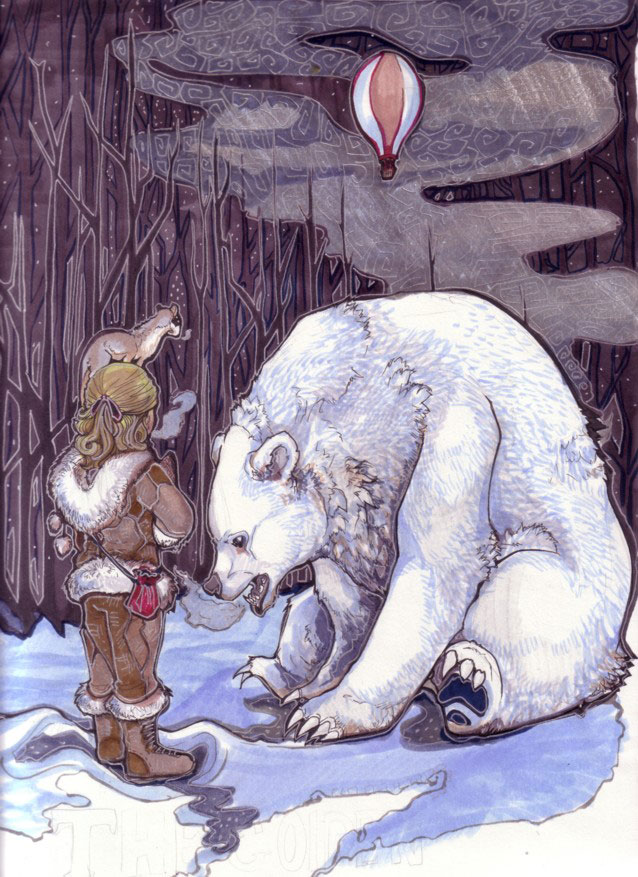 zirofax – The North – The Golden Compass 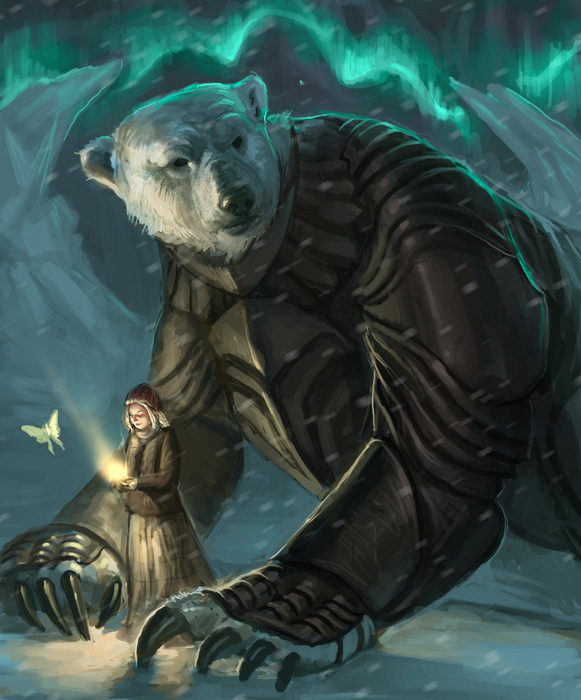 The hardened sap from a particular tree, arranged in a certain away, allows those who look through it to see Dust, particles that settle around intelligent beings, particularly daemons which have stopped their shapeshifting capacity and settled into their final form (this occurs at the onset of adolescence in humans which possess daemons.) The Magisterium mistakenly attributes this tendency of Dust to be attracted to fixed-form daemons as the tainting of the daemon—and thereby the person the daemon belongs to—by sin once the child reaches puberty; hence the Magisterium’s desire to sever daemons from children before they can become contaminated by Dust (sin). Of course, what they wind up doing is destroying the daemon—a daemon on Lyra’s world being a kind of physical manifestation of their soul—leaving children essentially soulless zombies who die not long afterward. Here we see Lyra peering through a piece of the amber, watching Dust as it drifts about the world: Lyra and her daemon, Pantalaimon: 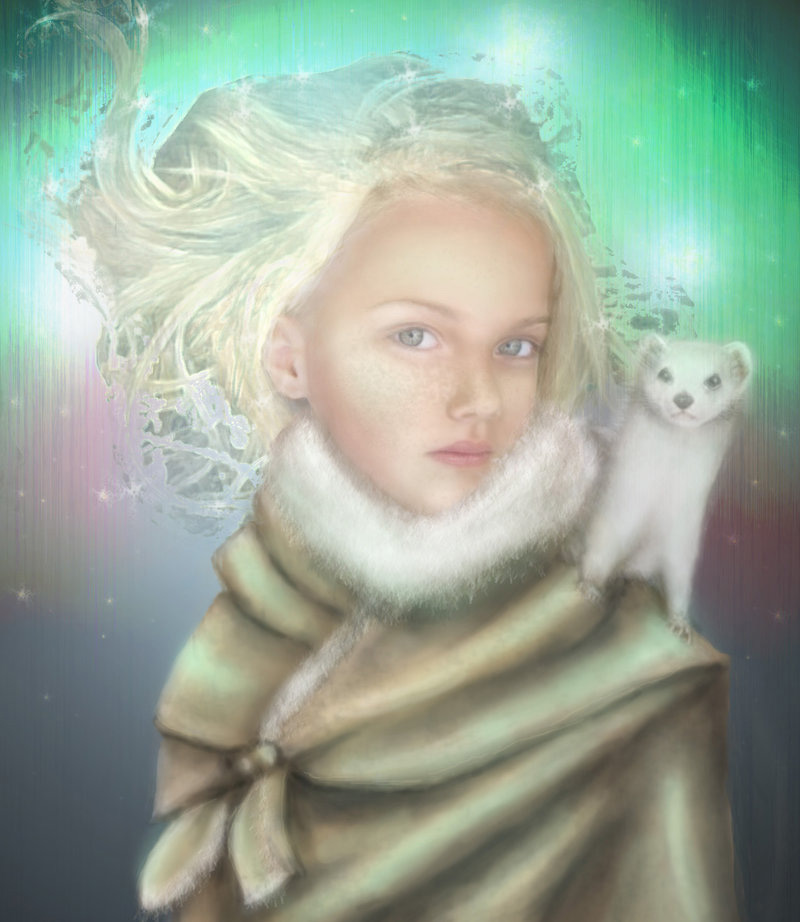 One of the most beautiful—and ultimately most tragic—scenes in the final book is the scene in which Will and Lyra fall in love. These two kids, having just entered puberty, discover the joys and pleasures of each other’s bodies (or so the book strongly hints), but are destined to be separated forever not long after. Thus, they do what comes naturally to human beings . . . yes, even kids. It’s a sweet and romantic scene, which stands in stark contrast to the dirty, sinful picture of sex painted by the Church in our world, and presumably the Magisterium in Lyra’s. 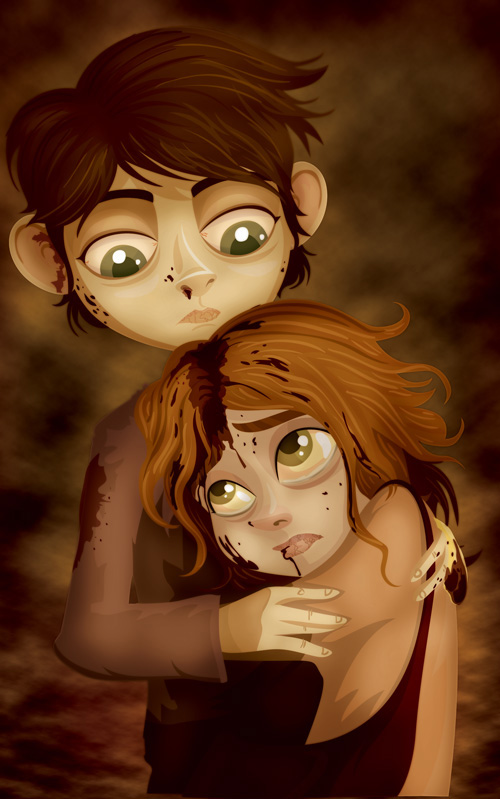 Carlos Lerma – Will and Lyra 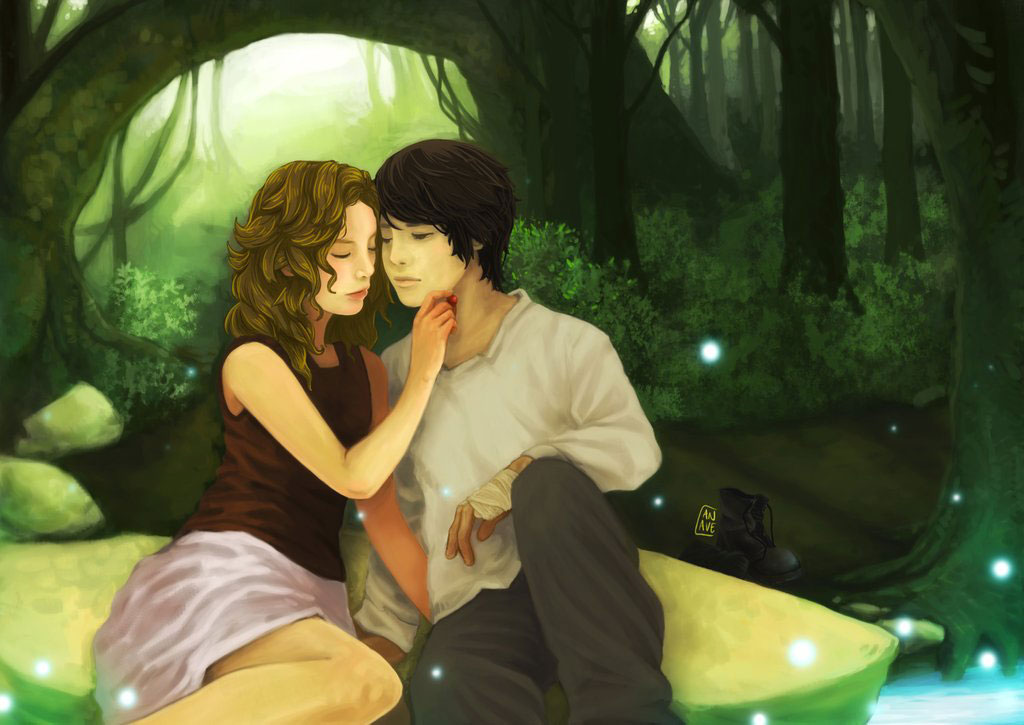 Christian Canave – The Loss of Innocence

Finally, to round out this series, perhaps my favorite piece relating to His Dark Materials is this one by Adam Hunter Peck: 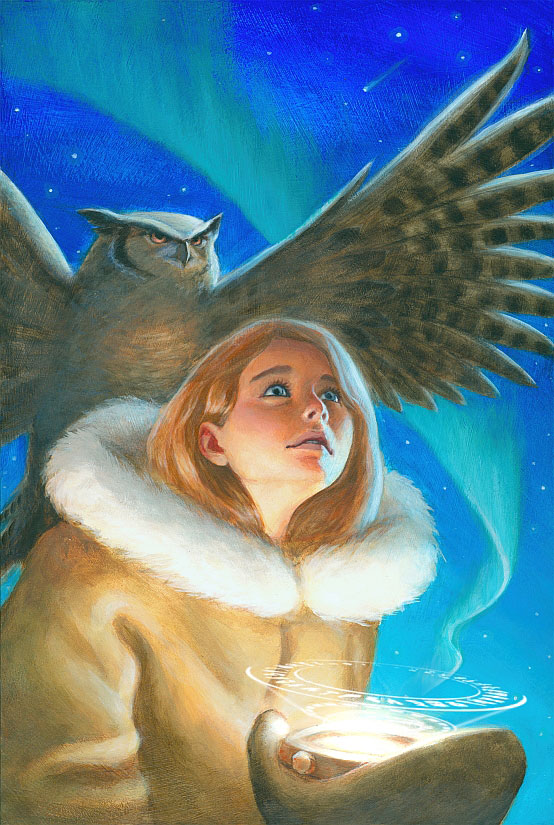 From rodstar1019 on December 25, 2011
The Golden Compass, one of my all time favorite books and I enjoyed the movie as well. The artwork is incredible. There is some real talent present here.

From pipstarr72 on December 25,2011
I count the His Dark Materials trilogy in my top five books & book series of all time. The movie was good–I have it in my DVD collection, but it just doesn’t compare to the books, in my estimation.

From dewimorgan on December 27, 2011
I loved the series, and having lived in Oxford, I loved the places they explored. It was like seeing my old haunt through new eyes. But somehow I think the series sort of lost its appeal for me after the first book.
It’s natural that as the story progressed, their concerns would become so much vaster, but I felt that I cared less about them because of the sense of scale, than when their concerns were just whether they’d get told off by the nursemaid in Oxford.
They became (as you’d expect from a coming of age story) less “children done right” and more “young adults”, and that was just a less magical thing, despite the great affairs around them.
If you like animé, another creator that I’ve always loved for his Children Done Right is Miyazaki: Totoro was the first one I noticed it in – it really made me go “crikey, that’s SO much better a depiction of kids than I’ve seen in animation before!” – though Grave of Fireflies, Spirited Away, and several others are well worth a look.

From pipstarr72 on December 27, 2011
We are definitely different then, because personally I’m a huge fan of epic fiction. The scale of the story in fact gave the reader a deeper sense of the vulnerability of the characters, I think, similar to the semiotic effect in film of pulling far away and hovering above the characters. And all the new exotic worlds and characters just increased my awe and keyed into my imagination. The bildungsroman aspect of the books was an essential part of what Pullman was going for, as you yourself point out, which makes sense because any child that went through what Lyra and Will go through are bound to mature emotionally. That’s just good writing. Characters in well-written stories are dynamic, and that this story coincides with Will and Lyra being on the cusp of adolescence means that they were bound to grow up as the story progressed. I really don’t understand your complaint there, as it would’ve defied realism if they hadn’t taken on aspects of adulthood along the way. I also disagree that this was less magical. For myself I see the onset of adolescence as perhaps the most magical time of our lives because we are changing very quickly. It’s not always pretty, I’ll grant, but it is certainly fascinating.
I’m definitely a fan of Hayao Miyazaki’s work and have most of his films, including Grave of the Fireflies, a relentlessly sad film but one that everyone should certainly see. I would also love to see the live-action version if I can ever get my hands on a copy with subtitles.

From dewimorgan on December 27, 2011
…there’s a *live action* version? Crikey. I don’t know whether to be delighted, or sad. Live action versions are usually a very pale imitation.
I completely agree with you about the character development in the stories. It was exceptionally well done. But for me at least, one of the things about coming of age is the sense of loss.
Combine that with the “mentors must die” and “last level is an alien world” tropes (my two personal least favorites), and the inevitable problem with every sequel that the content is no longer new to the reader… and I suppose it’s natural that I don’t find the later books as magically delightful as the first.
But yeah – they’re still great books, and I suspect Lyra’s Oxford will be aimed right at my mind’s delight-spot.

From pipstarr72 on December 27, 2011
Yes, apparently there was a live-action version of Grave of the Fireflies, though I don’t know if it made it into the English-speaking world. I just recall reading about it somewhere. Both versions were supposedly based on a famous novel, and, if I recall correctly, the live-action version preceded the Studio Ghibli version. By the way, I’m not hugely into anime and manga the way some people are, but I do tend to seek out the quality stuff. I’m much more into European comics, particularly the works of people like Moebius (whose short piece “The Apple Pie” I have put up here, along with a pretty solid critique, I think), Jacque Tardi and the like, and a lot of American indie comics. The central problem I have with anime is that there’s just not enough aesthetic variation in it for me. I know the Japanese are big on tradition, but you can take that too far. I love that their culture embraces comics so thoroughly, but they need to expand their aesthetic horizons.
I don’t recall Lyra’s mentor(s) dying in the story. Her parents died (sort of) but her mom was one of the villains and her dad was fairly emotionally distant and was never really a father to her. I think you’d be hard-pressed to call either of them mentors, even though both assist the kids at certain points in the story, though usually towards their own ends which just happened to be beneficial to Lyra. I mean, Lyra basically raised herself at Oxford, and all the other adults whom Will and Lyra encounter along the way and who help them in various capacities live, as I remember it. But it has been quite awhile since I’ve read them, so don’t quote me on that. The alien worlds . . . well, the whole series is mostly set on alien worlds, or more accurately, alternate versions of Earth, excluding the segment set in the Land of the Dead.

Yep, definitely a great series. Lyra’s Oxford I have not read, but whenThe Book of Dust comes out I’ll probably pick up both.