Daniel Lezama’s paintings are a study in contradictions.  While his style harkens back to the likes of Velazquez, it also incorporates something of the modernist aesthetic.  Stylistically and thematically his art is rooted both in traditional and contemporary modes, suggesting something strangely outside of its time and place.  There is a gravity of candid, earthy sexuality in his work from which even his child subjects cannot escape.  Indeed, often the children are the focal point of the works, their blatant carnality transformed into the language of sociopolitical subversion.  His subjects are at once frankly realistic and laden with a nascent symbolism connected to the duel cultures of Mexico and America that Lezama inherited. 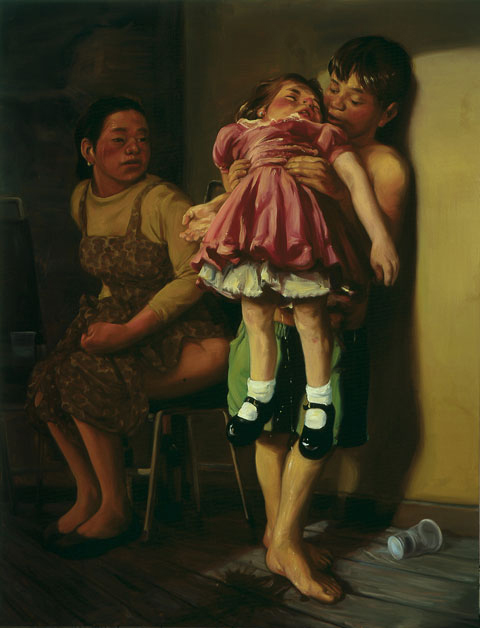 From Walker on May 18, 2011
Very interesting. The girl in “La Venus, el Rebel” is a painted version of the girl in a 1950s photo by George Platt Lynes, though in the photo there were no cars or men.

From pipstarr72 on May 19, 2011
Good eye! You are absolutely right. I never noticed it before, but that was clearly the model for the girl in that piece.