Few painters, alive or dead, have obtained the instant recognizability that Edvard Munch has.  His painting The Scream has moved into iconic status, alongside such works as Da Vinci’s Mona Lisa and Van Gogh’s Starry Night.  Another Munch that is almost as recognizable (and certainly as important) as The Scream is Puberty.  As with many of Munch’s paintings, the subject is overshadowed by a darkness which represents impending death.  Thus, Munch casts the physical attainment of adulthood here in negative terms, as one step closer to the grave.  This was not an unusual view in 19th century Europe; the prevailing attitude towards childhood was that it was a state of spiritual innocence that, once lost, could only be obtained again in Heaven, and that the act of reaching adulthood meant the inevitability of both physical and spiritual corruption.  There is also a sexual tension in the work–the young girl sits on a bed, perhaps awaiting someone who intends to deflower her.  She stairs straight out at us, thereby casting the viewer of the painting as her potential lover.  The girl appears nervous and a little sad. 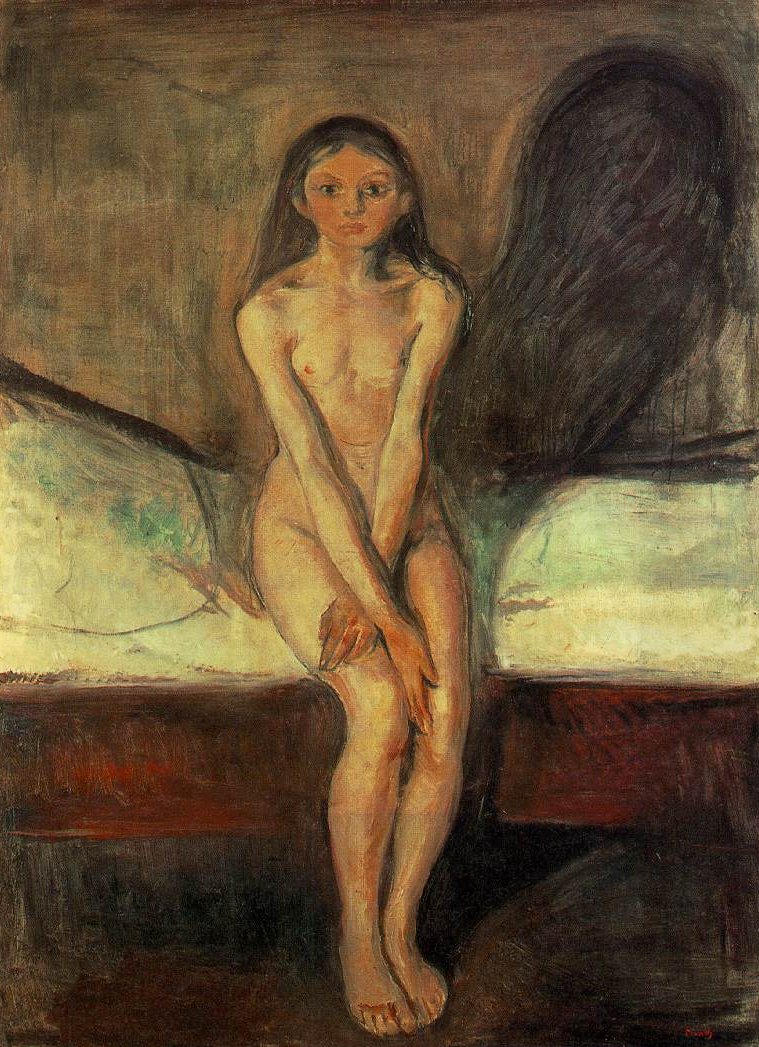 I found it interesting that this painting makes a brief cameo in the film adaptation of Alan Moore’s comic series V for Vendetta, which deals with an alternate-world Britain where fascists have taken over the government.  V, the hero of the story, keeps an underground museum (called the Shadow Gallery) filled with works of art and literature confiscated and censored by the state.  If you watch the background scenery when V first brings Evie into the Gallery, you’ll notice that one of the works V has “reacquired” from the state is Edvard Munch’s Puberty, though you have to look quickly for it.*  One wonders if this was perhaps a subtle commentary by the makers of the film on the current degree of paranoia and censorship surrounding nudity and sexuality of children in art.  If so, they could not have chosen a more ironic piece, given that Munch himself mistrusted sex and attributed to it rather negative qualities in his work.  Nonetheless, it is an important painting, and the implication that fascists would fail to understand its meaning and would see it simply as an obscene picture of a naked young girl rings completely true.

As Victorians often viewed childhood as a kind of Garden of Eden in miniature, ruined by the inevitable truth of growing up, many Victorian artists chose to portray children in much happier circumstances and settings, and Munch was not immune from this trend, as one can see by the joyfully naked and playful girls in Bathing Girls.  However, Munch, a ruthless cynic, more often than not forces even young children to face mortality, their own and others’, at a very young age, and thus they lose their innocence well before puberty. 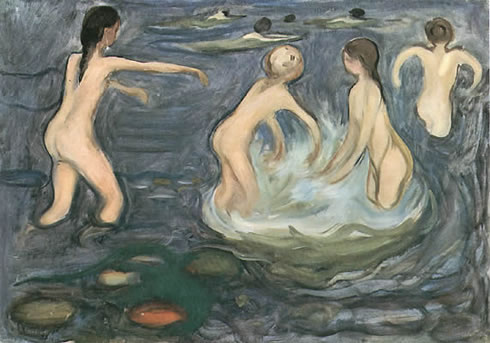 Munch did several nearly identical variations on this next piece, The Sick Child.  Here are two of them: 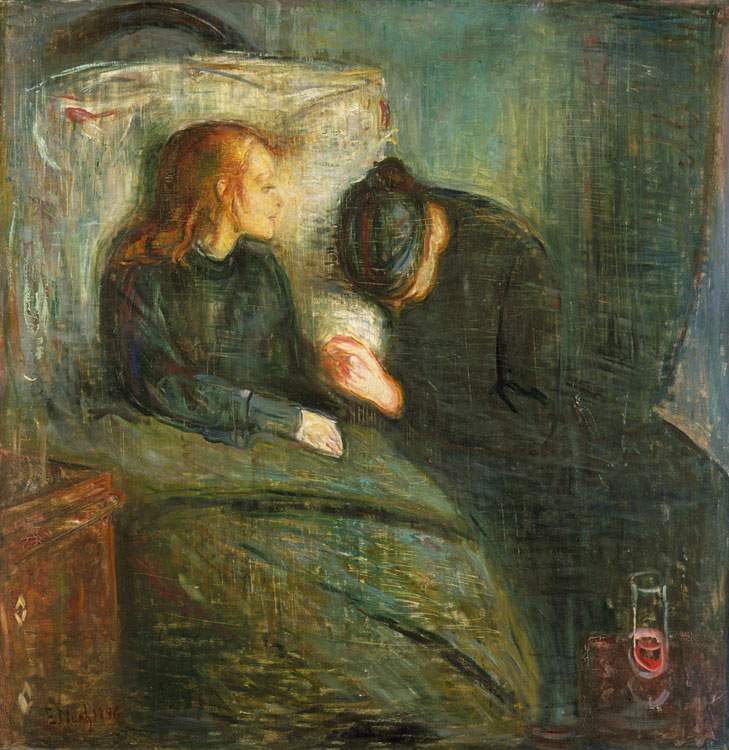 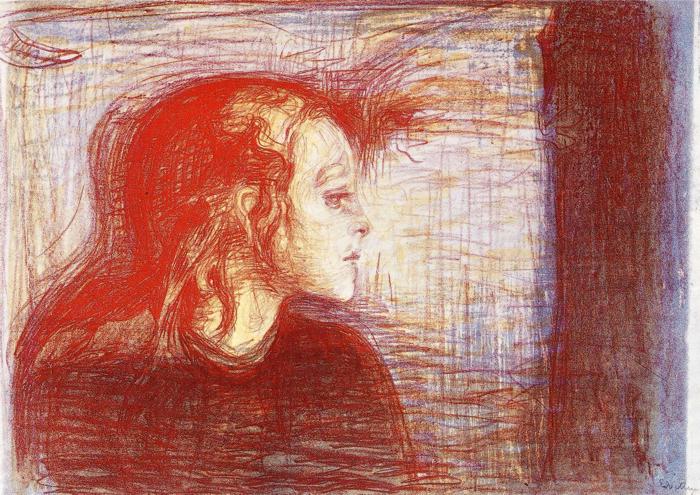 He also did a few variations on The Dead Mother: 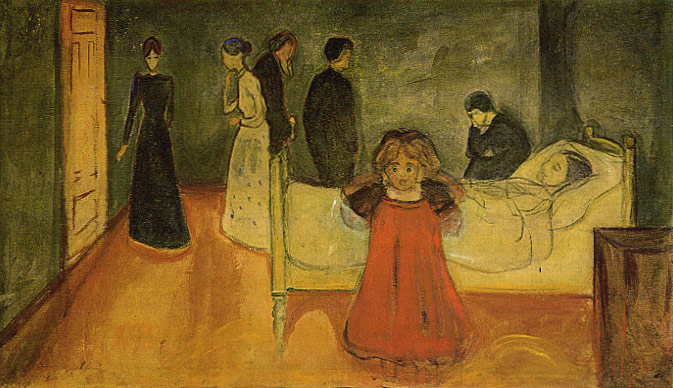 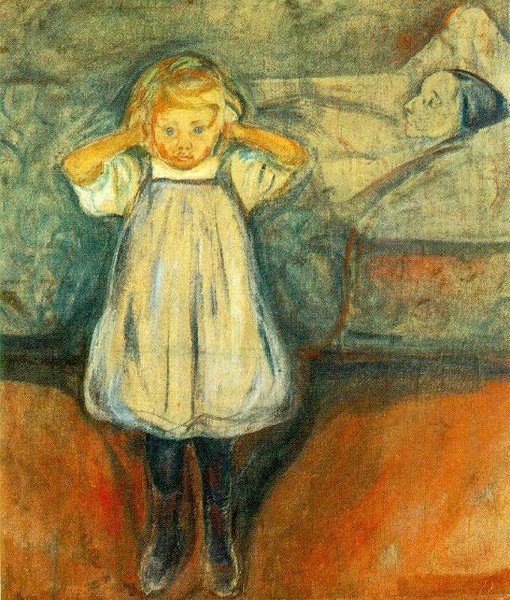 Even his relatively lighter-themed paintings often have an almost palpable gloominess and macabre aspect to them: 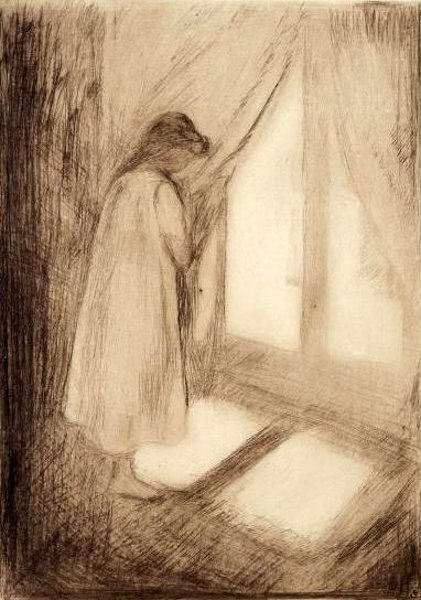 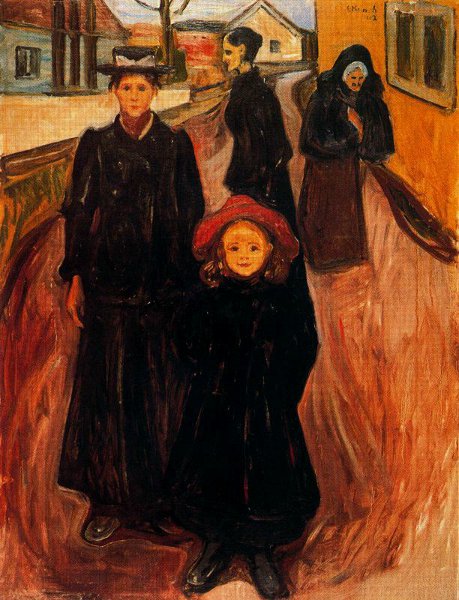 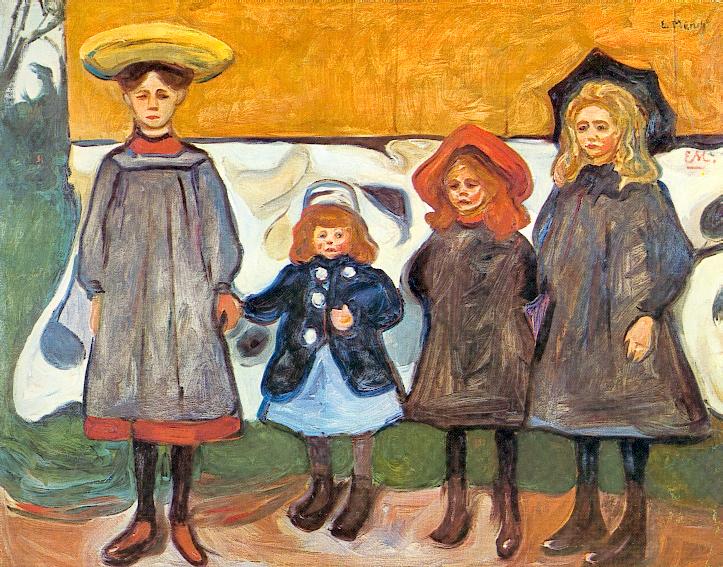 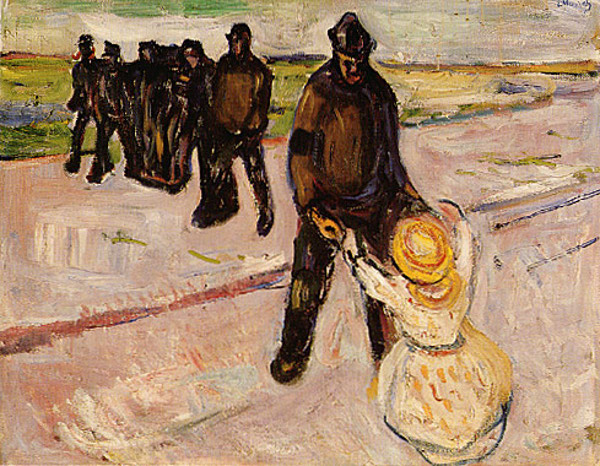 Edvard Munch – The Dance of Life

* You can see it in this clip, about 25 seconds in, hanging on the wall near the bottom left-hand side of the screen.