So, this post will be kicking off a series that will focus exclusively on the theme of Alice in Wonderland, the most famous—and most published—children’s book ever.  The book, the full title of which is Alice’s Adventures in Wonderland, and its sequel Through the Looking-Glass, and What Alice Found There were the brainchild of Oxford professor and clergyman Rev. Charles Dodgson, better known by his pen name Lewis Carroll.  Carroll was not only a mathematics professor and scholar, an author and a church leader (as if those things weren’t enough), he was also a brilliant photographer—one of the best of his day.  Carroll’s favorite subject—in life and in art—was the little girl, and many of his extant photographic works are of young girls, including the one who inspired him to write his famous book.  That girl, Alice Pleasance Liddell, is this month’s ‘Eye on Alice’ topic, and why not?  After all, she was the one who started it all.  Helen of Troy’s face may have launched a thousand ships, but Alice’s face has launched millions, maybe billions, of adventures into those realms dreamt up by Carroll over a century ago, and inspired some of the most amazing art by thousands of artists since its initial publication.  That Carroll may have been in love with little Alice (and fraught with sexual feelings for young girls in general) has been surmised by many a scholar, and I’m inclined to agree.  What I don’t believe is that Carroll was ever anything but a proper Victorian gentleman in the presence of the girls he adored, including Alice.  Nevertheless, he did manage to capture for posterity several images of his infantine muse and her sisters, the girls who accompanied him and a friend of his on a boat trip on the day that the story was born.

(Note: before I launch into this proper, I would like to point out that there is simply so much subject matter about Alice in Wonderland that I cannot even come close to doing it justice here.  It deserves its own blog, and indeed there are several I’ve encountered in my own journey across this digital wonderland called the Internet, though ultimately none have captured the full breadth and depth of artistic styles, incarnations and visions inspired by the literary source.)

As I’ve already mentioned, Carroll took several photos of Alice Liddell, though the best known one is “Portrait of Alice Liddell as the Beggar Child.”  Francine Prose describes it in her book The Lives of the Muses:

“The child is exceptionally beautiful.  The bright black coins of her eyes, the unblemished pale flesh ever so lightly grazing the rough, mossy stone, the perfect ankles and feet, the slightly prehensile toes curled among the nasturtiums, the ragged costume nearly comical in its carnal suggestiveness, the crisp regularity of her features, the gleam of her hair, the naturalness of her posture, the confidence of that crooked elbow and the hand at her hip, the artistry of this composition, the graceful pose that seems so integral and ideally suited to the photograph–the cupped hand, the beggar child’s supplication, not extended toward us but staying within the picture plane, more ironic, knowing, and withholding than importuning–a pose so apparently effortless that we take its elegance for granted until we compare it with another photo of Alice in the same beggar’s rags, a more frontal and literal-minded shot in which the girl’s hands, joined before her, resemble a baby seal’s flippers.”

“Finally its the gaze that holds us and makes the photo seem so unlike any other portrait of a child–or an adult.  It’s the subtlety and complexity of Alice’s expression, the paradoxical mixture of the sly and straightforward, the saucy and serious: the intense concentration that Alice brought to Dodgson’s portrayals of her as a child, the boldness that singled her out of family groupings and then disappeared, subsumed by self-conscious melancholy, as Alice passed the age at which the child-friends ceased to interest their attentive adult companion.” (Prose, pp. 66-67) 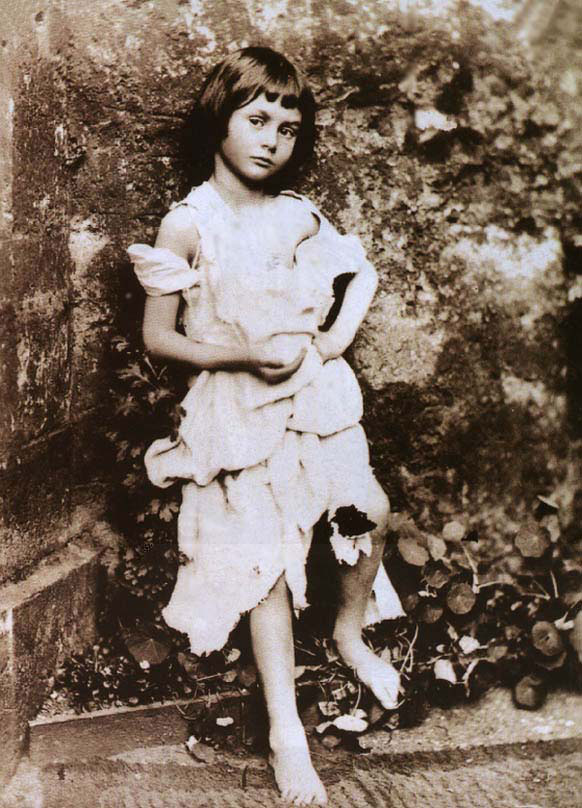 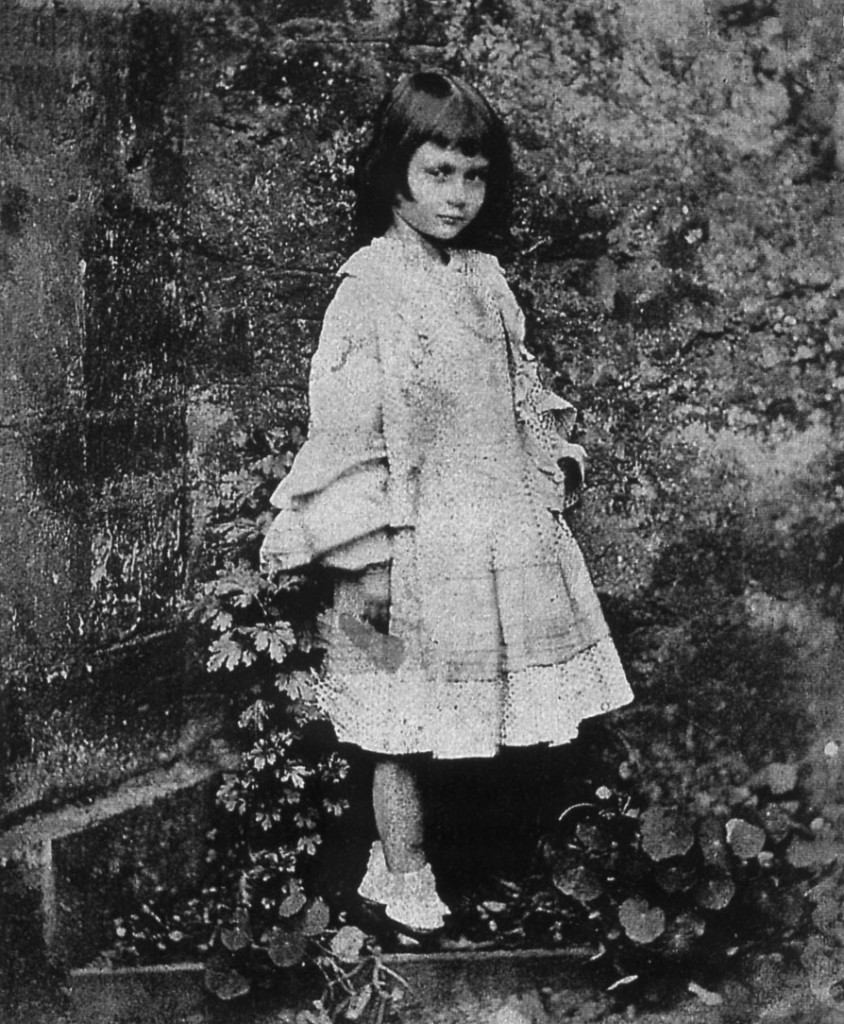 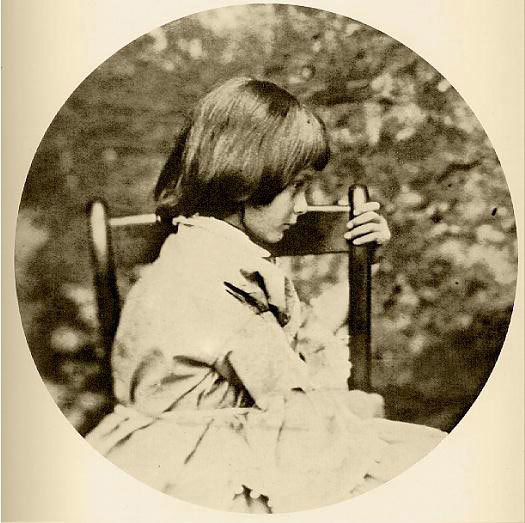 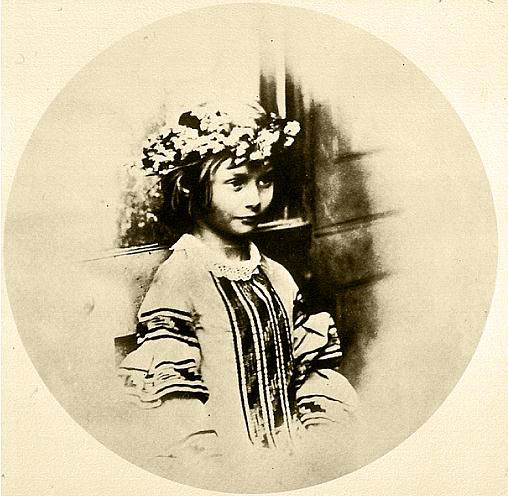 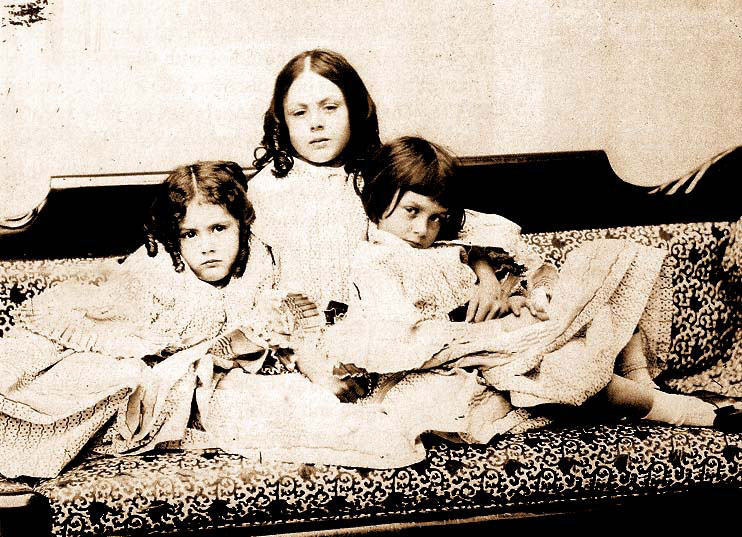 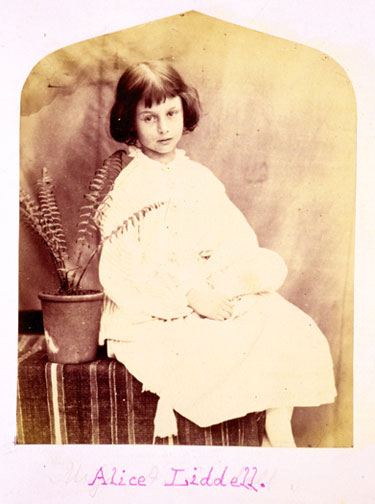 Some excellent Alice in Wonderland and Lewis Carroll web resources:

The Hunting of the Snark

The entire original version of Alice in Wonderland can be read here.

2 thoughts on “Eye on Alice: The Muse”